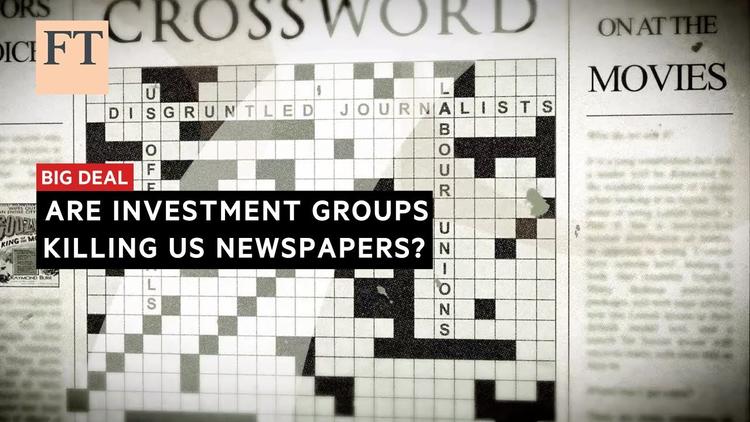 Profit maximizing in the newspaper industry is corroding the knowledge base that sustains government by the people.

( Inequality.org ) – Has the unthinkable, the Swedish political scientist Bo Rothstein mused earlier this month, now entered the realm of real possibility? Could democracy in the United States be disappearing?

Millions of Americans are worrying about that same question — and we have plenty of cause for worry, everything from gun-toting militias and the continuing dysfunction of an archaic constitutional order to brazen attacks on the impartiality of our election administrators.

Our overflowing list of dangers to American democracy now has another dagger: the private equity industry. New research out of the NYU Stern School of Business and CalTech vividly details how private equity greed grabs in the newspaper sector are eviscerating local news coverage, dumbing down our politics, and undermining our democratic future.

What exactly do private equity firms do? They typically take on debt to buy up companies and then shift responsibility for that debt to the companies they’ve acquired. That, of course, puts pressure on the acquired companies to operate “more efficiently,” private equity’s standard jargon for squeezing workers and shortchanging consumers.

That combination has helped turn private equity, observes the Private Equity Stakeholder Project, into a “billionaire factory” that’s creating “eye-popping wealth” for the executives perched at its summit.

“Between their yachts, mansions and private jets,” the Project adds, “these private equity executives live some of the lushest lives of anyone on the planet.”

Progressive lawmakers in Congress last fall introduced legislation that targets the most glaring outrages in the private equity playbook. Senator Elizabeth Warren, a sponsor of that reform legislation, gave those outrages an apt rundown.

“Private equity firms,” she related, “get rich off of stripping assets from companies, loading them up with a bunch of debt, and then leaving workers, consumers, and whole communities in the dust.”

The Warren-backed bill, the Stop Wall Street Looting Act, would put private investment fund execs “on the hook for the companies they control” and empower both workers and the pensions funds that have billions invested in private equity deals. But this legislation has next to no chance of passage in the current Congress.

In a just-released new report, Private Equity’s Dirty Dozen, the Public Accountability Initiative and the Private Equity Stakeholder Project expose how private equity kingpins like the Blackstone Group’s Stephen Schwarzman are investing massively in oil pipelines, coal plants, and offshore drilling. These environmentally hazardous investments, the report points out, only add to the destruction and chaos private equity has created in the retail, restaurant, and prison industries.

But private equity’s impact on democracy writ large, suggests the new research from CalTech and the NYU business school, may be even more insidious than the profiteering on display in all these individual economic spheres.

We’re not talking here about the impact of the political contributions private equity moguls are so generously bestowing upon pliant politicians. We’re talking about a danger much more subtle: the cratering impact private equity is having on civic engagement, the lifeblood of any culture that professes to be “democratic.”

CalTech’s Michael Ewens and Arpit Gupta and Sabrina Howell from the NYU Stern School have focused their new ground-breaking research on how private equity ownership has been steadily transforming the newspaper industry. Back in 2002, private equity funds owned only about 5 percent of local newspaper dailies. By 2019, the private share had nearly quintupled, to 23 percent.

What impact has this hefty private equity presence had on America’s newspapers? Ewens, Gupta, and Howell have examined the performance of some 262 private equity-owned dailies. They’ve unearthed the same sort of cost-cutting zeal that private equity firms have inflicted upon other economic sectors.

Private equity-owned papers, for starters, have cut staff, with the number of reporters down an average 7.3 percent and the number of editors down 8.9 percent. These lost jobs, the CalTech and NYU analysts show, aren’t just stressing the families of the newly jobless. They’re stressing our democracy.

How so? With fewer reporters and editors on staff, private equity-owned newspapers are producing and publishing significantly less “local content.” They’re focusing more on content that can be “centrally produced and cross-syndicated to many newspapers within the same ownership structure.”

This reliance on canned content unrelated to the communities private equity-owned newspapers purport to cover is sapping the vitality of entire local media universes.

“Local newspaper reporting often spills over beyond the paper’s readership,” researchers Ewens, Gupta, and Howell explain, “because local TV and especially social media rely on it as a source of information about local government issues.”

In other words, the analysts add, “changes to newspaper content can affect public knowledge far beyond” an individual newspaper’s readership.

Private equity buyouts also “increase the fraction of people” who have “no opinion” about their locally elected member of Congress.

These dynamics, add CalTech and NYU analysts Ewens, Gupta, and Howell, are helping to “nationalize” local politics. Work by other researchers, they note, has established that voters with less exposure to news about local candidates become “more likely” to apply national and more partisan perspectives to local elections, “even though the policies at stake — such as local infrastructure projects or school programs — have little to do with the national, partisan issues.”

Newspapers historically, the CalTech-NYU team notes, “have been essential — especially in the U.S. — for maintaining citizen engagement and policymaker accountability.” Private equity, with its “high-powered incentives to maximize profits,” has had an “unambiguously negative” impact on this historic role so “crucial for local government accountability and, ultimately, a functioning democracy.”

The best cure for the plague of profit maximization that private equity has inflicted upon the newspaper industry? That may well be the growing movement for nonprofit local journalism. In cities and counties across the United States, troubled commercial local news properties are converting to not-for-profit status, reports Jim Friedlich of the nonprofit-boosting Lenfest Institute for Journalism. Among the hopeful signs that Friedlich is tracking: the expected launch this spring of the nonprofit Baltimore Banner and the looming Chicago Public Media acquisition of the Chicago Sun-Times.

The long-term success of “nonprofit news,” Friedlich believes, will depend upon nonprofits “becoming a much larger and smarter business.”

But a truly democratic news media culture is going to take more than business acumen and capital from “enlightened” deep pockets. Creating a news media system truly accountable to the public is going to take public support, the same sort of support that created public education.

And where could the funds for this public support come from? How about starting with some serious new taxes on the grand fortunes of private equity moguls and their billionaire pals?