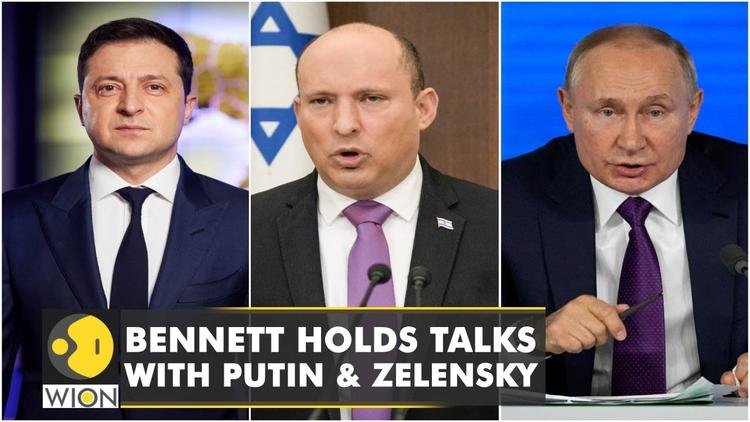 Ann Arbor (Informed Comment) – Al Jazeera reported on Israeli Prime Minister Naftali Bennett’s three-hour meeting in Moscow with Russian President Vladimir Putin on Saturday. The meeting was advertised as a mediation attempt, but Israel is not in a position to mediate with Putin. Mediators to a conflict usually bring wealth or power to the table. Bennett was just carrying messages from other governments. Part of Bennett’s concern was the 200,000 Ukrainian Jews who are eligible to immigrate to Israel, and perhaps he sought some sort of safe passage for those who wanted to do so.

The meeting was in part a way for Bennett to escape US pressure on Israel to condemn Russia more forthrightly. Although the U.S. gives Israel billions every year, Tel Aviv either declines to or has been unable to offer the U.S. very much in return. It may offer some intelligence, but it was the Syrian Kurds and the Iraqi Shiites who helped the US defeat ISIL, for instance.

Only after vigorous US lobbying did Israel even decide to vote against Russia’s invasion of Ukraine at the UN General Assembly. The US also convinced Israel to lobby the United Arab Emirates, which has extensive business ties to Russia, to vote against Moscow, as well.

It is possible that the far-right Bennett also is wary of the precedent of boycotting aggressor states who invade and occupy their neighbors, since most of the world views Israel’s seizure and occupation of the Palestinian Territories in 1967 in the same light that they view Putin in Ukraine.

Anyway, a vote at the UN General Assembly is pretty toothless.

Now, Germany has accepted significant hardship by placing the Nordstream 2 gas pipeline in jeopardy, and other allies are taking an economic hit by stopping their trade with Russia. Israel isn’t willing to make those sorts of sacrifices.

It would not even be a big sacrifice. Israel does only a minor amount of business with Russia annually, importing $1.5 bn in goods and services annually and exporting $500,000 mn. In contrast, Israel’s exports globally in 2021 were $135 billion.

In some ways, Israel is over the barrel, since Russia is its de facto neighbor, given the heavy presence of the Russian military in next-door Syria. Israel also has a big population of Russian immigrants, some 900,000 recognized Russian Jews and another 300,000 or 400,000 Russians who are not recognized by the Chief Rabbi as Jews because they had a Russian Orthodox mother. It is not clear that all of these Russians have distanced themselves from Russian nationalism, and strongly condemning Russia or breaking with it diplomatically and economically could become a domestic political issue.

Last week Israel had expressed concern about continued security coordination in Syria, but received reassurances from Moscow on that score. The Russian ambassador said that the coordination had proved its effectiveness and would continue.

Russia intervened in Syria in 2016 to prop up the Baath regime of President Bashar al-Assad, using massive aerial bombardment of civilian cities. Iran had already intervened, inviting into the country Shiite paramilitary auxiliaries in the form of the Lebanese party-militia Hezbollah and Iraqi militias to reinforce the ground troops of the Syrian Arab Army that had been depleted by desertions. Russia entered into an alliance of convenience with Iran and its allies. Israel was of two minds about Russia propping up al-Assad, but most of its security analysts preferred the Baath dictator to the Muslim extremists who were prominent among the rebels. But, Hizbollah getting battle experience and having the run of the entirety of the Israeli border, being stationed in both southern Lebanon and in Syria was unacceptable to Israel. Moreover, the Israelis did not want Iran using Damascus airport to bring in rockets for Hezbollah to take by truck overland to Lebanon.

The Israelis lashed out at Hezbollah weapons convoys in Syria, which annoyed Russia since Hezbollah was helping defeat the rebels and achieve the goal of keeping al-Assad in power. President Vladimir Putin, however, got really furious when Israeli strikes on Hezbollah came close to injuring Russian technicians and support troops at Syrian Arab Army bases. Putin told the Israelis there would be hell to pay if they killed Russian troops. On the other hand, Putin was annoyed with Hezbollah for using the Syrian intervention to plot out potential attacks on Israel and for moving Iranian weaponry to Lebanon.

So the two sides appear to have worked out an understanding. Russia did not mind if the Israels hit Hezbollah while it was engaged in arms smuggling or other extracurricular activities but should not interfere with Hezbollah’s fight against Sunni rebels or endanger Russian personnel. Israel would avoid any air strikes anywhere near Russian army troops.

So Israeli Prime Minister Naftali Bennett was afraid that if Israel boycotts Russia for its invasion of Ukraine, Russia might cease trying to restrain Hezbollah and might unleash the Lebanese Shiites on Israel.

The Russian embassy in Tel Aviv told the Bennett government that it had an opportunity for a “smart and diplomatic approach” on the Ukraine issue. The ambassador said he had provided Israel proof that Ukraine had committed war crimes, justifying the Russian invasion, saying Moscow’s goal was to protect the [ethnic Russian] population of Donbass and to uproot Nazism [this is ridiculous – JC]. That is, the Israelis should sit down and shut up.

In essence, Putin is blackmailing Tel Aviv with his position in Syria and his ability to rein in or unloose Hezbollah. Israel has acquiesced in the blackmail.