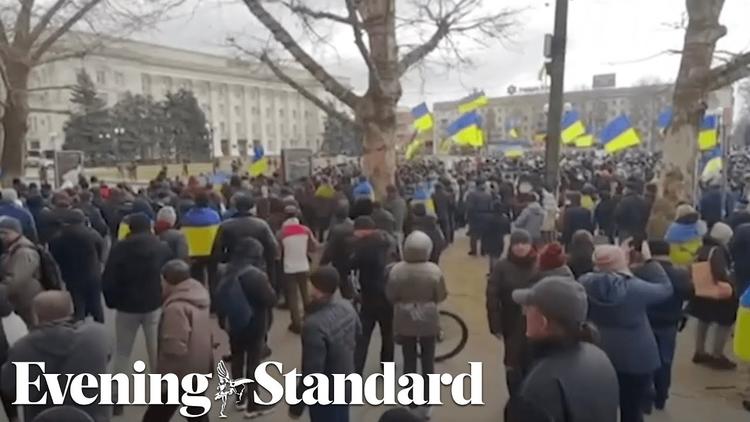 Ann Arbor (Informed Comment) – Raed Qadura writing at Al Jazeera points to the “Hypocrisy Crisis” in the international coverage of Russia in Ukraine versus the way Israel and Palestine are covered.

When hundreds of Ukrainians in the city of Kherson hit the streets to protest Russia’s occupation, they are lionized as brave heroes.

When Occupied Palestinians protest the attempt of government-backed Israeli squatters to invade their homes and steal their land, it is reported in the European and US press, if it is reported as all, as “clashes” between Palestinians and Israelis, as though both sides were equally to blame. Or reporters hint around that Palestinians have an innate tendency to terrorism. In the below clip the BBC characterizes the “clash” as over “a hilltop,” as though Palestinian-owned land were a joke. No one asks, what are Israelis even doing in the Palestinian West Bank, much less stealing more land from its owners?

Here’s what Informed Comment said about it: “Prime Minister Naftali Bennett has agreed with Israeli squatter organizations on the Palestinian West bank to clear roughly 25 acres of land in the Palestinian-owned Jabal Sbeih hilltop area of the town of Beita between Ramallah and Nablus. The government made the deal with armed Israeli squatters ten days ago in preparation for the announcement that the government was taking the land from its Palestinian owners.”

Or there is that justifiable mass outpouring of sympathy for the over a million Ukrainians made refugees by the Russian invasion:

Embed from Getty Images
BERLIN, GERMANY – MARCH 02: People fleeing war-torn Ukraine get food, clothing and toiletries at Hauptbahnhof main railway station on March 2, 2022 in Berlin, Germany. Hundreds of thousands of people, mainly Ukrainian women and children as well as foreigners living or working in Ukraine, have fled the country as the current Russian military invasion continues to inflict growing casualties on the civilian population. (Photo by Hannibal Hanschke/Getty Images).

But there is no, none, nada, zilch, sympathy for the millions of Palestinian refugees created by the aggressive and repeated Israeli invasions of their territory.

Here is a picture of Palestinians chased away to Jordan by the Israeli invasion of the West Bank in 1967:

Embed from Getty Images
WADI DALAIL, JORDAN: Palestinians line up in August 1967 in Wadi Dalail refugee camp in Jordan. After the Israeli army started a lightning war in Syria, Sinan and Jordan the problem of Arab refugees increased without precedent.(AFP/AFP via Getty Images)

Israel says it is their own fault they are refugees and they deserve whatever happens to them and it is anyway Jordan’s responsibility to take care of them now and they can never come back to their former homes, and if they object to any of this they are wretched terrorists.

Under international law, the Israeli annexation of part of the Palestinian West Bank including East Jerusalem to Israel was just as illegal as the Russian attempt to annex Ukraine to Russia. The justifications are even similar. Vladimir Putin claims that Ukraine has always been Russian as a matter of essence, regardless of what the people living in Ukraine might think. Israeli Prime Minister Naftali Bennett claims that the Palestinian West Bank has always been Israeli regardless of what its Palestinian residents might think. The primordial claims of the conqueror trump the rights, the very existence of the forcibly occupied.

On February 25, the 15-member United Nations Security Council, the arbiter of international law, voted by a margin of 11 to condemn the Russian invasion of Ukraine. Russia exercised its veto as a permanent member. But then the 193-member UN General Assembly condemned the invasion by a margin of 141, which was touted by the US as a victory.

The United Nations Security Council (which, remember, is the arbiter of international law), in its Resolution 478 said this about the Israeli annexation of 400,000 Palestinians and East Jerusalem:

“1. Censures in the strongest terms the enactment by Israel of the “basic law” on Jerusalem and the refusal to comply with relevant Security Council resolutions;

3. Determines that all legislative and administrative measures and actions taken by Israel, the occupying Power, which have altered or purport to alter the character and status of the Holy City of Jerusalem, and in particular the recent “basic law” on Jerusalem, are null and void and must be rescinded forthwith.”

As for the UN General Assembly, it has repeatedly condemned the Israeli predations against the Palestinians on their own land, but somehow the US has not taken that as a victory.