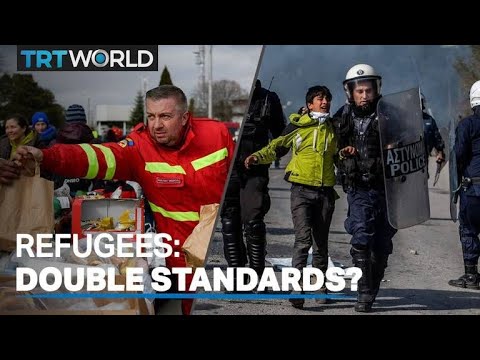 ( Middle East Monitor) – It is probably true to say that most Arabs sympathise with the people of Ukraine in the face of Russia’s invasion of their country. This is due in large part to Russian support for Bashar Al-Assad’s brutal regime in Syria, and the innate sympathy with nations invaded by major powers, not least because Arab states have been among the most invaded and occupied over many decades.

Such sympathy is understandable, but it is being tested by the racism and double standards of Western journalists and politicians. When former Egyptian footballer Mohamed Aboutrika for example, was punished for exposing his t-shirt with “Sympathise with Gaza” written on it when he scored a goal, it was reported to have been against FIFA’s rules about mixing sport and politics. The Western media, however, celebrated the fact that Manchester City and Everton players donned the Ukrainian flag at their match at the weekend.

Political and media statements have been worse in describing the pain of Ukrainian refugees because they are “civilised” and “white, with blue eyes and blond hair”, and are not from “undeveloped and uncivilised” countries like Iraq and Afghanistan. That is the view of more than one Western journalist and politician, but such statements have not been challenged by studio anchors.

Moreover, the Western media hasn’t covered the kind of incidents that would have made the headlines if they had taken place in the Middle East: the prevention of African refugees trying to crossing the borders as easily as white Ukrainians; and the hindering of Indian refugees because their government did not vote to condemn Russia in the UN Security Council. Even the old British colonial tactic of smearing pig fat on weapons and bullets is said to have been adopted by the Ukrainian army before using them against Muslim Chechen soldiers in the Russian army.

Western countries and their “liberal” media have welcomed the Ukrainian resistance and backed European citizens who volunteer to fight against Russia. These are the same countries and the same media that describe anyone who resists the Israeli occupation and tyranny in the Middle East as a terrorist or potential terrorist. Even those giving humanitarian aid to the Palestinians are thus branded by Israel and its allies.

Such contradictions have angered Arab, Muslim and Middle East observers who have made comparisons with such hypocritical positions which have exposed for all to see the truth of the Orientalist views still held by the West. Moreover, we now know — if we need to be reminded — of the injustice in this world at the hands of those who proclaim the superiority of democratic values, equal rights and international law, all of which are clearly applied subjectively.

It is very obvious now that individuals and states pay lip service to equality and equal rights. Instead, they sympathise more with those who share their cultural, religious and historical space. There should, therefore, be no surprise about Western support for Ukraine; it is normal, and to be expected. However, it is not normal for the West to display its prejudices so blatantly while lecturing the rest of us about “universal values”, “justice for all” and other slogans. The West has the right to be affected by the victims in Ukraine more than the victims of Western aggression in Afghanistan and Iraq, but please stop lecturing us about ethics and values. The West has no right to claim the moral high ground in Ukraine or anywhere else.

We Arabs must also look in the mirror, and blame our governments that do not act according to the innate logic of “each to his own”. While Europe opens its doors to Ukrainian refugees, Arab countries have failed the Syrian refugees, with the exception of Jordan, Lebanon and Egypt; the latter to some extent during the era of the late President Mohamed Morsi. Non-Arab Turkey remains a beacon in the region of how to deal with Arab refugees. Nevertheless, Syrian refugees in Lebanon suffer badly from racism, while Egypt doesn’t offer the kind of rights and privileges to Syrian refugees that the Ukrainians are getting in Europe.

The Ukraine crisis has exposed the fact that people’s real feelings and genuine behaviour tends to be revealed in times of hardship. It took just five days of war in Ukraine to test Western sincerity about justice, morality and universal values. What concerns me about this is that Arab neo-liberalism has done everything but worship Western values in the rush to adopt them. What Russia’s invasion of Ukraine tells me is that the alienated Arabs ashamed of their culture should be ashamed of themselves, not their Arab background. Those five days revealed more European inconsistencies than have been exposed by seven decades of defeats inflicted on the Arabs, with Western participation, from the occupation of Palestine to the occupation of Iraq, as well as Western support for tyrants and dictators in the region.

We are all generally the product of our crises, obsessions and problems. This applies to Westerners, Arabs and others around the world. It is natural for Europeans to sympathise with the cause of a European nation with which they share a history, geography and faith. However, we Arabs also have the right to view global issues through the lens of our struggles and issues. It is surprising, therefore (or not, given the extent of Arab neo-liberalism), that some Arab commentators find it too much to remember our tragedies, our issues and our victims in the midst of the Ukrainian war. It is logical for us to look at Ukraine’s refugee crisis and compare it with how the world has treated Arab refugees over the years. Indeed, it is natural for us to remember that it has been the West’s actions and support which created many of the refugees in the first place. Arabs are perfectly justified in mentioning the Israeli occupation of Palestine in the same breath as the Russian occupation of Ukraine. Arab remembrance of their own victims does not detract from their sympathy for the Ukrainians.

There are no benefits or advantages in war — any war — because it is always the poor, the innocent and the weak who pay the biggest price. However, war gives us the opportunity to study history, current affairs and future possibilities. The Russian invasion of Ukraine has, in just a few days, taught us some important lessons about how the West really views Arabs, Muslims and other Middle Easterners, including Arab Christians. It should also have taught us that it is necessary to sympathise with the victims, regardless of their race, gender or religion, while not forgetting our own victims, whether the guardians of the “universal values” myth like it or not.