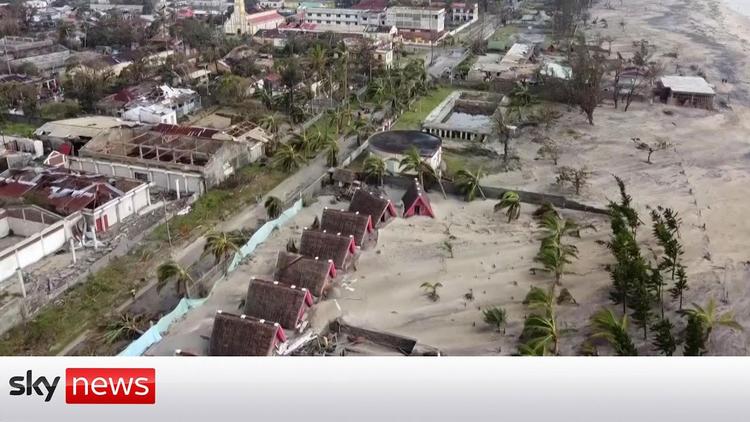 Ann Arbor (Informed Comment) – The UN Intergovernmental Panel on Climate Change has issued its 2022 report and the scientists have bad news for us. This report is far more pessimistic than its predecessors.

The climate emergency is being caused by humans burning coal, petroleum and methane gas for electricity and heating and cooling buildings. When burned, they produce enormous amounts of carbon dioxide, which is a powerful heat-trapping gas. The earth is heated by the sun’s rays, which used to radiate back out to space. Carbon dioxide doesn’t let the sun’s heat dissipate that way, keeping it on earth. We can stop this global heating by getting our electricity and heat/ air conditioning from wind, water, solar and battery sources instead. Scotland, an industrialized country, now gets all its electricity from renewables. Germany gets 40-45 percent of its electricity from renewables. In the US, only 20 percent of our electricity is renewable, and a big chunk of that is hydroelectric, which we have had for nearly a century. So we just haven’t made much progress in this country on a problem that is a thousand times more threatening than Russia or the Middle East or Covid-19.

The scientists conclude that the climate emergency has caused significant damage to the world’s ecosystems, whether on land or in the oceans. Some of this damage is now irreversible.

Further, the damage is greater than estimated in previous reports. Things are getting worse and worse. Because of greater heat at the equator, “Approximately half of the species assessed globally [which number in the tens of thousands] have shifted polewards or, on land, also to higher elevations.”

The US Republican Party may not believe in the menace of the climate emergency, but the animals are far less dumb. They are fleeing for the hills, literally. (Note that I have used “literally” correctly here.)

That 50% of the tens of thousands of species surveyed by the iPCC have moved toward the poles to get away from the increasing extremes of heat is a remarkable, and alarming statistic.

In many habitats, where they did not or could not move away fast enough to escape the impact of the climate emergency, hundreds of species have been lost in local environments. They were killed off by extremes of heat and experienced mass die-offs on land and in the sea. In the oceans, the kelp forests that shelter much marine life have started dying off, followed by the marine life that used to live in them Where species have been lost from all the ecosystems they inhabit, they have become extinct.

Losing species is irreversible. Once they are gone, you can’t get them back. They may have been building blocks in an ecosystem or they may have had unique nutritional or medicinal properties that could have benefited humanity. They’re gone. Other irreversible changes are the loss of ice mass in Greenland and the Antarctic, threatening the collapse of ice sheets that hold back ginormous glaciers that will raise sea level substantially if they plop in.

If we act really quickly and decisively, we may be able to stop more species from dying off and may be able to stop some gargantuan glaciers from plopping in and wiping out Miami Beach and Lower Manhattan. But we can’t get back the species we have already lost to the climate emergency, and we can’t make the oceans go back down. Well, not for maybe 100,000 years.

“Unavoidable sea level rise will bring cascading and compounding impacts resulting in losses of coastal ecosystems and ecosystem services, groundwater salinisation, flooding and damages to coastal infrastructure that cascade into risks to livelihoods, settlements, health, well-being, food and water security, and cultural values in the near to long- term (high confidence).”

Contrary to what that loony Trump says, sea level rise does not give you more ocean front property. It just changes where the ocean front starts, moving it inland. People who own land along the coast will lose it.

If the land you own is on a relatively low-lying island, you may lose the whole island: “Climate change is contributing to humanitarian crises where climate hazards interact with high vulnerability (high confidence). Climate and weather extremes are increasingly driving displacement in all regions (high confidence), with small island states disproportionately affected (high confidence). ”

There is really bad news for people who like to eat food. The scientists conclude, “Climate change will increasingly put pressure on food production and access, especially in vulnerable regions, undermining food security and nutrition.”

The Food and Agriculture Organization says, “A person is food insecure when they lack regular access to enough safe and nutritious food for normal growth and development and an active and healthy life.”

That’s bad. And it is becoming more common because of the climate emergency. How?

“Increases in frequency, intensity and severity of droughts, floods and heatwaves, and continued sea level rise will increase risks to food security (high confidence) in vulnerable regions from moderate to high between 1.5°C and 2°C global warming level, with no or low levels of adaptation (medium confidence). At 2°C or higher global warming level in the mid-term, food security risks due to climate change will be more severe, leading to malnutrition and micro-nutrient deficiencies, concentrated in Sub-Saharan Africa, South Asia, Central and South America and Small Islands (high confidence).”

There is also bad news for people who like to drink water.

The scientists point out that half of us on this globe already face thirst: “Roughly half of the world’s population currently experience severe water scarcity for at least some part of the year due to climatic and non-climatic drivers.”

In some places, access to water is on the decline because we are altering our climate. Forest watersheds are in danger. Massive forest fires are producing organic material that is washed into ponds and lakes, causing them to “brown.” Browning reduces water quality and makes the water taste bad. But for some, the problems are even more dire:

Reduce drinking water by half.

The scientists underline that our fate is in our hands. We can swing into action on an emergency basis and stop using fossil fuels, and if we do that, the earth will stop getting hotter almost immediately. They are not describing an inevitably bleak future. They are giving us a choice between that and getting off our duffs and doing something to prevent it.