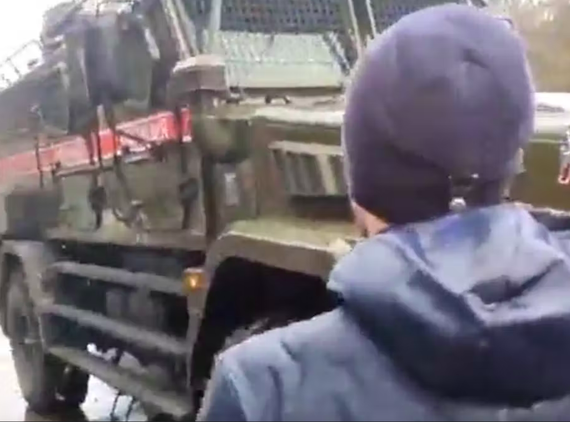 Responses to the Russian invasion have been swift. Thousands of people both in Ukraine and abroad are enlisting to fight against the odds.

Ukrainian men between the ages of 18 and 60 are being forcibly mobilised. An “international legion” is being formed from hundreds of non-Ukrainians volunteers. People across the world are donating money to help Ukraine buy military equipment. Western countries are sending arms.

But could non-violent resistance be an effective or even better alternative?

Advocates of pacifism and nonviolence are often ridiculed as naïve, as dangerous, or even as unpatriotic cowards. Even in academic circles, pacifism is “subjugated” in the sense of being both dismissed and denigrated.

Yet a long tradition of pacifism counts at least one famous Russian among its ranks: Leo Tolstoy. Since he penned his passionate denunciations of all violence around 1880-1910, there has been mounting evidence that nonviolent resistance is more effective than violent resistance, even against despots. Nonviolent resistance also seems to lead to outcomes more respectful of human rights in the long term.

More research is needed on this, but what we do know is that nonviolence makes strategic use of the moral high ground. As Tolstoy would acknowledge, this doesn’t mean violence won’t happen, but the nonviolent protesters risk suffering violence rather than inflicting it. The same principle was put into practice by followers of Gandhi: they knew that violent repression of nonviolent protesters would attract attention.

It’s a brave strategy, and one as potentially risky as facing the enemy with weapons. And it might not work. But it can help shift the moral balance – and with it, the balance of power. It treats opponents as human beings, and could help convince them and their supporters to rethink what they are doing and their allegiances.

It’s not clear that violence always works either. We often assume it does. But any effectiveness depends on the response of the adversary, who might comply, or resist. Meanwhile violence polarises. It hardens resolves. And of course it claims victims, aggrieves friends and relatives, who might in turn seek revenge.

In the case of the ongoing Russian invasion of Ukraine, many would argue that violent resistance meets the stringent criteria of “just war theory”. This is a war of imperialist aggression, of nostalgic power projection, driven in part by paranoia and revenge for the geopolitical losses and the brutal capitalist “shock therapy” of the 1990s.

The Ukrainians chose Volodymyr Zelensky as their president. They are in favour of closer ties with the EU and the west. Russia might feel threatened by Nato’s expansion, but those countries that joined did so precisely because they were afraid of Russia. This invasion, if anything, vindicates their fears. So the call to fight back is understandable – and tempting.

But there are other – nonviolent – ways of resisting. Some Ukrainians have stopped Russian tanks by blocking them. People have confronted troops with boos, chants and verbal tirades. The Ukrainian road company has encouraged people to remove road signs to confuse the invaders.

Ukraine is offering money and amnesty to anyone who deserts from the Russian army. Zelensky addressed the Russian people in their language telling them to resist as well.

In Russia, thousands have demonstrated in the streets despite considerable personal risks. Numerous public figures, hundreds of Russian scientists, even over 150 clerics, have expressed opposition to the war already. There are reports of small gestures of resistance like this woman wearing the colours of the Ukrainian flag in the Moscow metro.

Further away, the activist group Anonymous has been waging cyber-attacks against Russia. Major international corporations and sports organisations are cutting ties with Russia. The toughening economic sanctions imposed by multiple governments will put further pressure on Putin and the Russian elite (although they will cause considerable suffering to the Russian population).

Nonviolent resistance on the horizon?

So, plenty of responses to Putin’s invasion have been nonviolent, some very creatively so. There are more options. In his 1973 study, The Politics of Nonviolent Action, the American political scientist Gene Sharp listed 198 potential methods of nonviolent action, which some have since updated to include possibilities opened by the internet.

Even as individuals away from the conflict, we make choices every day that can join in the effort. Either way, responses that do not opt for violence are still responses, just ones involving no physical violence – and sometimes, for Russians and especially for Ukrainians, at very considerable personal risks.

By contrast, Russian soldiers might be emboldened by violent responses. Putin’s regime will spin what it can to its advantages. Fighting violently against a power like Russia also poses considerable risks, including in strengthening Russian resolve.

Nonviolent resistance, and especially nonviolent resistance where the resister nonetheless still risks suffering violence, instead spreads hesitation and doubt in the invading force. It keeps delegitimising the actions of regime backers. It might make them start reconsidering their allegiances.

It is of course easy to say all this from a comfortable shelter away from the conflict. I do not mean to lecture people on the ground. It is up to Ukrainians, currently living the horrors of this war, to decide how to best defend their communities and their country against military invasion. The anger at the invasion is justifiable, the urge to resist too, and the temptation to do so violently understandable.

Tolstoy’s condemnation of violence was not popular back then, whether among those who wanted to topple the tsar or those who were fighting for national liberation elsewhere. But with the experience and lessons about nonviolence accumulated since then now behind us, some people in Ukraine, but also in Russia and elsewhere, have been resisting nonviolently even in the face of superpower invasion. Their strategy might be worth taking seriously and might generate more creative tactics yet – and these may prove at least as effective as violent resistance.