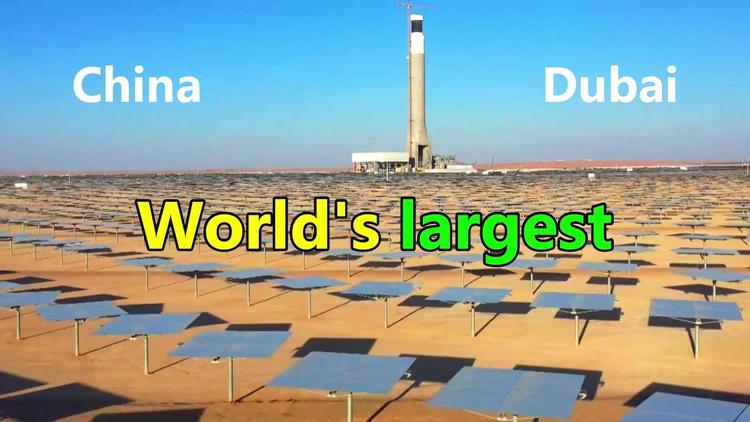 Ann Arbor (Informed Comment) – Even the energy minister of the United Arab Emirates, the world’s eighth largest oil producer, has admitted that the steps so far taken in the small Gulf country toward green energy have saved it $191 billion. The UAE gets about 7% of its electricity from solar panels, saving on the import of natural gas. Energy Minister Suhail Al Mazroui said that the Emirates government is so taken with these savings that it intends to accelerate solar projects.

Emirati companies such as Masdar and Dewa are also spearheading 40 wind and solar projects internationally.

Inside the small country of a million citizens and 8 million guest workers, Dewa (The Dubai Electricity and Water Authority) is a major force in the energy market. It has contracted with China to construct the world’s largest single-site solar farm in the world, which by 2030 is slated to be producing 5 gigawatts. A gigawatt is the capacity of a small nuclear power plant. The solar park is named for Dubai ruler Mohammed bin Rashid Al Maktoum, who serves as the vice president and prime minister of the United Arab Emirates.

The 7% of the UAE’s electricity that comes from solar is thus slated to become a much larger figure.

The government announced last year that it wanted to have 50 gigawatts of electricity production capacity in 2024, and wanted 11 of those gigawatts, or 22%, to be green energy.

You’d think talking green energy in Abu Dhabi and Dubai would be like pushing renewables at the Republican National Convention. But in fact, the country’s leadership recognizes a superb deal when it sees one. I’m speculating here, but I think they also realize that the less petroleum and methane gas they use domestically, the more they have to export.

Likewise, until they can develop their own newly-discovered gas fields off the coast of the capital, Abu Dhabi, they are dependent on Qatari gas, and the relationship of the UAE and Qatar is awkward after the UAE tried to overthrow the Qatar government in 2017 and slapped a potentially crippling boycott on its neighbor until early 2021.

Finally, the UAE is a consortium of seven sheikhdoms. Abu Dhabi is the one with the petroleum and, potentially, methane gas. Dubai, which is pushing solar energy hard, is poor in natural resources but has tourism, business and high finance. The greener Dubai’s grid is, and the more money it saves on energy, the more independent it is from Abu Dhabi. So green energy could be part of intra-state rivalry.

Not only that but the country’s central government can see the writing on the wall. There is a lot of bad PR in continuing openly to push fossil fuels, given the destructiveness of the climate emergency. Tourism is an important part of the economy and Dubai is a major finance hub, and both industries could be hurt by an image of promoting dirty energy.

Touting the UAE solar farms is a form of greenwashing, taking the focus off the 2,951,000 barrels a day of petroleum the country produces. Likewise, the country has recently announced a goal to get to 100% zero carbon by 2050. This new aspiration replaces an older plan that had still planned to get 40 percent of its power from methane gas in 2050.

It is a little misleading, though, to plan for a 100% green UAE at home while continuing to produce so much petroleum for the world market. It is like Australia’s domestic move to solar, even though Canberra is a major exporter of coal.

Still, the UAE rulers are in the energy business, and they have a huge vested interest in fossil fuels. They nevertheless are making a big push for renewables, because they know green energy will save them hundreds of billions of dollars.

Alas, most of our Republican representatives and senators are not as rational on this issue as the UAE ruling sheikhs.