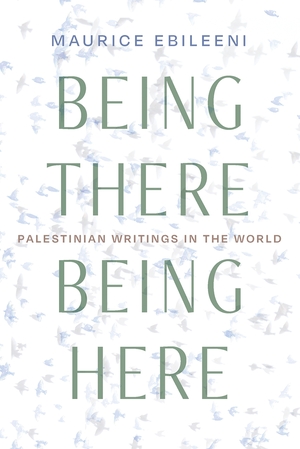 ( Middle East Monitor ) – Maurice Ebileeni’s study of Palestinian literary narratives and the imaginings of the Palestinian homeland highlights the need to rethink both. Being There, Being Here: Palestinian Writings in the World takes the reader on a multifaceted journey through land, continents and languages as these intertwine with Palestinian authors’ perceptions, imaginings and affinities to Palestine. Exile – a common experience of Palestinians – has played a major role in shaping diverse narratives that play out in literature, indicating a wide spectrum of how home is perceived, related to, expressed and narrated, in contrast to the Palestinian national narrative that is mainly built upon the legitimate right of return.

Maurice Ebileeni, Being There, Being Here
Palestinian Writings in the World. [Click here]

Ebileeni writes that Palestinian literature “is grounded in the idea of imagining a Palestinian homeland from a variety of positions that are not primarily dependent upon the artists’ notion of birth or birthplace.” The 1948 Nakba in particular, and the consequent displacement of Palestinians, resulted in a sense of belonging that is primarily attached to the memories of the previous generations. In terms of Palestine as home, the literature reviewed by the author produces a multitude of complex questions. Displacement, the author notes, is also reference to “the irreversible transformation of a certain area, rendering it alien to its native population.”

Palestinian literature in languages other than Arabic, which started flourishing in the 1980s, still contributes to the Palestinian national narrative. The book draws upon Palestinian writing in English, Danish, Hebrew, Spanish and Italian, emphasising not only the widespread Palestinian diaspora, but also the writers’ own experiences of living in their host countries, away from a home that is borrowed from memory.

Particularly for Palestinians who were born in Western countries, Palestinian literature spans a vast itinerary of displacement and sits at the crossroads between generations of remembrance and a Palestinian national narrative which is steeped in history yet, in many ways, is exclusive of experiences that are not necessarily conforming. Palestinian memory is political, and literature most not be perceived as a separate entity. Furthermore, the cultural significance of polylingual Palestinian writings must not be dismissed.

Drawing upon various texts, including those by Ghassan Kanfani, Susan Abulhawa, Fawaz Turki, Susan Muaddi Darraj and Lina Meruane, Ebileeni notes that, “The Palestinian novel is not merely an artistic extension of the national narrative.” Through detailed analysis of literary texts, the author brings the experiences of Palestinian displacement to the helm, noting that the diverse experiences of exile are imparted through a variety of narrations and relation to belonging.

While the anti-colonial resistance, or armed struggle, remains part of the national narrative, polylingual Palestinian authors embrace other forms of association with Palestine. Abulhawa, for example, explores the concept of undoing “a historical injustice” and exile as a temporary condition if reconnecting to Palestinian roots is possible. Meruane, on the other hand, presents Palestine through her writing as “part of a heritage that is both culturally and linguistically remote.” As a Palestinian born in Chile, Meruane maintains the desire of returning as an unfulfilled wish; “a return from someone else, made in someone else’s place.”

Ebileeni notes, “The ongoing fragmentation of Palestinian reality has yielded a culturally nuanced space composed of various localities transcending the diasporic vernaculars and expressing the de-territorialisation of a national centre.” With the Palestinian exile narratives, belonging or connection to Palestine are rooted in imaginings or concepts that emphasise distance, yet the return is also a political call, even if different diasporas hold their own image of Palestine and return depending upon their experience. The book also notes the distinction between national narratives and local narratives in Palestinian literature, the latter being more prominent.

The narrative on Palestine, therefore, is vast and within an ongoing evolution. As the author states, “We should acknowledge the emergence of several epistemic Palestines – similarly grounded in memories and narrations of the past – that are constantly coming into being, as Palestinians everywhere distinctively fathom the past and envision the future.”

By hypothesising a return to Palestine 100 years after the Nakba, Ebileeni poses a series of pertinent questions which may be raised, and which also encourage the reader to ponder literary texts as part of a bigger picture. Throughout the book, the author dispels the notion of “a unified people”. As the literature shows, recognising the spectrum of Palestinian experiences of exile and forced displacement is key to realising that holding on to the national narrative does not represent the Palestinian narratives prior to and after the Nakba. What the new Palestine may entail will ultimately arise from a diverse population, and one that that is aware of how exile has altered it.