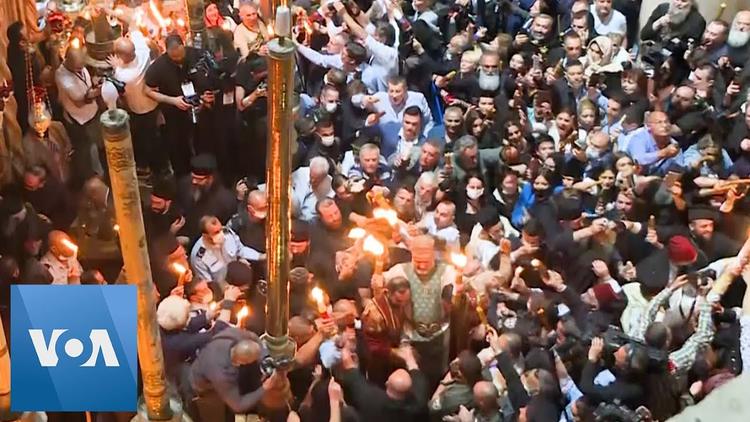 Ann Arbor (Informed Comment) – Palestine’s foreign ministry on Saturday called on the Biden administration to pressure Israel to cease its encroachments on the religious liberties of Palestinian Christians and Muslims in Jerusalem. The issue shifted this weekend to Israeli restrictions on Christian crowds flocking to the Church of the Holy Sepulcher for Eastern Orthodox Easter and for Saturday’s “Holy Fire” ceremony described by Joseph Kraus at AP.

The Eastern Orthodox church that predominates among Christians in Syria, Palestine, and in Greece, Russia and most of Ukraine, holds and annual ceremony at the Church of the Holy Sepulcher in which priests go into a chamber said to have been built directly over Christ’s tomb and light candles from a mysterious source of fire. They then return to the nave of the church and light congregants’ candles from their own. Some of the lit candles are flown to countries that are important centers of Eastern Orthodoxy. For the past two years the ceremony could not be held because of the pandemic. In 2019, over 10,000 Christians flocked to the church and its environs.

This year the Israeli state placed severe restrictions on how many Christians could attend, and on Saturday they set up metal barriers to enforce those limits, of only 4,000 attendees. Israeli government officials said they were afraid of a stampede. The Eastern Orthodox authorities in Jerusalem dismissed this fear as a pretext, pointing out that the ceremony had been held annually without incident. Controlling the some 370,000 Palestinians of East Jerusalem has become an obsession of the Israeli security forces, as the state and Israeli civil society make a press to implant Jewish squatters on Palestinian property there and to exercise increased control over civic and religious life.

The complaints of Christians come after a week of Israeli attacks on Palestinian worshipers at the sacred al-Aqsa Mosque compound during the holy month of Ramadan. Christian Palestinians have been known to join in demanding that Israel keep its mitts off both al-Aqsa and the Church of the Holy Sepulcher.

Israel seized East Jerusalem in 1967 by military main force and is recognized as the Occupying power there. International law forbids occupiers to flood their own citizens into occupied territories or to annex them, but Israel has defied UN Security Council Resolutions to do both. The Geneva Convention of 1949 governing the treatment of occupied peoples was an attempt to forestall the atrocities committed by the Nazis in Europe from happening again.

The Israeli security forces set up barriers at the entrances to the Old City, according to Al Jazeera’s correspondent there, especially at Bab El-Jadid (New Gate) near to the Church of the Holy Sepulcher. Christian Palestinians from all over the Palestinian West Bank and from inside Israel, along with many foreign pilgrims, were kept away from the church by these obstacles.

Turkey’s Anadolu Agency reported that Israeli security forces slapped around some of the Christians who tried to push through the checkpoints, though there were no injuries, reporting from eyewitnesses, “there were several skirmishes between the police and the celebrants, at the checkpoints set up by the police in the city. They alleged that the Israeli police beat Christians who tried to reach the Church of the Holy Sepulcher, without causing any injuries.”

The Greek Church is also upset at the Israelis. Because of current Covid policies, a representative of the church would have had to arrive in Jerusalem on Good Friday in order to be allowed at the Church of the Holy Sepulchre on Saturday. But the priests were all committed to Good Friday services in Greece and could not get away. The church complained of Draconian Israeli restrictions. An Aegean Air flight did bring candles lit by the holy fire to Greece, after which they were distributed to 8 cities in the country.