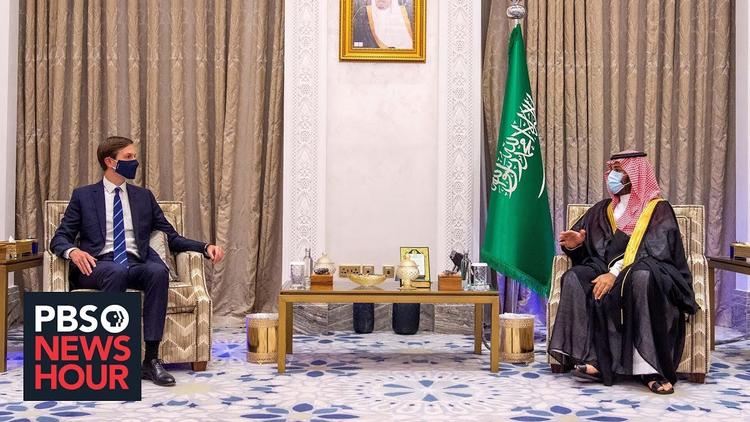 Ann Arbor (Informed Comment) – According to investigative journalist Vicki Ward, Jared Kushner, a minor New York hustler who managed to marry into the Donald Trump crime family, became the anti-Jon Snow in the Saudi game of thrones. That is, he enabled the worst possible ruler to come to power, and got a $2 billion paycheck for himself out of it. Although Informed Comment cannot independently verify Ward’s allegations, they are worth considering.

In the HBO series The Game of Thrones, the Jon Snow character prevents the rise to power of Daenerys Targaryen, one of seven contenders for power in the land, on the grounds that she is a sadistic psychopath.

Fabulously wealthy Saudi Arabia is the world’s swing petroleum producer, and its Public Investment Fund (sovereign wealth fund) alone is worth about $500 billion.

The kingdom is one of the world’s last absolute monarchies. Unlike in Western Europe, it does not practice primogeniture, or at least it never used to. The throne was not handed down from father to eldest son automatically. In Middle Eastern and Central Asian monarchies, the succession went to the ablest senior male in the family, sometimes after a battle royale. In the Ottoman empire, rival princes to the successful claimant were often blinded to prevent them from making a bid for the throne.

The founder of the “Third Saudi state” was `Abd al-Aziz Ibn Saud (d. 1953), most often just called Ibn Saud. He conquered Western Arabia, with the holy cities of Mecca and Medina in 1924-26, kicking out the local Hashemite rulers. (The latter were given Jordan and Iraq by the British.) Ibn Saud had 45 sons by several wives (he could have four at any one time), all of whom theoretically were eligible to succeed him.

In practice, some of his sons were more powerful than others. In particular, the seven boys borne to Ibn Saud by Hussa bint Ahmed Al Sudayri, his favorite wife, garnered a great deal of power starting in the 1980s. Fahd Bin Abdulaziz, the oldest of the seven brothers, held the throne 1982-2005. He was succeeded by a non-Sudayri, `Abdullah Bin Abdulaziz.

But Abdullah made a Sudayri, Sultan, the Crown Prince in 2005. Sultan Bin Abdulaziz died, however, in 2011, in Abdullah’s lifetime.

Another of the Sudayris, Nayef Bin `Abdulaziz, served as Interior Minister in 1975–2012. That is sort of like being head of Homeland Security. He then became Crown Prince as well, but died in 2012 before he could succeed to King Abdullah.

I’m telling you about Nayef for a reason.

In January, 2015, King Abdullah died. There were only three Sudayris from among Ibn Saud’s sons left. Two of them had fallen out with Abdullah and weren’t thought eligible to succeed.

Salman, the third, was eligible but rumors had long swirled that he has a bit of dementia or at least goes in and out. Some princes were reluctant to see him accede to the throne, but his backers managed to put him in.

King Salman appointed Mohammed, the son of Nayef, as his Crown Prince. This move marked a major changing of the generational guard, since he was the first potential monarch from among the grandchildren rather than the children of Ibn Saud.

In 2012 Mohammed Bin Nayef had become the Interior Minister (like his father), and he had long experience in intelligence and counter-terrorism. He played a role in defeating an al-Qaeda insurrection in the kingdom 2003-2006 and developed good sources in the Yemen-based al-Qaeda in the Arabian Peninsula (AQAP), helping foil the latter’s planned attacks on the United States. An AQAP agent managed to get close enough to Mohammed Bin Nayef to blow himself up and injure the prince in 2009; the injuries were so long term that he had to stay on pain medication.

So Bin Nayef was Washington DC’s very favorite Saudi prince, though the human rights community is critical of him.

When King Salman made Bin Nayef crown prince, he appointed his own son, Mohammed Bin Salman, as deputy crown prince. So both potential successors were grandchildren of Ibn Saud and of his favorite wife Hussa.

Mohammed Bin Salman (known as MBS) is not the sort of person who wanted to wait around decades to come to power. He is scarily ambitious.

In 2017, MBS convinced his father to set aside Bin Nayef (known as MBN) as crown prince, and elevate him, Bin Salman, instead.

This was a turning point in the history of the modern Saudi state, since it seemed to announce a principle of primogeniture, that the succession would be in a single line. The other princes were not happy.

But it appears that Bin Salman rose in part on the basis of his extreme popularity with the new generation of Saudi youth and young marrieds, many of whom had ascended in the ranks of the middle or upper middle class. They had their own aspirations for change, and the crown prince played to them.

Moreover, Bin Salman gained an unsavory reputation for brutality with his project of a war on Yemen and other actions.

In early March of 2020, Bin Nayef was arrested on charges of plotting a coup against King Salman and against MBS.

So that’s it. That’s the point at which, Ms. Ward’s Washington sources told her, Jared Kushner saw CIA intelligence on the coming coup and called up Mohammed Bin Salman and warned him.

The CIA never did give Kushner the kind of high-level security clearance that would allow him to see not only intelligence reports but also sources and methods. The agency clearly did not trust the first son-in-law not to out all the Saudi agents working with US intelligence in the kingdom to Bin Salman.

On October 2, 2018, dissident Saudi journalist Jamal Khashoggi was murdered in the Saudi consulate in Istanbul at the hands of MBS’s security team. The CIA, at least, fingered the crown prince as having ordered the hit.

Kushner and Trump sidelined the story in the elite press.

After Kushner returned to private life, Bin Salman arranged for him to get a $2 billion investment in his investment fund last summer, even though the oversight board of the Saudi Public Investment Fund ruled against it on the grounds that Kushner had no experience as a money manager.

I still think MBS was buying future influence and not just paying off an old debt. But if Ward is right, it was a hell of an old debt.