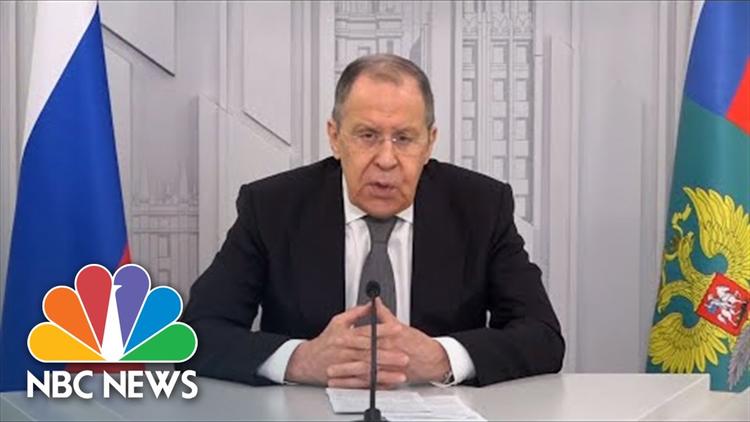 Ann Arbor (Informed Comment) – The Israeli and Ukrainian governments have lambasted the Russian Federation for remarks of Foreign Minister Sergei Lavrov in a video interview with an Italian TV station. Lavrov defended Moscow’s creepy allegation that the Ukrainian government is dominated by Nazis, even though the president, Volodomyr Zelensky, is Jewish. Lavrov said that to his recollection, Adolf Hitler was part Jewish, and he alleged that some of the worst antisemites are Jewish.

It is notable, however, that even in speaking out against Lavrov’s lie, the Israeli authorities managed only to condemn its antisemitic implications, but not to defend Volodomyr Zelensky or Ukrainian sovereignty. Hitler’s murder of 6 million Jews was an epochal evil, but he did also go around aggressively invading other countries, including Ukraine (then an SSR of the Soviet Union), The war he kicked off by invading Poland in 1939 is estimated to have left 28 million Europeans dead on the battlefield, quite apart from Nazi institutional killings of millions of civilians, including the 6 million Jews. It doesn’t seem to me that we can actually hope for “never again” unless we work against and condemn aggressive warfare as well as genocide.

Lavrov said of Zelensky, “He puts forward an argument, ‘What kind of nazification can we have if I’m a Jew?’ If I remember right — I may be wrong — but Hitler also had Jewish origins. And it absolutely does not mean anything. For some time we have heard from the wise Jewish people that the biggest antisemites were Jewish.”

Thomas Weber, writing at the Oxford University Press blog, fact-checked the rumor that Hitler had some Jewish ancestry, and says it is unfounded. Ironically, the allegation appears to have been put around by his political rivals who were trying to forestall his rise to power.

PM Bennett said on Twitter, “I view with utmost severity the Russian Foreign Minister’s statement. His words are untrue and their intentions are wrong.” He added, “The goal of such lies is to accuse the Jews themselves of the most awful crimes in history, which were perpetrated against them, and thereby absolve Israel’s enemies of responsibility.” He asked that people stop playing politics with the Holocaust [sic].

Foreign Minister Yair Lapid had told an Israeli news site, “This is an unforgivable and scandalous comment, a terrible historical error and we expect an apology. Hitler was not of Jewish origin and the Jews did not murder themselves in the Holocaust. The lowest form of racism against Jews is blaming the Jews themselves for antisemitism.”

The Russian elite’s weird and ridiculous meme that the Ukrainian government is dominated by Nazis should have drawn a rebuke from the Israeli government right from the beginning. Instead, Prime Minister Naftali Bennett let the calumny slide, seeking a way to remain neutral between Russia and Ukraine. The Israeli government has also avoided any full-throated denunciation of Russian President Vladimir Putin’s invasion of Ukraine, or of Russian atrocities in Ukraine, as at Bucha. This pusillanimous stance is shameful for a country with a large population of descendants of Holocaust survivors. Perhaps it is that Bennett is in the ideological line of the Israeli far right, which is about narrow Jewish supremacy and not about universal human rights. Perhaps, too, coming out too vocally against countries occupying other people’s territories cut too close to Bennett’s pet project for the Palestinian West Bank.

Russia dominates Syria and is allied with Iran, which could create a dire political situation for Israel if Moscow did not have a side agreement with Tel Aviv to allow Israeli fighter jets to strike threatening Iranian and Hezbollah convoys and facilities in Syria.

Israel also has economic reasons for keeping silent. It exports a billion dollars a year worth of goods to Russia. It imports $2.5 billion a year worth of goods, including half of its wheat imports, and diamonds, important to Israel’s own finished- and miniature-diamond sectors.