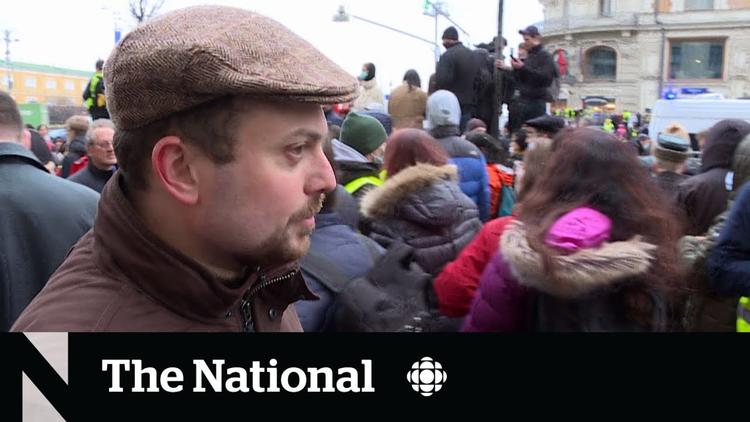 ( Waging Nonviolence) – Putin’s greatest vulnerability may be his dependence on the willingness of Russian soldiers to do his dirty work. Although many in Russia have been conditioned to accept Kremlin propaganda, others have doubts about the war, including some of the troops who have been sent to fight and the young men now facing conscription and possible deployment to the front. A strategy of encouraging noncooperation and defection among Russian troops deserves consideration as a means of undermining the war.

To undermine the war in Ukraine, U.S. antiwar veterans back a strategy of offering sanctuary and legal advice to defecting Russian troops.

Recently I joined with other former U.S. soldiers who opposed the Vietnam and Iraq Wars to issue an open letter urging Russian soldiers to “listen to your conscience.” The invasion of Ukraine is a violation of international law, our letter says, citing the International Court of Justice ruling against Russia. No soldier should be required to follow such orders.

The letter has been released to the press and through social media. The signers are also urging the United States and European governments to grant asylum to Russian soldiers and military officials who refuse to serve in the war.

The Russian army units sent to attack Kiev and other cities have experienced significant morale and disciplinary problems. Some of the forces apparently committed atrocities and are responsible for war crimes, but there have also been reports of dissension, desertion and refusal to fight among some units, including in the elite Russian National Guard. According to the chief of Britain’s signals intelligence and security agency, Russian troops have refused to carry out orders, sabotaged their own equipment and even accidentally shot down one of their own aircraft.

Given draconian censorship in Russia and the pervasive information campaigns emanating from both sides in the war, it’s impossible to verify claims about military defection. What’s undeniable, though, is that Russia’s vaunted army performed poorly in the first phase of its attempt to subjugate Ukraine, and it’s likely that low morale and discontent in the ranks have contributed to that result.

Putin’s security forces have clamped down harshly on all forms of dissent, but family members of Russian troops killed during the war have spoken up on social media to express their anguish at the loss of loved ones and to ask when the war will end.

Russia is one of the few remaining European countries with conscription, and the annual wave of draft calls started recently. Lawyers in Russia report increased inquiries and requests for information about possible exemptions. Many potential recruits are worried about being sent to Ukraine. This concern prompted Russia’s Minister of Defense Sergei Shoigu to pledge that draftees would not be sent to the front lines or “hot spots.”

Many Russians are skeptical of such assurances. Even before the invasion, human rights groups were receiving complaints of conscripts being pressured to sign contracts for professional military service that would make them susceptible to combat duty in Ukraine. An American data analytics company that tracks internet messaging and online forums in Russia recently reported growing anxiety among Russians about the draft and military casualties. Conscripts were apparently among the missing crew members who died in the sinking of the Russian flagship, Moskva.

During the Vietnam War, many of us who served in the U.S. military resisted and dissented against the war. We signed petitions and published underground newspapers. Many deserted or refused to participate in combat. Some sabotaged their equipment. During the Iraq War, soldiers wrote antiwar blogs and sent appeals to Congress, and they convened public hearings on the atrocities of war. Military family members demanded the return of their loved ones.

As Erica Chenoweth and Maria Stephan have documented, defections and loyalty shifts are crucial to the success of civil resistance, especially when they occur among government officials and members of the security forces. When soldiers and officers refuse to participate in unjust wars or the repression of civilians, the power of illegitimate authority erodes. This is the Gandhian theory of political power, which holds that power is based on consent. When soldiers withhold their consent and no longer follow orders, power begins to shift.

Russia itself experienced this in August 1991 when four hardline Soviet generals attempted a military coup against the government of Mikhail Gorbachev. As the rebellious generals rolled tanks onto Moscow’s streets, Russian president Boris Yeltsin famously climbed atop one of the armored vehicles and urged troops to refuse illegal orders. In a radio broadcast he told soldiers and officers, “Your weapons cannot be turned against the people.” Thousands of Muscovites rushed to the center of the city and formed a human chain to protect Russia’s seat of government. The troops refused to shoot their own people, and the coup quickly collapsed.

Loyalty shifts among soldiers were also an important factor during the Velvet Revolution that brought freedom to Eastern Europe in the 1980s. In East Germany nonviolent resistance to the communist government began with prayer services and unauthorized vigils in Leipzig and other cities. The turning point came on Oct. 9, 1989, when tens of thousands of people solemnly gathered at St. Nicholas Church in Leipzig for a candlelight procession. Alarmed by the size of the crowd, communist authorities sent East German troops to suppress the movement. Many feared that a bloodbath would ensue, but the protesters maintained a disciplined, prayerful demeanor and at the last minute the soldiers withdrew. Military commanders chose not to shoot their own people. This opened the floodgates of mass protest in the country and the communist regime crumbled.

Military resistance during Vietnam played an important role in ending the war. Many of us who served were part of the resistance — sometimes protesting openly (as I did), often by deserting and refusing orders or through obstruction and intentional inefficiency. Resistance in the ranks eroded military effectiveness and undermined operational capacity.

The GI movement during the Vietnam era received significant support and encouragement from civilian antiwar activists. Coffeehouses and military counseling centers were set up near major military bases in the U.S., Germany and Asia. These centers were an indispensable support base for low-ranking service members seeking an escape from the military who were in need of sanctuary and legal assistance.

A similar kind of support network now in Eastern Europe could be a factor in facilitating exit for Russian soldiers seeking a way out. Conscripts and soldiers who want to avoid the war will need personal support and legal assistance in neighboring countries. The U.S. and European states could encourage that process by granting asylum for those who defect.

Under international law and European Union directives, those who face punishment for refusing to participate in illegal acts such as Putin’s war qualify for legal status as refugees. As law professor Tom Dannenbaum writes, when troops refuse to participate in an illegal war, “they take significant personal risk [and] states have a collective duty to protect them in that endeavor.”

The president of the EU Council, Charles Michel, tweeted his support for the asylum idea in early April. “Granting asylum to these soldiers is a valuable idea that should be pursued,” he said. “If you want no part in killing your Ukrainian brothers and sisters … drop your arms, leave the battlefield.” By supporting and encouraging antiwar resistance among Russian soldiers and conscripts, the U.S. and European governments could take a significant step toward undermining Putin’s war.

European civil society groups can jump start the process by preparing now to set up a network of counseling and support offices in frontline states. Working through church and university networks, they could begin to offer sanctuary and legal and other support services for Russian soldiers seeking to escape the war. Encouraging and supporting soldiers who refuse to participate in unjust missions has been an effective strategy against militarism in the past. It deserves greater attention now as a potential means of countering Russia’s military aggression against Ukraine.

David Cortright is a former GI during the Vietnam War who organized antiwar protests and filed a law suit against the Army for its suppression of the right to dissent against the war. He is professor emeritus at the Kroc Institute for International Peace Studies at the University of Notre Dame.