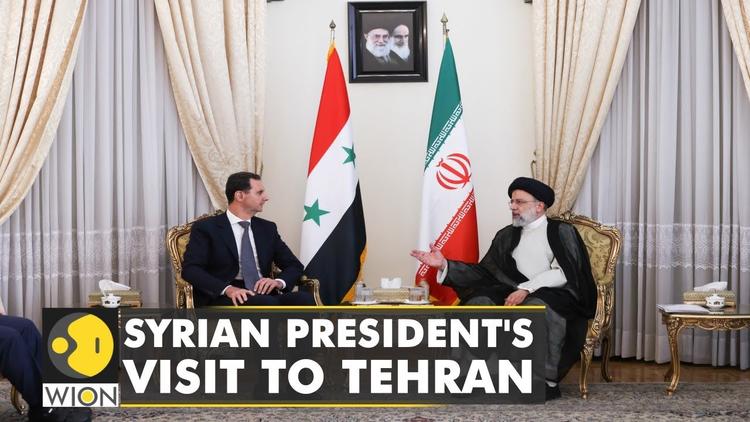 ( Middle East Monitor ) – The President of the Syrian regime, Bashar Al-Assad, paid a surprise visit to Tehran last Sunday and, adding to its surprising nature, is the fact that he had rarely dared to leave his country since the popular uprising against his regime began in 2011. His first visit outside Syria, since then, was to Moscow in October 2015, a month after the start of Russia’s military intervention in the Syrian war. Then the Syrian President’s visits to Russia were repeated, during which he met his Russian counterpart, Vladimir Putin, in Sochi (2017 and 2018) and, again, in Moscow last September to mark the end of the sixth year of Russia’s armed forces participating in the destruction of Syria and killing its people.

As for Tehran, Bashar Al-Assad visited it only once before his last visit, and that was in February 2019. It is likely that the visit was a pleasantry, after three visits to Russia without any visit to Iran until then, although Iran was the first to intervene in Syria to save the Assad regime by intensifying the intervention of its forces (Iranian and Afghan forces) and the forces of its Lebanese and Iraqi allies, starting in 2013. However, the recent visit has another meaning that is far from symbolic and closer to strategic concern.

This is because a major development has taken place since the Syrian President visited Moscow last fall. At the time, Russia was at the height of its power. Putin was threatening Ukraine while Russian forces are concentrated on the outskirts of this country, and he was indifferent to the warnings of Western forces, whether they are Washington’s warnings or the friendlier warnings of Berlin and Paris. Observers believed this to be symptomatic of a state of “paranoia”.

Today, however, it became clear that Putin’s calculations were completely wrong. The goals he announced at the beginning of his forces’ invasion of Ukraine, when he was promising regime change in Kyiv, similar to America’s regime change in Baghdad in 2003, which called for an occupation of the Ukrainian capital, suffered a setback. This is what the Russian forces tried to achieve at the beginning of the invasion, but they failed in the face of the intensity of the Ukrainian resistance, which surprised the whole world.

Although Russia announced changing the direction of its invasion, confining it to the occupation of eastern Ukraine, it has been unable to achieve that limited goal after two and a half months of fighting, and is still striving to expand its areas of occupation very slowly and with great difficulty. Perhaps, the most striking expression of the Russian failure was Putin’s dull speech on Monday to mark the annual celebration of the victory over Nazism in 1945 (a Soviet victory that Ukrainians participated heavily in, and celebrated the same victory on Sunday).

Instead of declaring victory on what is known as Victory Day, Putin made do with a very short speech, in which he explained that Russia was forced to invade Ukraine in self-defence and to avoid its neighbour’s armament with nuclear weapons and attacking Russia. This was how George W. Bush and his partners explained occupying Iraq, claiming it was in self-defence and in order to prevent it from developing its arsenal of weapons of mass destruction. They claimed it intended to use these against America. It seems that the world imperialist powers have a limited imagination, so they regurgitate the same excuses.

In fact, the Russian failure is a source of great concern for the Syrian regime, especially since Russia is withdrawing some of its units from Syria to the battlefield in eastern Ukraine and has even started using Syrian fighters in its invasion of that country. With the impact of the economic sanctions on Russia coming into full effect in the coming months, and the exacerbation of the difficulties the Russian forces are facing in the face of the valiant Ukrainian resistance, counting on Russia has become fraught with dangers. This is likely what prompted Bashar Al-Assad to visit Tehran, and has increased Iran’s weight greatly in the balance of protecting the Syrian regime as much as Russia’s weight has decreased.

In this sense, the Russian failure in Ukraine only strengthens Iran’s position, contrary to what might be thought at first glance, and weakens the rest of the reactionary regional alliance which includes the reactionary Arab regimes, especially the normalisation pioneer, Abu Dhabi, alongside Israel and in cooperation with Moscow. From this perspective, the purpose of the Syrian President’s visit to Tehran has become clear, along with his announcement that “In the years of resistance and confrontation with Western and Takfiri aggressions, Iran was the only country that stood by us from the beginning,” as quoted by Tehran Times. This comes off as ingratitude towards Russia, which has been the main supporter of the Syrian military regime for decades. Al-Assad was also describing relations between Iran, his regime, and the Palestinian forces in the “axis of resistance” as “strategic,” noting that “the success of the Palestinian resistance has shown that compromise by some Arab states has backfired.” What sort of compromise is he referring to, as the “normalisation” regimes, which are the closest to his regime, are not only compromising with Israel, but openly colluding with it?

Gilbert Achcar is Professor of Development Studies and International Relations at the School of Oriental and African Studies. His many books, published in a total of 15 languages, include: The Clash of Barbarisms: The Making of the New World Disorder (2002, 2006); Perilous Power: The Middle East and U.S. Foreign Policy, co-authored with Noam Chomsky (2007, 2008); The Arabs and the Holocaust: The Arab-Israeli War of Narratives (2010); Marxism, Orientalism, Cosmopolitanism (2013); The People Want: A Radical Exploration of the Arab Uprising (2013); and Morbid Symptoms: Relapse in the Arab Uprising (2016).