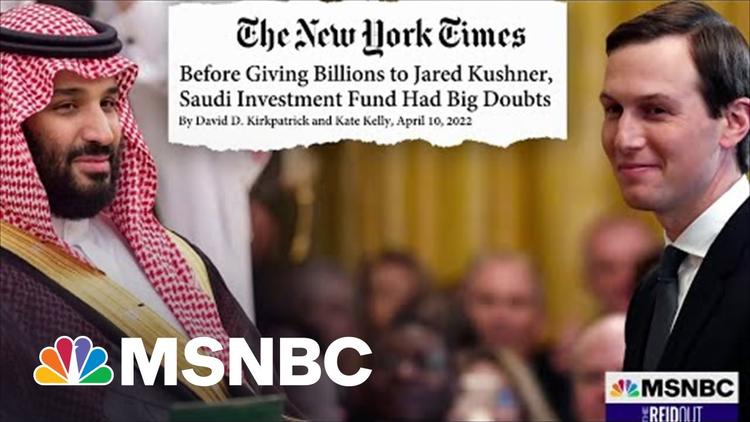 Ann Arbor (Informed Comment) – Dion Nissenbaum and Rory Jones at the Wall Street Journal got the scoop that Affinity, Jared Kushner’s investment firm, will invest some of the $2 billion it got from Saudi Arabia’s sovereign wealth fund in Israel.

Kushner told the WSJ that he sees building investment and business ties between the Muslim world and Israel as an extension of the Abraham Accords that he spearheaded, which resulted in formal peace between Israel and Bahrain, the United Arab Emirates and Morocco. He had wanted the Saudis to join those accords, but it is said that King Salman Bin Abdelaziz, 86, put his foot down and refused. In a phone call in fall of 2020 with then President Donald Trump, King Salman stressed the “kingdom’s keenness to reach a lasting and fair solution to the Palestinian cause to bring peace,” signalling that normalization with Israel was dependent on that country implementing at long last the Oslo Accords it signed in 1993 to create Palestinian state. His son, the crown prince, Mohammed Bin Salman (MBS), was rumored to have been more willing.

King Salman remembers the 2003-2006 battle with al-Qaeda and the Wahhabi far, far Right in the Kingdom, and is aware that Muslim fundamentalists are very pro-Palestinian and deeply dislike Israel. He may also remember that Egyptian President Anwar El Sadat was assassinated by the Egyptian Islamic Jihad in 1981 for having signed a peace treaty with Israel. His son, MBS, is of a younger generation with perhaps less firm memories of such radicalization and perhaps with less principle or sense of caution than his elderly father. MBS is known for reckless moves like invading Yemen, kidnapping the prime minister of Lebanon, and imprisoning many of his cousins, shaking them down for billions of dollars in what he alleged were ill-gotten gains. Saudi Arabia is a closed society with an absolute monarchy and no free press, so it is not possible to know what the public opinion of MBS really is, though he is said to be wildly popular among the young.

In 2021, King Salman even stopped allowing all goods to come in duty free to Saudi Arabia from its close ally, the United Arab Emirates, for fear that some products made by Israeli squatters on the Palestinian West Bank might enter the kingdom that way, after the UAE established free trade with Israel. The Israeli attacks on worshipers at the sacred al-Aqsa Mosque compound, both in spring of 2021 and again this year, have embarrassed the signatories to the Abraham Accords, along with Egypt and Jordan, which have peace treaties with Israel. King Salman doesn’t need that sort of association.

The son, Bin Salman, is in bad odor in Washington, D.C., because the CIA fingered him as involved in the assassination in 2018 of the Saudi Washington Post columnist Jamal Khashoggi. President Joe Biden initially ran on making MBS, and his country, pariahs.

MBS needs a “get out of jail free” card, and has now been presented with two of them. The first is that the Biden Administration’s and the European Union’s attempts to boycott Russian petroleum require other big players like Saudi Arabia to increase production if oil prices are not going to skyrocket. There was already growing demand in the market coming off the reopening after the pandemic, and keeping millions of barrels a day of Russian oil in the ground would lead to historically high prices if other petro-states don’t step in.

Biden has asked King Salman (he won’t talk to MBS) to up production, but the request has been refused. Some think MBS is holding out for some sort of administration pardon or pledge to stop bringing Khashoggi up.

The other boon that MBS has been granted is the Kushner investment opportunity. It may not be a wise move for the Kingdom, but it is excellent for the crown prince. By indirectly investing in Israel through Kushner, Mohammed Bin Salman may have a hope of getting the K Street Israel lobbies like AIPAC on his side, who may then pressure Biden to set aside the Khashoggi murder. Since the move is indirect, MBS can also sidestep King Salman’s reluctance to get too close to Israel.

MBS’s search for redemption is not quixotic. His investments in Turkiye have led Ankara to drop the case against him on charges of complicity in Khashoggi’s murder.

About a month ago, the New York Times reported that the board of directors of the Saudi Public Investment Firm had balked at putting $2 billion into Affinity on the grounds that Kushner had no track record in investing large sums successfully. The NYT said that Mohammed Bin Salman personally overruled them to allow the deal to go forward.

Journalist Vicki Ward alleges that when he was in the White House, Kushner got wind of CIA reports of a possible coup against Mohammed Bin Salman by his cousin Mohammad Bin Nayef, the former Interior Minister. The CIA, she alleges, was all for the coup, but Kushner called up MBS and warned him. As a result, US intelligence never did give Kushner a high security clearance, since they were afraid that he would out all US assets in Saudi Arabia to the crown prince.