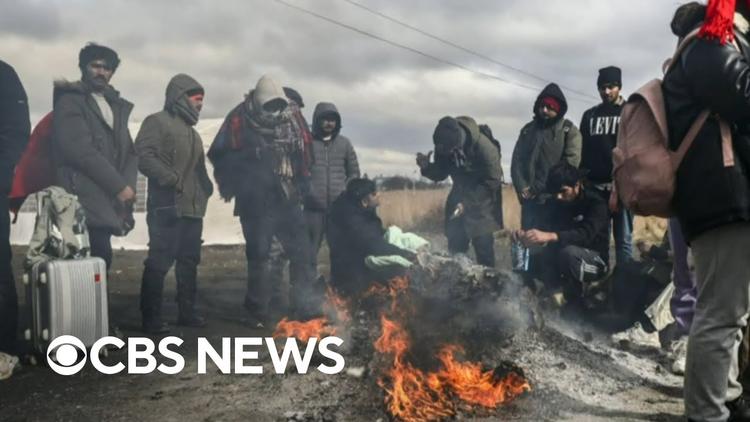 Human Rights Watch – (Berlin) – Migrants and asylum seekers locked up in a migrant detention center in Mykolaiv on the edge of the front lines in southern Ukraine are in danger and should be released, Human Rights Watch said today. Ukraine should urgently release the dozens of migrants and asylum seekers arbitrarily detained in this and another detention center and allow them to reach safety in neighboring countries.

“Migrants and asylum seekers have been locked up for nearly two months on the edge of a war zone,” said Nadia Hardman, refugee and migrant rights researcher at Human Rights Watch. “Detainees are terrified and in danger, and there is no justification for keeping them in immigration detention.”

In mid-April 2022, Human Rights Watch interviewed two men by telephone who are being held in the Temporary Holding Center for Foreigners and Stateless People in Mykolaiv region, close to frontline hostilities. On April 4, Human Rights Watch had released a report based on interviews with migrants and asylum seekers detained in the Zhuravychi Migrant Accommodation Center in Volyn’ oblast, a former military barracks one hour from Lutsk, a city in northwestern Ukraine. Migrants and asylum seekers also remain in detention at the Zhuravychi center.

Article continues after bonus IC video
CBS: “Poland helps Ukrainian refugees — but not all are welcome”

People interviewed in both centers said that they had been detained in the months prior to the Russian invasion for irregularly trying to cross the border into Poland or for visa irregularities. Whatever the original basis for detaining them, their continued detention is arbitrary and places them at risk of harm from military hostilities, Human Rights Watch said. If they were being detained administratively for the purpose of removal, since Ukraine is not able to deport anyone at this time because of the conflict, the reason for their detention evaporates, and further detention becomes arbitrary.

Human Rights Watch wrote to the Ukrainian authorities on March 9 and April 20 about the situation of people still held in immigration detention and seeking the grounds for their detention but has not received a response.

In March, the Global Detention Project reported that a third detention center, the Chernihiv Temporary Holding Center, had been emptied of migrants and asylum seekers. In early May, Borys Kryvov, deputy director of the Chernihiv center, told Human Rights Watch that the facility had been hit by munitions he believes were fired by a drone on March 30, after people had been evacuated, shattering windows in the dining hall and dormitory and damaging the roof. While the damage was limited, it underscores the need to urgently evacuate people from Zhuravychi and Mykolaiv before these centers are also targeted in an attack.

Interviewees in both centers said guards told them they could leave the Zhuravychi or Mykolaiv facilities if they joined the Ukrainian war effort, and that the guards promised them they would be granted Ukrainian citizenship and documentation if they joined. The interviewees said that no one accepted the offer.

People in both facilities said that since the Russian invasion, they have felt terrified being locked up in a war zone. The Zhuravychi center is close to the Belarusian border and in March, people there said they heard explosions and artillery fire. The Mykolaiv facility is extremely close to the frontline and men we interviewed said they can hear and see military planes flying over the detention facility and the sounds of explosions and artillery at regular intervals. In a text message to Human Rights Watch on April 28, one man there said, “I lost hope … I think death is very close.” All men interviewed said they wished to leave as soon as possible and to seek refuge in neighboring countries with other civilians fleeing Ukraine.

Some people from both Zhuravychi and Mykolaiv have been released and evacuated to Poland with the aid and assistance of their embassies in neighboring countries. While the involvement of embassies of third country nationals might be needed at some point to assist with identity and travel documents, this should not be used as a reason to delay the urgent release of everyone currently held in both centers so that they can move to safety. Detainees from the Chernihiv migrant detention center in Chernihiv oblast were allowed to leave promptly after it became clear they were in danger. According to diplomatic sources, all released detainees formerly at Chernihiv have crossed the border out of Ukraine.

Two men at the Mykolaiv center have received letters from their embassies, that were also sent to Ukrainian officials, asking the Ukrainian authorities to urgently facilitate their release, but both remain in detention.

“Now that Ukraine has become a war zone, the EU should do all it can to facilitate the release and safe passage of people that Ukraine has detained based, in part, on agreements and financial support from the EU,” Hardman said. “At a time when the EU is welcoming Ukrainian refugees, the EU should throw a lifeline to migrants and asylum seekers still in danger in Ukraine.”