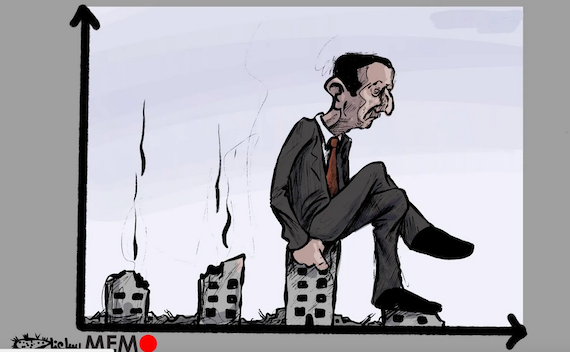 ( Middle East Monitor) – Pivotal moments in history rarely present themselves, but when they do, that is exactly what they turn out to be. The power dynamics of an entire region can be altered, the interests of governments can be shifted, and the geopolitical arena can be at least partially dominated by former underdogs.

That is the kind of opportunity history is presenting to the Syrian opposition groups, which have all but gone dormant in the face of almost a decade of Russian battering. Now, amid the ongoing Russian invasion of Ukraine which was launched over three months ago and has no end date in sight, the Syrian rebel groups finally have a chance to continue their struggle against the regime of Bashar al-Assad.

While the numbers are disputed, it is estimated that Moscow has so far lost over 30,000 troops in its invasion of Ukraine. Those losses are few in the hordes of hundreds of thousands that Russia has – as has often been the case in its history – sent against its foes. There are reports that the Kremlin has largely sent its conscripts to the frontline as cannon-fodder while keeping its best forces and tactics in reserve.

Whatever the truth of such reports, it is difficult to deny that Russian forces are being tied up in Ukraine, compelling it to withdraw military forces and mercenaries from its operations in Syria and Libya. Some reports put the numbers of withdrawals in the thousands, and others only in the hundreds. Regardless of the scale, a withdrawal has been taking place.

One of the main issues to be considered and contended when assessing the possibility of Syrian opposition forces launching a renewed offensive against the Assad regime is the division amongst the rebel groups. The Syrian revolution is far from the golden days it enjoyed ten years ago, when the Free Syrian Army (FSA) was growing in strength and numbers, and was garnering support from much of the international community.

Now, the revolutionary groups have split up into numerous factions and movements of their own – some Islamist, some nationalist and secularist, some backed by the US or Turkiye, and some ethnocentric such as the Kurdish militias. To add to that division, the world is no longer focused on or captivated by the conflict in Syria, and has largely left it behind with little international support for a renewed opposition offensive.

As it stands, the most capable and powerful factions which are able to launch an offensive against the Assad regime are the Islamist rebel groups in north-western Syria, of which the chief amongst them is Hay’at Tahrir al-Sham (HTS), a former al-Qaeda affiliate which has broken off links with the movement. Over the past few years, HTS has been dominating the province of Idlib and its power politics, serving as the armed forces with the ‘Salvation Government’ as a civilian front.

With years of sustained combat experience against Syrian regime forces in southern Idlib and the Jabal Zawiya mountain and surrounding areas, HTS has at least some capabilities to successfully launch attacks against regime positions. Its possession of long-range heavy weaponry also boosts those capabilities.

Despite its reported military prowess, however, HTS has been and continues to be busying itself with suppressing rival factions in north-west Syria, making many sceptical of whether it would even set its sights on taking on Syrian forces. The group and its leadership claim that such efforts are for the long-term goal of uniting the Syrian opposition in the region under one umbrella, yet its poor performance against the regime and its allies’ offensive in 2020 – which saw the opposition lose huge swathes of land and key towns to Assad – also puts into question either its ability to defend territory or its sincerity in making it a priority.

Assad or the Kurds?

The Syrian National Army (SNA), the FSA’s descendent which governs other parts of north-west and northern Syria and which is backed by Turkiye, also seems to have dropped any aims to relaunch any attacks against Assad regime positions. Instead, it is refocusing its efforts on preparing to join Turkiye in its own planned operation against the Kurdish militias in northern and north-east Syria.

That is largely due to the backing given to the SNA and other proxies by Ankara, but is also due to the fact that the Kurdish groups control areas directly surrounding SNA territories, making it in their own interests to support such an operation. The question the Turkish-backed Syrian opposition groups must grapple with, then, is whether the Kurds or Assad are the greater threat.

It seems increasingly likely that the Fath al-Mubeen (Clear Victory) operations room – meant to represent a united front of opposition groups ready for combat against the Syrian military – established predominantly by HTS and Ahrar al-Sham, an affiliation of the SNA, will not become operational any time soon.

There is still, of course, the Turkish and Russian-brokered ceasefire agreement struck in March 2020 which officially obstructs an offensive by Assad’s forces and Russia against the Syrian rebel groups, and vice versa. Anyone with any awareness of the situation in north-west Syria practically since the agreement was struck, however, knows that it has been violated countless times – primarily by the regime and Moscow – and exists in name only.

The idea of utilising the opportunity brought by the Russian tie-down in Ukraine has, in fact, not been entirely neglected by some segments of the Syrian opposition. In the March edition of the monthly Balagh magazine – written and published in north-west Syria by anti-HTS figures and clerics – it acknowledged that the “Russian enemy is stuck in a tough [war of] attrition which has led it to withdraw its soldiers from many places and deploy them to the Ukrainian campaign, and it has transferred from Syria to Ukraine its best officers who have gained battle experience in Syria.”

The editorial lamented that “despite the extensive attrition and the embarrassment of the Russians, the situation [i.e. the rebel leadership] in Syria…behaves like a pot plant. The functionary leaders who were forced into the revolution are satisfied with the role of spectator and make do with a variety of exclamations.”

It accused those leaders from HTS and the SNA of having taken “control of the resources of the Syrian revolution”, and called them “nothing but slaves who function in accordance with the dictates of their masters and not in the interests of the jihad and the revolution.”

The editorial further condemned the leadership for inter-factional fighting and oppressive policies over the people they govern instead of taking advantage of the war in Ukraine. It “makes itself hated by the community of fighters; imposes a siege on the poor people in the region; conducts a complete census of the people in the area, collects information about them, their pasts and their activities and all these details stream smoothly into all the security apparatuses”.

If Syrian rebel groups were eventually to form an offensive against the Assad regime while Russia is distracted in Ukraine, there would still be considerable risks to reckon with. Firstly, Moscow still has a military presence – albeit probably limited – and some of its fighter jets are still stationed at the Khmeimim air base near Latakia.

There is also the presence of Iranian forces and militias to contend with, which many analysts predict could result in Iran’s ascendency in Syria amid the Russian withdrawal. Furthermore, there are no guarantees that Turkiye will back or adequately defend the Syrian opposition if they conduct their own operation against regime positions as happened two years ago – and even that was mainly due to Syrian forces killing Turkish troops.

Such realities will ensure that any rebel offensive in Syria would still encounter significant obstructions, but currently the Russians – by far the greatest factor which set the opposition back over the years – are tied down elsewhere, providing the “revolution” with a rare opportunity.