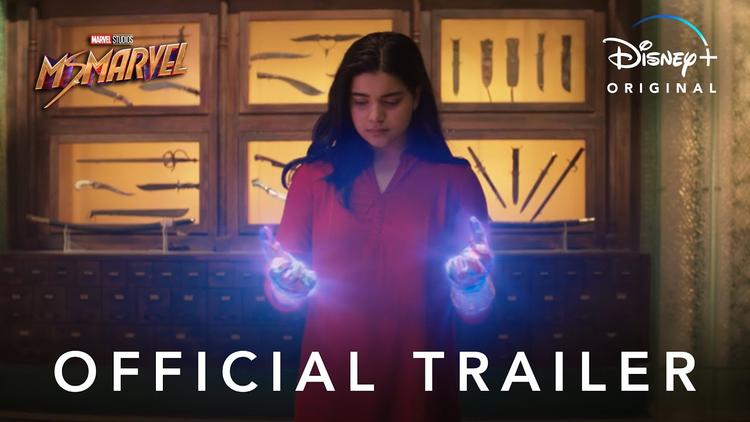 Ann Arbor (Informed Comment) – The Marvel Cinematic Universe streaming superhero television show, Ms. Marvel dropped on Disney+ this week, and it is a revolution in the representation of Muslim Americans on television.

The story revolves around a Pakistani-American 16-year-old girl from Jersey City who resents her strict and protective parents and wants to attend a comic book convention in *gasp* the evening and to wear a Captain Marvel uniform as cosplay. The hero, Kamala Khan, is played engagingly by Iman Vellani, a young Pakistani-Canadian actress. Ultimately, she sneaks off to the convention with a boy-who-is-a-friend (not a boyfriend) Bruno Carelli, played by Matt Linz (who played Henry in AMC’s The Walking Dead). Her grandmother had left a bracelet, and Kamala adds it to her Captain Marvel ensemble in hopes of winning a contest for best costume at the convention. It turns out that the bracelet is sort of like Aladdin’s lamp, bestowing superpowers of extension on her. She uses those powers at the convention but inadvertently causes some mayhem. She returns home to find her mother in her room waiting for her, aware that she had sneaked out. She is grounded.

At one point in the first episode, when she despairs of being allowed to go to the convention, she says, “Anyway, it is not as if the brown girls are the ones who save the world.”

Obviously, the point of the series is to disprove this defeatist point of view.

The streaming show is based on the award-winning Ms. Marvel comic books and graphic novels, which were begun by Sana Amanat and G. Willow Wilson, both Muslims, with art by Adrian Alphona.

Sana Amanat is a Pakistani-American raised in Jersey City, so there is a lot of her in Kamala. She had a career in magazine publishing, and then was hired in 2009 by Marvel Comics in a quest to make the company more diverse. She is now Director of Content and Character Development at Marvel, and has worked on other characters, such as Hawkeye, as well.

G. Willow Wilson is a novelist who deploys techniques of magical realism, and was the author of the first few years’ worth of Ms. Marvel comics.

Kamala Khan as played by Vellani is a sympathetic character, and she could end up helping do for Muslim Americans what the sitcom Will and Grace did for gays.

Some Muslim American commenters have worried that the depiction of Kamala’s very pious older brother and her strict parents will solidify rather than dispel some stereotypes. Me, I remember immigrant sitcoms like the Danny Thomas show in the 1950s that had some similar tropes. When Uncle Tannous visited from Lebanon, he thought Thomas’s American wife was way too skinny and wouldn’t be up to pulling a plow. Or there was Jimmy Durante, the Italian-American comedian who made fun of his own people’s syntax with phrases like “Yes, we have no bananas.” From that point of view, Ms. Marvel’s cliches stand in a long line of New World/ Old World tropes.

Some conservative Muslims have objected that Kamala Khan does not cover her hair. But I lived in Pakistan, and was interested to note that veiling is much less common in South Asia than in the Arab world. (It wasn’t so common in Egypt up to about 1990, either). So this criticism may come from differences between Muslim American traditions.

The generally positive and human depiction of Muslims is in any case a big change. We have had entire series, like Fox’s “24,” premised on Islamophobia. Muslims became stock villains. Rami Malik (a Coptic Christian of Egyptian extraction) even got a lot of cred for refusing to have his Bond villain be a Muslim in No Time to Die. This refusal is only newsworthy because the Muslim villain had become the default.

It wasn’t just dramas. I can remember being outraged some years ago when I saw a CNN report on violence by a small group of Muslim extremists somewhere, and they ran stock footage of ordinary Muslims praying in a mosque to illustrate it.

The American public has not always had a poor image of Muslims. In the Cold War era, they were often considered allies against Godless Communism. The Eisenhower administration even gave aid to Saudi Arabia to expand rail lines to Mecca to encourage Muslims to go on pilgrimage.

The September 11 attacks were carried out by a terrorist group that included secular-minded individuals such as the Lebanese hijacker Ziad Jarrah, who had a live-in Turkish girlfriend and some of whose family members were secular Baathists. Other members were a weird sort of Muslim nationalist. Al-Qaeda has never been more than a fringe extremist group in the Muslim world, akin to the KKK in the United States, and certainly does not represent Islam. Nevertheless, many Americans went on to tag Muslims in general with extremism and violence in subsequent years, very unfairly.

As I discussed for Tomdispatch this winter, even US law enforcement has been so obsessed by the small and for the most part remarkably well-behaved Muslim American community that they didn’t bother to keep sufficient watch on white supremacist groups such as the Proud Boys, enabling the Capitol insurrection.

By South Asia I mean Pakistan, India, Bangladesh, Nepal and Sri Lanka. There are now roughly half a million Pakistani Americans in particular, which would make them about 13% of the Muslim American population. The majority are Sunni Muslims of the Hanafi rite, but Shiites form a significant minority (20% ?) among them. Their national language is Urdu, which is related to Hindi but with more Persian and Arabic vocabulary. Pakistan itself however, is ethnically diverse, having Punjabis, Pukhtuns, Baloch, Sindhis and Urdu-speaking immigrants from India known as Muhajirs.

Despite the four broad rubrics given above, Muslim Americans are extremely diverse, hailing from Senegal and Bangladesh, Egypt and India, Algeria and Malaysia. Many have been bewildered to be put by other Americans under the sign of al-Qaeda, since it comes from a narrow religious tradition and the hothouse atmosphere of Soviet-occupied Afghanistan, and is completely different from their own traditions. It is sort of as though the KKK carried out a terrorist action in China and then Chinese started being suspicious of Methodists and Roman Catholics.

Ironically, the virulent Islamophobia of the Trump administration appears to have caused Americans to rethink their views of the minority. A 2019 Pew Research Center poll found that 89% of Americans say they would welcome a Muslim as a neighbor. 79% say they would welcome a Muslim as a family member. I suppose that means they would be all right with their son or daughter marrying one. While you have to regret the bigotted 19%, these attitudes are a huge improvement on those held even a decade ago.

On the other hand, half of Americans have doubts about whether Islam is compatible with democracy.

Myself, I have doubts about whether the contemporary Republican Party is compatible with democracy.