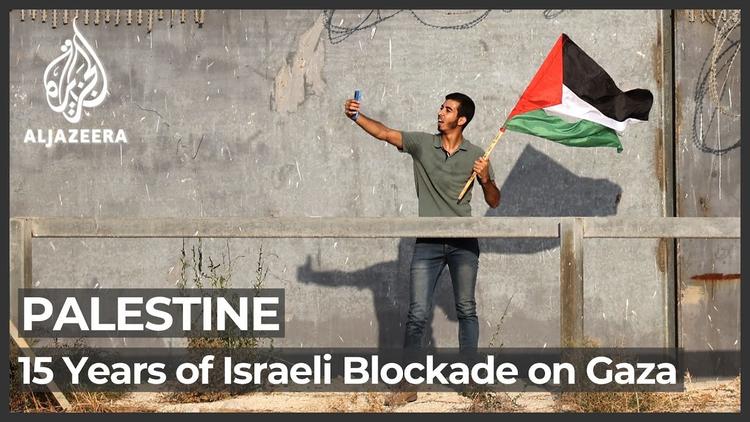 ( Middle East Monitor) – The weary Gaza Strip has been languishing for more than 15 years under an inhumane land, sea and air blockade imposed by Israel. It was put in place following the Palestinian election in 2006 which was won by Hamas.

Israel’s collective punishment of the Palestinians in Gaza continues to expose the ugly face of its decades-long occupation and apartheid. It has also exposed the awful complicity and hypocrisy of the international community which has done little, if anything at all, to help the Palestinians to resist both the blockade and the occupation (quite the reverse, in fact), but rushed immediately to help Ukraine when Russian troops invaded in February.

Young Palestinians have grown up knowing nothing but Israel’s cruel siege; a ten year old in 2006 may well be married with children of his or her own now, but has yet to see a commercial ship docking in Gaza because Israel still denies Palestinians the right to build their own seaport. Indeed, the occupation state has attacked and hijacked vessels heading for Gaza with humanitarian aid. The most serious of these attacks in international waters was the hijacking of the Mavi Marmara and other ships in 2010, during which Israel shot and killed nine Turkish activists; a tenth died later of his wounds. Their only “crime” was to be taking much-needed aid to the Palestinians in Gaza.

Gaza’s only airport was destroyed by Israel in 2001. Its construction was a bid by the Palestinian Authority under Yasser Arafat to link the proposed Palestinian state with the world before Israel intervened and aborted that dream before it could even take shape. And this was years before that fateful election when the people of occupied Palestine — not just in Gaza — dared to exercise their democratic right and voted freely for a Hamas government.

The Israeli blockade has condemned hundreds of very sick Palestinians to death because they were not allowed to travel abroad to receive life-saving treatment. Thousands, including me, have lost out on university scholarships overseas because of the repeated closures of the Gaza Strip’s only pedestrian border crossings at Erez with Israel and Rafah with Egypt.

The hugely damaging economic impact of the blockade has sent the unemployment and poverty rates in Gaza soaring. The UN Relief and Works Agency for Palestine refugees (UNRWA) revealed last year that 59.1 per cent of the Palestinians in Gaza live in “extreme poverty”; just over 50 per cent of the population are unemployed. The shocking effects of the Israeli blockade have been exacerbated by the coronavirus pandemic and the Russia-Ukraine War that has taken food prices to an unprecedented high. If there was a humanitarian crisis in Gaza before, it’s a catastrophe now.

Amid all of these serious developments, it is time for the Palestinians living abroad; Arab and Muslim organisations; and justice-loving people across the world to assume their moral and humanitarian responsibilities by standing with the blockaded territory.

There are thousands of successful Palestinian businessmen and women living in the diaspora; many feel that they have to do something to help their fellow Palestinians struggling to survive in the occupied and besieged areas. This doesn’t just mean making charitable donations, although they are most certainly welcome. The Palestinians in Gaza need solutions based on creative ways to provide employment and development opportunities. Nobody wants to depend on charity all the time, and the Palestinians are no different in this respect.

There are thousands of unemployed graduates in Gaza just waiting for such opportunities, either at home or abroad. The pandemic has shown us the way with home working now the norm across almost every economic sector. Skilled freelancers based in Gaza have enormous potential and can undoubtedly perform many roles if only they are given the chance to show what they are capable of.

We need to appeal to Arab and Muslim civil society groups to take action in support of the Gaza Strip and its people. We know that there is a lot of pressure placed on anyone supporting the Palestinians by the US and Israel, especially through pro-Israel lobby groups in the West, but there should always be a way to help an oppressed people who have largely been abandoned and left to stand alone in the face of a brutal occupation and siege.

Kuwait is a positive example of what can be done. It has experience of hiring the graduates of Gaza’s universities, which has helped to create hope for their families. I would urge Arab and Muslim organisations to consider such an approach when seeking new employees. They can not only give jobs to skilled and well-qualified Palestinians, but also help to ease the effects of the cruel Israeli siege in the process. Productive and sustainable projects rather than seasonal work could lead to permanent job opportunities for the deprived young people of occupied Palestine.

Support for Palestine and its people is growing across the world, with the now international Boycott, Divestment and Sanctions (BDS) campaign and other activism keeping the issue in the headlines. One consequence of Israel’s frequent military offensives against the Palestinians, especially in Gaza, is that awareness is increasing and ever more public pressure is placed on the occupation state to end its hostilities.

Ordinary people are starting to speak out in huge numbers, and politicians are aware of this and its possible impact on votes. The Black Lives Matter movement prompted a great response around the world, attracting support across religions, nationalities and ethnicities. The global outrage over the heinous murder of popular Al Jazeera journalist Shireen Abu Akleh was also hugely important, and the network has pledged to pursue the Israelis responsible through the international legal system.

Economic conditions are difficult the world over, but the effects are worse in places like the Gaza Strip. The blockade is not a natural disaster or suchlike; it is a deliberate strategy by a supposedly democratic state to keep people in poverty and hungry. Now is the time, therefore, for an upsurge of support for the Palestinians in the Gaza Strip. Well-coordinated advocacy for Gaza is required to produce not only pressure on the international community to do something to end Israel’s blockade and occupation, but also to provide opportunities for the Palestinians to help themselves to get out of this dire predicament.