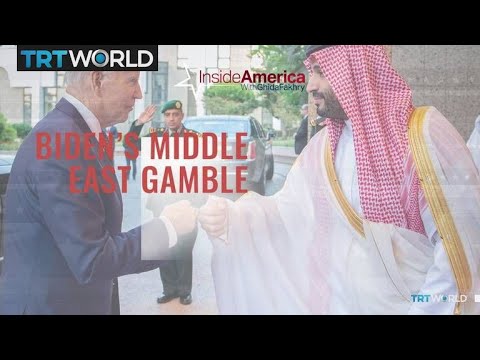 ( Foreign Policy in Focus ) – If you thought the polarization of politics in the United States was corrosive, brace yourself for the even more corrosive polarization of geopolitics. By John Feffer | July 20, 2022

The fist bump has been the default method of person-to-person contact in the COVID era. Shaking hands is too intimate and bumping elbows is too awkward. But the brief collision of fists has been deemed just about right to avoid the risks of both mutual contamination and mutual embarrassment.

Perhaps Joe Biden’s advisors thought that a fist bump between the president and Saudi leader Mohammed bin Salman (MbS) would also somehow avoid the appearance of contamination and embarrassment, in this case of the political variety. Certainly, they were worried about the near-radioactivity of MbS. The crown prince is responsible for the murder of a Washington Post journalist, the ongoing war in Yemen, and innumerable human rights abuses in Saudi Arabia. Indeed, on the campaign trail, Biden had promised to turn the Saudi autocrat into a veritable “pariah.”

Shaking hands with such a devil seemed inconceivable for a president determined to distance himself from the callous disregard for human rights of his predecessor. But perhaps a fist bump…?

Biden reports that he challenged MbS by bringing up the murder of Jamal Khashoggi and other human rights concerns. But the president didn’t travel all the way to Saudi Arabia to lecture the crown prince. He was there to grease the wheels of the global economy—quite literally—by persuading Saudi Arabia to release more oil and drive down gas prices, which he ultimately failed to do.

That the U.S. president puts the price of gas higher than the value of human rights is no doubt disturbing. But it’s also entirely consistent with U.S. policy toward Saudi Arabia for the last 80 years of handshakes with sheiks.

Perhaps more disturbing is the moral calculations forced upon the White House by Russia’s invasion of Ukraine in February, which increasingly resemble the trade-offs of the Cold War era. During that period, the United States made alliances with various authoritarian leaders in order to advance the larger goal of containing the Soviet Union. The Biden administration is pursuing similar compromises across the political spectrum—from Saudi Arabia and Egypt to Venezuela and India—to isolate the Soviet Union’s largest successor state, Russia.

Successive U.S. administrations attempted to influence policy in the Middle East to preserve access to the region’s natural resources and to prevent other outsiders (such as the Soviet Union) from gaining a toehold. The George W. Bush administration went a step further by effecting regime changes in Afghanistan and Iraq, kicking off an attempt to promote democracy across a large swath of the region. The United States no longer needs Saudi oil or Qatari natural gas, not directly at least, and the Soviet Union has disappeared. The region is no more democratic today than it was 20 years ago. Even Tunisia, the one country to crawl from the wreckage of the Arab Spring with a fledgling democracy, succumbed to a coup last year.

So, you might think that the United States, largely energy independent and a woeful failure at promoting democracy in the Middle East, would stay away from the region.

Think again. The Biden administration is so determined to stay in the game that it is bending over backwards to curry favor with the region’s theocrats and authoritarians. In addition to meeting with the Saudi leadership, Biden took time out to chat with Egyptian strongman Abdel Fattah el-Sisi on the sidelines of the Arab Summit, which was another opportunity to subordinate human rights concerns to more material matters. Earlier, a trip to Jerusalem offered Biden a chance to burnish his pro-Israeli credentials and reinforce the two countries’ military relationship. Benjamin Netanyahu is, for now, on the sidelines of Israeli politics. But he succeeded in pushing the country so far to the right that it has flirted with authoritarianism. Like Trump, Bibi is planning his political comeback as Israel prepares for its fifth election in four years.

Central to the semi-alliance between the United States and Israel is a shared suspicion of Iran. The Biden administration is still trying to revive the Obama-era nuclear agreement with Tehran that the Trump administration foolishly scrapped. A ninth round of talks just finished up in Doha with “no progress,” according to the State Department. Israel is talking about military options to prevent Iran from going nuclear, a scenario the Biden administration would like to avoid but may be forced into endorsing because of Israeli (and Republican) pressure.

Exacerbating this situation is closer military cooperation between Tehran and Moscow. According to news accounts this week, Iran is offering to sell the Kremlin both armed and unarmed drones to replace what Russia has lost on the battlefield in Ukraine. This is the reverse of the traditional arms flow, which suggests both that Russia is facing critical hardware deficits and that the sanctions are working. Putin himself is in Tehran this week to cement the relationship.

Biden was quick to point out in his remarks at the summit of Arab leaders that his visit was geopolitical in nature. “We will not walk away and leave a vacuum to be filled by China, Russia or Iran,” he told the autocrats brought together by MbS. Forget about nature: it’s the State Department and the Pentagon that abhor a vacuum!

To remain anchored in the Middle East, then, the administration will have to work with some pretty shady characters. Increasingly, that’s going to be the norm for U.S. foreign policy.

The Future of Fist Bumps

Donald Trump, an infamous germaphobe, was all about the handshake. Here he is with North Korean leader Kim Jong Un. Then there’s the grab-and-pump technique with Russian leader Vladimir Putin. Trump looks like he’s never going to let go of Mohammed bin Salman in this video from 2017. Philippine leader Rodrigo Duterte got a shake and a shoulder pat while Indian strongman Narendra Modi received an awkward grope of a benediction.

Is there an autocrat that Trump didn’t seek out for the laying on of hands? Trump and Brazil’s Bolsonaro, Trump and Thailand’s Chan-o-cha, Trump and Sisi, Trump and Xi Jinping. I’m sure that if he could, Trump would shake the hologram hands of Augusto Pinochet and Ferdinand Marcos.

Well, that’s Trump, you might say. He loved right-wing autocrats—and even a few putative left-wing ones as well. But now he’s out of the White House and, inshallah, he’ll stay that way.

Unfortunately, however, cozying up to autocrats remains a powerful force in the United States. Partly, that’s a function of U.S. history, partly that’s a legacy of Trump’s reign, and partly that’s a feature of the new cold war descending upon geopolitics.

The United States has long made deals with dictators, going back to the despotic Napoleon and the Louisiana Purchase. In the Cold War era, the United States looked the other way when men behaved badly, and even provided them with important assistance, as with Somoza in Nicaragua, Sukarno in Indonesia, and the Shah of Iran. Beginning with the Carter administration, however, the United States at least began to pay lip service to human rights and sometimes even severed relations with previous allies over their records.

Trump represented a step backwards for he was not interested even in paying lip service to human rights. In the Middle East, Saudi Arabia was a key ally because of its anti-Iran policies and Trump’s bromance with MbS. Thanks to Jared Kushner’s Abraham Accords, the Trump administration helped unite Arab despots and a right-wing Israeli establishment, squeezing out the Palestinians and throwing dissidents in the region to the wolves.

The Biden administration is not likely to challenge these changes, particularly in the wake of Russia’s invasion of Ukraine. Western governments need Arab despots on their side, if not to impose strict sanctions on the Kremlin then at least to replace Russian energy imports, especially to Europe. Fist bumps of friendships are the outward sign of strengthened economic and military relationships.

It’s not just the Middle East. The Biden administration has effectively fist-bumped the Maduro government by offering some sanctions relief in order to get more Venezuelan oil into the global market. It has ignored the dismal human rights record of Narendra Modi—going far beyond a fist bump to an enthusiastic embrace—in order to swing India more firmly onto the side of the United States. It has refused to reverse the Trump administration’s astonishing recognition of Morocco’s annexation of Western Sahara, providing a fist bump of additional military assistance to the north African country.

Discussions of a reemerging Cold War between the United States and Russia—which overlaps with worsening relations between Washington and Beijing—focus for the most part on the risks of war. That is entirely appropriate, especially given the heightened risk of a nuclear exchange.

But another critical aspect of this new Cold War are the myriad moral compromises that the United States makes in order to secure the cohesion of its bloc of allies. Isolating Russia—and containing China’s ambitions—will be used as the prime directive that overrides any squeamishness around extrajudicial murders, imprisoned critics, and shuttered media outlets taking place in the countries of our putative allies. And that means a lot more future fist bumps with murderers like Mohammed bin Salman.