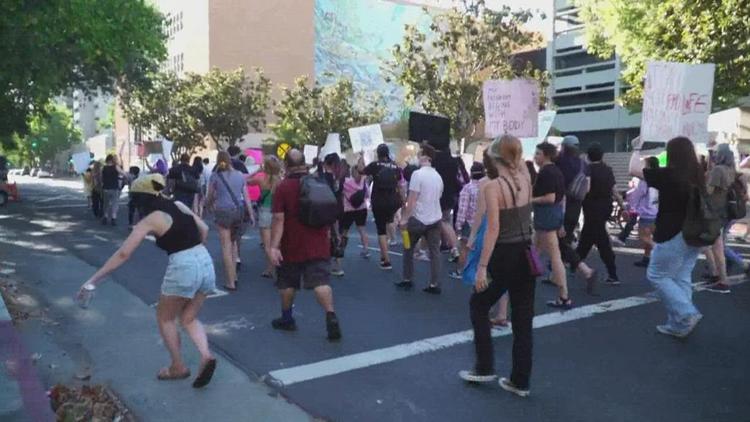 ( Waging Nonviolence ) – On Friday, the Supreme Court officially overturned Roe v. Wade, the landmark 1973 ruling which ensured the right to abortion. After a May leak of the drafted decision, advocates have had time to mobilize and prepare for the potential reversal of Roe, but had hoped that there was still potential for protest to influence the court’s ruling in Dobbs v. Jackson Women’s Health Organization. While protest didn’t change the court’s decision, advocates are refusing to allow a right-wing court to imperil access to reproductive healthcare and are beginning to organize across the nation.

This reversal of Roe has immediately triggered anti-abortion laws in Kentucky, Louisiana, Oklahoma and South Dakota, making abortion immediately illegal. Nine other states have trigger laws that will take effect in the coming weeks and as many as 28 states are likely to outlaw or strictly restrict abortion in light of this decision.

The national advocacy organization UltraViolet, whose mission is to improve the lives of women of all identities and backgrounds by disrupting patriarchy and creating a cost for sexism, has called for mass mobilization. “This is just the beginning, and what happens the next several days is critical,” they tweeted. “The pro-abortion movement is the majority and we’re calling on you to join us in mobilizing to show our overwhelming support for reproductive rights and opposition to all who want to take them away.”

Other advocate groups, like the Feminist Front, have begun to publicize action steps for mobilization and a coalition of reproductive justice organizations, which includes Planned Parenthood and NARAL Pro-Choice America, have organized a hub to publicize upcoming protests, called We Won’t Go Back.

As activists take to the street, reproductive advocates have cautioned protesters to be mindful and safe while organizing and to take advantage of free legal help like the National Lawyer’s Guild’s pocket-sized know-your-rights booklets and other mass defense resources.

While some advocates have called for an “abortion Underground Railroad,” in their response to the repeal of Roe, Black and Brown reproductive justice organizers have asked white activists to instead support the already existing “network of abortion funds, practical support volunteers, and advocates who already work tirelessly to make every community a safe haven for those seeking access to abortion,” as Prism, an independent and nonprofit newsroom led by journalists of color, has reported.

This infrastructure includes already-existing organizations like Shout Your Abortion, the National Network of Abortion Funds,  the Miscarriage + Abortion Hotline, If/When/How and Access Reproductive Justice, among others.

As Prism has reported, “More recently, hashtags like #AuntieNetwork and #UndergroundRailroad2019 surfaced online in an attempt to link people to reproductive care. No matter how well-intentioned, these efforts are fraught with potential danger and directly undermine the work abortion funds have been doing and will continue to do.”

Zane McNeill is the founder of the DEIJ organization, Roots DEI Consulting and Policy, and co-manager of the labor rights group, Rights for Animal Rights Advocates (RARA). They have published anthologies on anti-carceral veganism and queer and trans liberation with PM Press, Sanctuary Press, and Lantern Publishing and Media. They are also a contributing writer with Sentient Media and Law@theMargins.