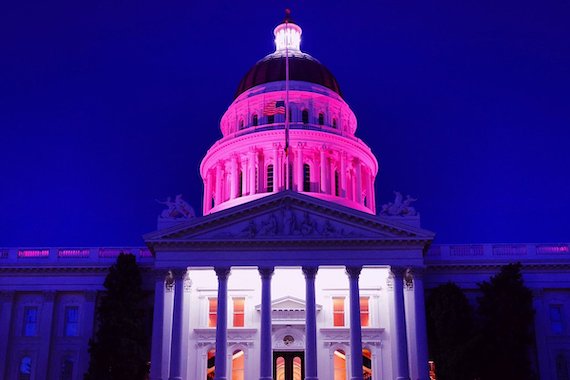 ( Cronkite New ) – PHOENIX – Health care clinics in states including California, New Mexico, Colorado and Washington are preparing to become “safe havens” for pregnant people living in Arizona and other places where abortions are restricted or banned.

Since the U.S. Supreme Court overturned Roe v. Wade on June 24, medical providers, lawmakers and governors in states controlled by Democrats have promised that those in need of abortion services will be able to get them – so long as they can travel for such purposes.

The dome of California’s Capitol was lit in pink after the U.S. Supreme Court overturned the landmark decision that had legalized abortion across America. California is one of several states positioning itself as a “safe haven” for those seeking legal abortion services. (Photo courtesy of Office of the Governor of California) 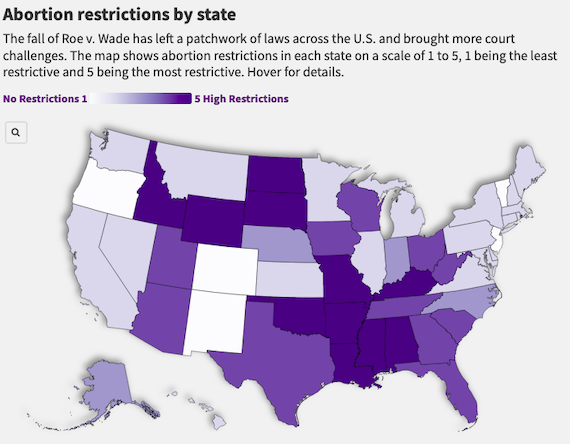 With Roe no longer the law of the land, at least 26 states are certain or likely to ban abortion, according to the Guttmacher Institute, a research organization that supports abortion rights.

After the high court’s ruling, the governors of Oregon, Washington and California signed an agreement vowing to “defend access to reproductive health care, including abortion and contraceptives.”

In Colorado, Gov. Jared Polis said the state would not “retreat to an archaic era where the powerful few controlled the freedoms over our bodies and health decisions.” He signed a measure in April codifying access to abortion into state law.

Similarly, New Mexico Gov. Michelle Lujan Grisham signed an executive order on June 27 guaranteeing access to abortion and saying the state would not “entertain extradition attempts from other states” related to anyone receiving or performing abortion services.

“As long as I am governor, abortion will continue to be legal, safe and accessible in New Mexico,” she said.

Most states in the U.S. have some restrictions on abortion, and several now have complete bans, with exceptions only to protect the health of the pregnant person or, in some cases, when the pregnancy resulted from rape or incest.

In Arizona, a 15-week abortion ban is set to take effect in September. But there’s also a pre-statehood ban on abortion, and Attorney General Mark Brnovich says he’ll go to court to ensure that ban is enforced.

The convoluted landscape has left patients and providers in Arizona unsure of what services they can receive or provide. As a result, Planned Parenthood Arizona and other health care clinics in the state have stopped providing abortion services. 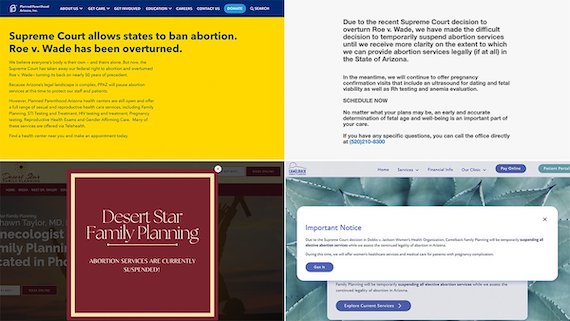 “There’s going to be a lot of fear instilled in reproductive health care providers … and a lot of patients are not going to get the care that they deserve over the next couple of years while this is being sorted out and fought in the courts,” said Dr. Victoria Fewell, a Tucson OB-GYN who heads Arizonans for Reproductive Freedom.

Arizona providers and groups that raise money to help low-income individuals pay for abortion services are gathering information about what resources are available in states where the procedure remains legal.

“Colorado and California are going to be big options,” Fewell said.

Sue Dunlap, president and CEO of Planned Parenthood Los Angeles, said during a webinar after Roe was overturned that clinics had been preparing to expand services and take on out-of-state clients long before the court took up the issue.

Planned Parenthood Los Angeles is one of the largest providers of reproductive health care services in Los Angeles County and sees some 250,000 patients at 21 health centers annually.

“We’ve been planning for this moment for years,” Dunlap said, adding that the organization has worked to shore up its clinical infrastructure, build relationships with hospitals and other health care providers, and help train more doctors to provide abortion care.

However, others worry that clinics in states without abortion restrictions won’t be able to handle the flood of patients.

After Roe, groups focus on how to help pregnant people

Sapna Khatri, a teaching fellow and reproductive care policy expert at UCLA’s School of Law, said some Illinois officials told her they’re expecting a 5,000% to 7,000% increase in abortion patients because the state is adjacent to others that limit or ban the procedure.

“So this means that states like California, Illinois, Washington, Colorado where we have abortion protections … abortion clinics and providers are going to be seeing a much greater strain on their services,” she said.

Advocates for reproductive freedom are concerned about the equity divide that comes with forcing people to travel for abortion services, and they note that most people seeking abortions in the U.S. are impoverished.

California lawmakers have begun to establish state funds to help pregnant people afford the cost of travel, while nonprofits and associations, such as the National Abortion Federation and Indigenous Women Rising, work to pool money and resources for those in need.

Apple, Disney and Amazon are among the companies that have told employees they’ll help cover expenses for out-of-state care.

But even as some take steps to make traveling for an abortion easier, abortion foes have raised the idea of outlawing out-of-state travel for services.

In Missouri, which banned abortions following Friday’s court ruling, Republican state Rep. Mary Elizabeth Coleman introduced a measure earlier this year to make it illegal to perform or “aid or abet” an abortion for a Missouri resident “no matter where that abortion” occurred.

“There’s billboards that say, ‘Come to Illinois for your abortion.’ That kind of advertising would be illegal,” Coleman said in introducing the proposal.

In his concurring opinion on Roe, Supreme Court Justice Brett Kavanaugh addressed that concern, writing that the constitutional right to interstate travel would prevent states from imposing such restrictions.

“May a State bar a resident of that State from traveling to another State to obtain an abortion? In my view, the answer is no,” he wrote.

In California, more than 15 reproductive care bills are moving through the state Assembly, ranging from establishing funds to help individuals get abortions to prohibiting law enforcement from arresting people who aid those seeking abortions.

In November, Californians will vote on a proposed amendment to the state Constitution to guarantee those within state lines the right to an abortion and contraceptives.

Joining Dunlap and others in a webinar after the June 24 ruling, Kamlager likened the efforts of California and other states to help those seeking abortions to the network once used to ferry enslaved African Americans to freedom.

“We have an obligation to create an underground railroad for reproductive freedom that will allow women of all races, of all ethnicities, of all religions to be able to make decisions about their body,” she said, “to protect themselves and their families and their futures.”

Cami Parrish expects to graduate in August 2022 with a bachelor’s degree in journalism and a minor in political science. Parrish has interned with The Arizona Republic and has served as executive editor of Downtown Devil.

Troy Hill graduated in May 2022 with a bachelor’s degree in journalism and a minor in film production. Hill worked for the ASU Lodestar Center for Philanthropy and Nonprofit Innovation and is working for the Phoenix news bureau.

Ros Hedgecoth expects to graduate in summer 2022 with a master’s degree in mass communication. Hedgecoth hopes to produce for a local news station after graduation.

Adriana Gonzalez-Chavez expects to graduate in May 2024 with a bachelor’s degree in journalism and a minor in communication. Gonzalez, who has interned with Donor Network of Arizona and reported for The State Press, is working for the Phoenix news bureau.