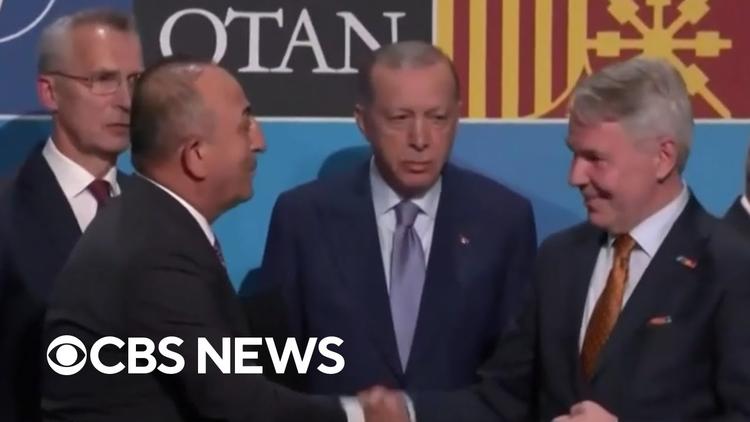 Ann Arbor (Informed Comment) – Tayyip Erdogan, the president of Türkiye (formerly Turkey) spent this spring vowing that Sweden and Finland would not be admitted to NATO because of their stance on the Syrian Kurdish organization, the YPG. He seemed adamant, but the stance was clearly a bargaining position, whereby he sought to wring as many concessions from the two Scandinavian countries as possible, and from the U.S. and NATO, before acquiescing.

This week, as NATO held its summit in Madrid, Erdogan folded and said his country would welcome the two new entrants to the treaty organization. NATO immediately issued an invitation to the two countries to join, with the process likely to be fast-tracked. The two had applied for NATO membership out of fear that without it, Russian President Vladimir Putin might do to them what he did to Ukraine.

The big losers in these developments are Putin, who lambasted NATO for expansionism, and the Syrian Kurds, whose major paramilitary force has lost further legitimacy in the eyes of Europeans.

President Biden observed at the NATO summit in Madrid that Putin had sought the Finlandization of Europe, but got the NATO-ization of Europe. Biden also announced a bigger US troop presence in eastern Europe, including in Poland. Washington’s confrontational policy with a nuclear-armed power, however, poses dangers for the future.

The Turkish government has waged a battle against the PKK, the Kurdistan Workers Party, for over forty years. Some 40,000 persons are thought to have been killed in the dirty war fought between the PKK and the Turkish army. The PKK was initially a Marxist group, and the US feared it as an arm of Moscow during the Cold War, concurring with Türkiye that it is a terrorist group. Kurds comprise about 20% of Türkiye’s population and are concentrated in the poverty-stricken southwest of the country. Opinion polls and voting patterns do not suggest that very many of them have separatist tendencies.

Ankara had defeated the PKK, capturing its leader Abdullah Ocalan, by the late 1990s. Then the movement got a new lease on life when George W. Bush invaded Iraq, since in the subsequent chaos, some 5,000 PKK guerrillas were able to establish a base at Qandil in Iraq’s northeastern, heavily Kurdish, highlands.

Then when the Syrian civil war broke out in 2011, the Syrian Kurds threw off central government rule. The Democratic Union Party took over the Syrian Kurdish regions, with its YPG paramilitary. The YPG is viewed by Ankara, which was petrified at its new autonomy since it is right on Türkiye’s border, as merely the PKK by another name. The US and most other countries did not agree, seeing the YPG as an ally against the ISIL terrorist organization and against the Baath government of Bashar al-Assad. But Erdogan in Türkiye branded the YPG terrorists.

After the US used the YPG to take Raqqa and defeat ISIL, Trump abruptly agreed in the fall of 2019 to pull US troops out of Syria’s northeast and to allow Erdogan to invade northern Syria and attack the YPG, in campaigns that also killed, wounded and displaced thousands of ordinary Kurdish villagers.

Finland and Sweden, which has a sizeable Kurdish expatriate community, condemned Türkiye’s incursions into Syria and said they would decline to sell certain arms to Ankara as a result.

Erdogan saw an opportunity in their application for NATO membership, over which he had a veto as a longstanding member of the treaty organization, to push the two countries away from their stance on the YPG.

Altun Fahrettin, the Turkish communications director, announced on Twitter according to AA that all parties “agreed to full cooperation against the terror organization PKK and all its extensions . . . Sweden and Finland committed to stand with Türkiye against all forms of terrorism and promised not to provide support to the PYD/YPG and FETO terror groups.” They also, he said, committed to removing any arms embargoes on Türkiye and to increase military cooperation with the country. He concluded, “they have committed to revise counter-terrorism laws to address our concerns regarding terror activities cloaked under pseudo political activities.”

So Erdogan got the commitments he wanted on the Kurdish groups accused of terrorism, including the YPG, about which there is disagreement among NATO members.

Natasha Turak at CNBC reports that another sweetener to the deal may have been an offer by President Biden, who is meeting with Erdogan in Madrid, to allow Türkiye to buy F-16s. The Pentagon became wary of such sales to Ankara after the latter showed interest in the Russian S-400 missile defense batteries, which are connected to the internet of things and so could spy on nearby U.S. high-tech weaponry.

The episode shows the way in which Türkiye has benefited from the Russian war on Ukraine. Ankara has declined to join the US-led NATO economic boycott of Russia, but continues to sell deadly drones to Ukraine. It was able to change Swedish and Finnish foreign policy on Türkiye and the YPG, and to emphasize its importance to Washington as NATO’s easternmost bulwark.