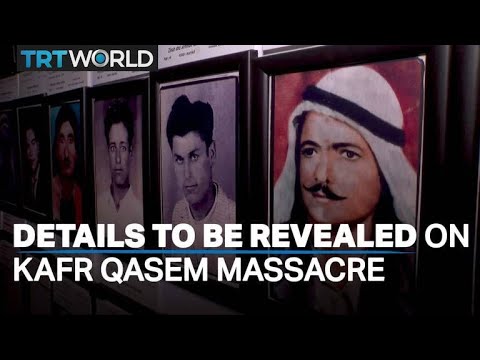 ( Middle East Monitor ) – On Friday, archives of the Israeli forces released court documents related to the trial of Israeli soldiers who brutally massacred 49 Palestinians on 29 October, 1956. The massacre took place in the Palestinian town of Kafr Qasem.

It was the first day of the Israeli, British and French invasion of Sinai, which came in response to Egypt’s closure of the Suez Canal. Israel imposed night curfew on most of the areas with high Palestinian (Arab) populations in Israel.

Late Brigadier General, Issachar Shadmi, was the commander of the Israeli army brigade which was in charge of Kafr Qasem, located in the centre of the recently occupied Palestine that became Israel, and close to the Armistice Line with Jordan, which controlled to West Bank at the time. He ordered the curfew to start earlier that day and ordered his officers to strictly implement it.

Palestinian or Arab farmers, who were at their farms outside the village, returned home without knowing anything about the updates related to the curfew. The Border Police officers commanded by Shadmi mercilessly opened fire at the unarmed farmers, killing 49, including the elderly, women and children.

The massacre was widely condemned, even by officials from the Israeli government, which sent Shadmi and the other officers involved in the massacre to trial and sentenced all of them. The officers spent a very short time in prison before they had a presidential pardon.

Regarding Shadmi, the highest commander of the area at the time, the judges ordered him to pay a fine of 10 cents, according to Haaretz, for pushing up the curfew without the approval of the military governor. The judges claimed he did so “in good faith”. This way, the issue of the massacre was closed, but the court documents revealed on Friday disclosed new facts about it.

The transcript of Haim Levy, who was a company commander, showed that there was a clear order to shoot Palestinians who broke the curfew without knowing about the change of its starting time. Levy also said, according to the court documents, he had been told by battalion commander, Shmuel Malinki: “It is desirable that there be a number of casualties.”

Milinki told the court that he answered the soldiers, who asked him how they should deal with the Palestinians who did not know about the change in the timing of the curfew, that they should kill them. “Allah yerhamu,” he said in Arabic. It means, “May God have mercy on them.” This proves that there were plans to kill Palestinians, prepared before the massacre took place.

To prove that the intentional killing of Palestinians was a major order related to the situation at Kafr Qasem, Commander Gabriel Dahan, said, according to the Jerusalem Post, he was told by Melinki “without sentiments, it is better to have a few dead, so that there will be peace in the area”.

During the hearings, the Israeli soldiers mentioned, several times, a plan called “Hafarferet” (“Mole”), which was prepared to be implemented during the invasion of Sinai, but Israel wanted it to start spontaneously, not to be initiated by its army, like the invasion of Egypt.

As part of this operation, Levy said that there were measures meant to move the Palestinians from their homes, including curfew imposition, property confiscation and moving entire villages from place to place. According to the Jerusalem Post, Levy said, the case of Kafr Qasem, “the entire population of the village was to be moved to Tira.”

The aim was not only to move Palestinians from one area to another area inside Palestine or Israel, but to move them out of the country. Levy said that the Israeli forces were told “not to put lookouts and checkpoints on the eastern side [of Kafr Qasem] so that if the Arabs decided to flee, they could and would be allowed to go over the Jordanian border [Armistice Line].”

Levy also said he understood there was a direct link between shooting the Palestinians, who violated the curfew, and changing Israel’s demographic makeup. “The connection is that, as a result, part of the population would get scared and decide that it is best to live on the other side. That’s how I interpret it,” he told the judges, according to Wafa news agency.

All of these issues prove that Kafr Qasem massacre was part of an ethnic cleansing operation and the following court proceedings, which were kept secret for more than six decades, were just an attempt to whitewash Israeli army crimes . . .

This work by Middle East Monitor is licensed under a Creative Commons Attribution-NonCommercial-ShareAlike 4.0 International License. The article has been edited for house style and excerpted, and the title changed.