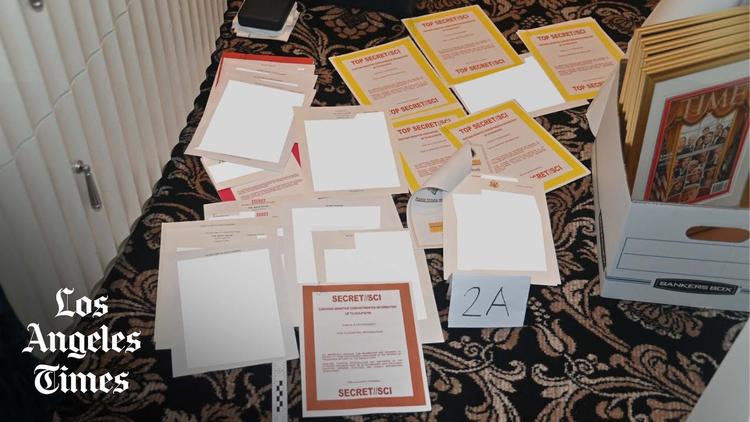 Ann Arbor (Informed Comment) – District Court Judge Aileen Cannon on Friday ordered the release of the inventory of US government documents seized by the FBI in its execution of a Department of Justice warrant authorizing the search of Donald Trump’s Mar-a-Lago resort.

Sam Cabral at the BBC explains that the FBI searched not only a storeroom where government documents were kept illegally, but also Trump’s office, where there were also classified and top secret documents, mingled with Trump’s private effects.

About 1,500 documents were taken away from Trump’s private office. Seven out of 18 top secret documents that were seized had been in Trump’s office, along with 17 of 54 secret documents. Trump clearly wanted some of these government secrets at his fingertips. But why?

All together, 100 of the documents seized by the FBI in August had some sort of classification markings.

The FBI released a photograph of some of its haul from Trump’s office this week, which showed the marking on some files of “HCS-P.” Chappell at NPR explains that HCS-P means

“HUMINT Control System Product, using the acronym for human intelligence. According to the office of the Director of National Intelligence’s classification manual, “HCS protects the most sensitive HUMINT operations and information acquired from clandestine and/or uniquely sensitive HUMINT sources, methods, and certain technical collection capabilities, technologies, and methods linked to or supportive of HUMINT.”

HUMINT means “human intelligence,” as opposed to, say, satellite surveillance. So those HCS-P files Trump had at Mar-a-Lago could have contained information about agents recruited abroad to spy on their countries, including the real identities of these agents.

The bombshell revelation that came out of the inventory, however, is that the FBI field agents recovered from Trump’s office “43 empty folders with classified banners” and “28 empty folders labelled ‘Return to staff secretary/military aide.'”

That Trump still had some 11,000 government documents that should never have left the White House is cause for alarm enough. But the internet went wild with the admission that there were empty folders, which raised the question of where the 43 sets of top secret documents are now. MSNBC commentator Glen Kirschner tweeted that Trump did not take the folders empty to Mar-a-Lago, i.e., the documents must have been somehow disposed of once they were out of government hands.

Other observers Tweeted that it was awfully suspicious that in January, 2021, Trump took thousands of government documents, some of them top secret and some of which revealed the identities of foreign agents working for the Central Intelligence Agency, and then in October, 2021, the CIA admitted to losing dozens of spies and informants abroad, who suddenly went dark. It was as though the foreign adversaries of the U.S. had suddenly discovered the identities of US intelligence assets.

Trump had in his possession sensitive papers revealing information about agents’ names, and then the agents stopped being heard from.

We have to be careful about jumping to the conclusion that Trump intentionally or inadvertently revealed US intelligence sources and methods. But someone sure as hell did.

There is a logical fallacy that goes “post hoc ergo propter hoc,” — something happens before something else, and is declared the cause for whatever happens subsequently.

There is no evidence that Trump sold these secrets to e.g. Russia, and we shouldn’t jump to the conclusion that Trump caused all those intel assets to go blank.

There could have been a double agent working at CIA headquarters who spilled the beans to, e.g., Russia and China. It wouldn’t be the first time — consider Aldrich “Rick” James.

Still, the sad thing is that we can’t dismiss out of hand the possibility that Trump was selling government secrets to the highest bidder, however unlikely that is to be true, given all the other underhanded things we know Trump has done.