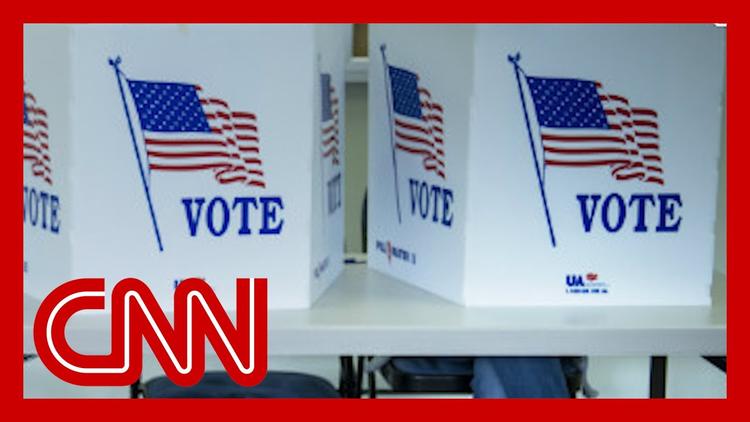 Republican candidates who claim that the 2020 election was stolen from Donald Trump have been nominated for governor in four critical swing states, raising concerns that if elected they could try to sway election results in 2024 and beyond.

In Arizona, Pennsylvania, Michigan and Wisconsin, Republican primary voters elected a candidate who has denied the results of the 2020 election and believes that voter fraud influenced the results. GOP voters also nominated an election-denying candidate in Maryland, though he has less chance of winning in a blue state.

Many more Republican gubernatorial candidates have questioned whether the 2020 election was legitimate or refused to say that President Joe Biden was the rightful winner. But these five are more vocal election deniers, who would be willing to call for audits or move to decertify results.

If they win in November, they will have less of a direct impact on elections than the six election deniers who are running for secretary of state, a position that’s the chief election official in most states. But the governors’ impact could still be significant.

They will sign or veto legislation governing the administration of elections, which could affect which voters are able to cast ballots and how much financial support counties get to administer elections. Governors can also issue executive orders concerning election administration in emergency situations. And in Pennsylvania, the governor gets to appoint the secretary of state, giving that governor immense power over elections.

Currently, state law determines whether governors play a part in the certification of electoral votes, but in every state, governors are then supposed to transmit those votes to Congress.

If Congress were to pass a bill to modernize the Electoral Count Act to reform how electoral votes are counted, governors could be empowered to select their state’s presidential electors in a new way.

The current proposal, introduced by a bipartisan group of senators, requires that at least six days before the Electoral College meets, each governor must submit a “certificate of ascertainment” identifying their state’s presidential electors, and that document would be “conclusive.”

The provision is included to prevent states from submitting more than one slate of electors, as seven states did in 2020 when Trump supporters submitted fake electors.

If a rogue, election-denying governor chose to certify the electors with fewer votes, the certification would then go to state and federal courts, who would have the final say.

Marc Elias, an elections lawyer who has worked for Democratic campaigns and elected officials, has expressed concerns that the reform bill gives too much power to potentially election-denying governors.

“One would hope that a federal court would overturn the results in a particular state if the ‘Big Lie’ governor, for instance, certified the presidential candidate who received fewer lawful votes than the candidate who actually won,” he wrote for Democracy Docket, a progressive voting advocacy group he started. “But nothing in this law assures that or even expresses that preference over the conclusiveness of the governor’s certification.”

But Rick Pildes, a constitutional law professor at New York University, said that’s a misunderstanding of the bill.

He said currently, governors have too much discretion when it comes to transmitting the document certifying the state’s electors. “The concern there is a governor who comes up with reasons to refuse to send the result that the state has already certified as the proper result of the election,” he said.

Article continues after bonus IC video
CNN: “Election deniers are changing how midterm ballots will be counted in this state”

Several of the GOP candidates for governor say that in 2020, they would not have transmitted their state’s certified electors.

But the Electoral Count Reform Act would protect against that possibility by adding judicial review. Pildes also said that a simple tweak, making it clear that the results of the judicial review would preempt the governor’s decision, could make that even clearer and has been supported by senators.

Sens. Joe Manchin III of West Virginia, a Democrat, and Susan Collins of Maine, a Republican, who sponsored the legislation, have said they expect to pass it before the end of the year. That would mean it could be enacted before the 2024 presidential election cycle and before Democrats potentially lose the U.S. House in the midterm election.

Kari Lake, a former news anchor, is a staunch supporter of Trump’s baseless claims that he won the 2020 election. The GOP nominee in Arizona is also endorsed by Trump and has suggested that she won’t accept the results of her upcoming election if she loses.

“If we don’t win, there’s some cheating going on. And we already know that,” she said just hours before polls closed on primary day.

After she won the race, she told reporters: “We out-voted the fraud, we didn’t listen to what the fake news had to say.”

Lake said during an Arizona Republican debate in June that she would not have certified Biden’s victory in Arizona.

In the same debate, she called the election corrupt and said — with no evidence — that 34,000 ballots “were counted two, three, and four times” in Arizona and that 200,000 ballots were trafficked by mules. “He lost the election, and shouldn’t be in the White House,” she said about Biden.

The nominee was at the U.S. Capitol on Jan. 6 and helped thousands of others come to the event by bus. He says he left before the riot began, but video contradicts his claim and shows him passing through police lines.

The House Jan. 6 committee has subpoenaed Mastriano for information about how he participated in events that led to the insurrection.

Mastriano has also surrounded himself with other election deniers. In June, he hired election denier and former Trump campaign lawyer Jenna Ellis to be a senior adviser on his campaign.

After the 2020 election, Mastriano led a state Senate hearing in which Ellis and Trump campaign lawyer Rudy Giuliani testified and shared false information about fraud in the election.

In Pennsylvania, the governor appoints the secretary of state. Though Mastriano has not publicly named the person he plans to select, he has hinted at his pick in interviews with far-right radio and TV programs. Mastriano has said he would appoint someone who would dramatically reform elections.

“I saw better elections in Afghanistan than in Pennsylvania,” Mastriano, an Army veteran, said while campaigning.

He has vowed that his pick for the state’s top election official would require everyone to “re-register” to vote, a requirement that would violate the National Voter Registration Act. And according to election experts consulted by Bolts magazine, a secretary of state under Mastriano could try to refuse to certify election results from Democratic-leaning counties.

Mastriano is also a user of Gab, an online platform for hate speech

Tudor Dixon, a conservative commentator, is endorsed by Trump and recently dodged the question when asked if she still believes Trump won the 2020 election. But on numerous occasions since 2020, the Michigan GOP nominee has supported Trump’s claims that fraud cost him the election.

In a debate in May, Dixon unequivocally answered “yes” when asked if she believes Trump legitimately won the 2020 election in Michigan.

And in a November tweet reply to Trump, she wrote: “Steal an election then hide behind calls for unity and leftists lap it up.”

In an interview in November 2021, Dixon blamed Michigan Secretary of State Jocelyn Benson for “not running the election the way she should have” and “in a way that was rife for fraud.” She then said that Benson provided the opportunity for Joe Biden to tilt the election so he could win.

Tim Michels, a millionaire construction executive and the most recent election denier to win a GOP primary, is also supported by Trump, although he has distanced himself from the former president in recent months and has been more hesitant to say he believes the 2020 election was stolen.

During a debate in July, Michels said that if elected, he would not prioritize decertifying the 2020 election results.

But he’s tried to appeal to all GOP primary voters, also saying he would consider signing legislation that came to his desk from the GOP-controlled Assembly to decertify the results. He said he would “need to see the details” before making a decision on decertification. Biden beat Trump in Wisconsin by about 21,000 votes.

It’s not the only time Michels has gone back and forth on his support for the former president. He also said in a debate that he wouldn’t endorse Trump if he ran for president in 2024, but then reversed course in a later campaign event.

Republicans in Maryland elected attorney and state delegate Dan Cox in the June primary over a candidate supported by the state party establishment and current Republican Gov. Larry Hogan.

Cox has been endorsed by Trump and organized buses and attended the rally outside the U.S. Capitol on Jan. 6.

“I am co-hosting two buses to the Million MAGA March/Rally with the Frederick County Conservative Club in support of President Trump @realDonaldTrump on January 6, 2021 to #StoptheSteal,” he wrote on Twitter on Jan. 1, 2021.

Later that day, he tweeted: “Pence is a traitor.”

After the election, in December 2020, he wrote on Facebook that Trump should seize voting machines. He also called for an audit of the 2020 election in Maryland, even though he wasn’t able to cite any credible evidence of fraud.

Cox has continued to deny the results of the 2020 election, writing on his social media platforms in June that the election was “the GREAT HEIST of 2020.”Hogan has called Cox a “QAnon whack job.”

Creative Commons license CC BY-NC-ND 4.0.. We ask that you edit only for style or to shorten, provide proper attribution and link to our web site.

Kira Lerner is the democracy reporter for States Newsroom in Washington, D.C. She has previously covered voting, criminal justice, and civil rights issues for publications including Votebeat and The Appeal.