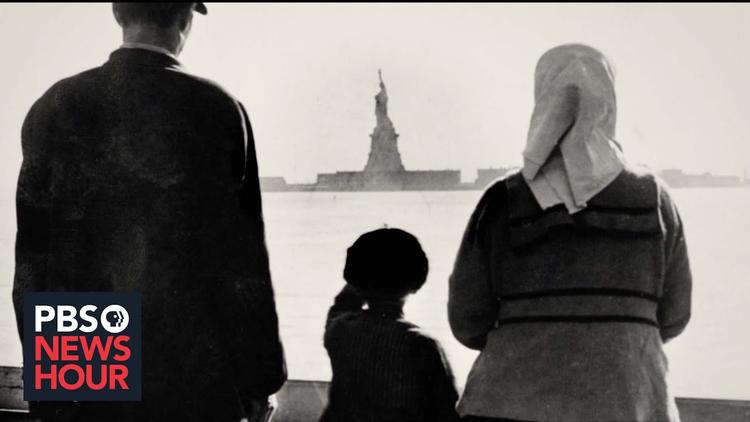 Oakland (Special to Informed Comment) – The genius of Ken Burns’ documentaries is his ability to personify history. Watching the documentary by Burns, Lynn Novick and Sarah Botstein on the U.S. and the Holocaust is a challenging experience for most people, and is especially difficult for those from Jewish families that include survivors.

I learned about Anne Frank from my mother and grandma, and read parts of her Diary when I was about the same age as she had been when she was murdered. The Holocaust documentary shows how her family’s backstory illustrates the “slow creep” of Fascism, which I view as a mischaracterization. In the context of history, it happened in a flash, after a creeping build-up that accelerated after the 1936 Olympics in Berlin.

Hearing accounts of Anne Frank from survivor Susan Helsinrath Warsinger, we learned that Anne was brighter, more thoughtful and more mischievous than most girls her age. We found out that her father owned a successful business in Berlin, and moved his family to Amsterdam as he recognized the growing threat in Germany. The Netherlands seemed like a safe place until Hitler stormed all of Europe. Borders shifted rapidly during this period, as refugees’ sought safe havens that became more ever more elusive.

The United States did not form such a haven for Jews in the age of the Holocaust. The American State Department was run by a WASPY clique of anti-Semitic bigots. Their prejudices were enforced by the residual economic pressures of the Great Depression, which fed the existing xenophobia towards all immigrants, but Jews in particular because so many of them would have fled to the U.S. if they could have. It was argued that with 25 percent unemployment, letting in large numbers of immigrants would produce riots in the streets by workers afraid for what few jobs were available to them, but it is hard to disentangle this convenient narrative from the anti-Semitic prejudices of those who most often offered it.

Sadly, the anti-Semitism that infected the State Department was never extinguished in the U.S. It has been nurtured back into prominence by Donald Trump and his followers, as has brazen racism toward other groups.

Watching the excavation by Burns, Novick and Botstein of the slow creep of an unbalanced far right in Germany reminded me vividly of what we have seen happen in the United States over the past half-decade. The Fascism of Trump’s political movement has taken over the Republican Party, and threatens to destroy the Republic. The MAGA denial of the results of the 2020 Election and its determination to rig future elections are undeniable, sinister dynamics. Their canonization of Trump leaves them with no respect for democratic outcomes. He has fueled their fears of the Great Replacement Theory and anti-Semitism in America, while trying to insult Jews into supporting him. The farther Jews become removed from the Holocaust, the greater is our tendency to euphemize and sugar-coat bad news, and even to be enticed into far-right politics. Jews who cater to Trump are a mystifying lot, ignorant as to how they contribute to our own demise by supporting him. Consider:

The basis of Hitler’s persecution was that Jews were a “race,” to be extinguished. The idea that Jews are a single race is refuted by the differences in ancestry between Ashkenazi Jews, mostly from Europe, and Sephardic Jews from North Africa and the Middle East. Trump declared Judaism to be a race, in a 2019 Executive Order. His pretext was that Jews were being persecuted on college campuses by pro-Palestinian activists. At the time, he condescended to American Jews saying, “You’re brutal killers; you’re not nice people, but you have to vote for me; you have no choice . . .” Yet this blood libel did not dissuade right-wing American Jews from supporting him.

This week, he upped the ante saying, “No President has done more for Israel than I have. Somewhat surprisingly, however, our wonderful Evangelicals are far more appreciative of this than the people of the Jewish faith . . . , U.S. Jews have to get their act together and appreciate what they have in Israel — Before it is too late!” The dramatic teachings from the Burns documentary illustrate this sort of rhetoric is no trifling matter.

Trump has exploited decades of white nationalist frustrations and taken the Republican party to the outer fringes of the far-far right. His followers now appear to view the outcomes of the Civil War and WWII as objectionable, as witnessed by their unapologetic racism and growing allegiance to right-wing dictators such as Vladimir Putin and Victor Orban in Hungary. That CPAC held their conference in Hungary speaks volumes about the Republican mindset under Trump.

Trump’s insidiousness lies in the fact that his movement is gaining strength without him. As part of the America First coalition, there are 299 Republican candidates for federal, state and local offices, who deny the results of the 2020 Election. Their goal is to rig elections, restore Trump to power and stack every level of government with people friendly to their agenda. The fall of Liz Cheney and rise of Marjorie Taylor Greene underlines the extent of the threat.

People can no more be a little bit fascist than women can be a little bit pregnant. The parallels of our present dysfunction to Sinclair Lewis’s 1935 novel It Can’t Happen Here are haunting. Donald Trump is a real-life Berzelius “Buzz” Windrip. MAGA fulfills Lewis’s prophecy, depicted in his novel, of the League of Forgotten Men, while the army Trump commanded to storm the capital is the realization of Lewis’s Minute Men, a paramilitary force intervening in politics. His followers’ intent is to delegitimize any election results they don’t like and to take over every level of government. It IS happening here, and it must be stopped to prevent Civil War II, or the breakup of the United States.