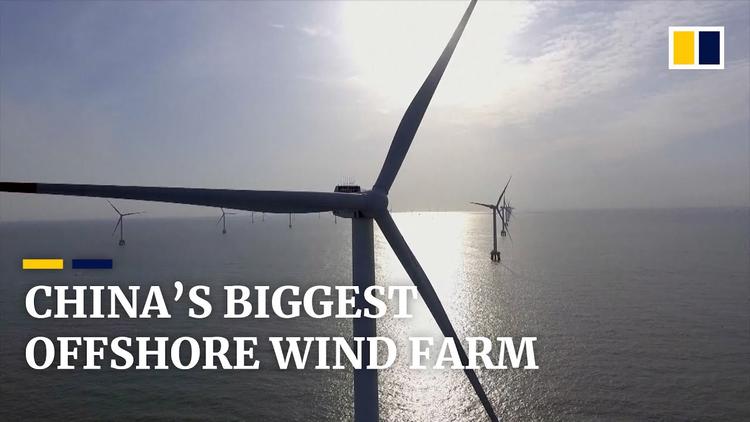 The United States has almost no offshore wind now, but the Biden Administration has a goal of 30 gigawatts by 2030 and the Interior Department has leased large tracts of coastal waters to companies seeking to build offshore wind facilities.

The upshot is that one city, Chaozhou, intends to outstrip the entire United States in offshore wind-generated electricity.

China is a leader in this technology, so that 45% of the entire offshore wind capacity in the whole world is in China. Last year it opened a giant offshore wind facility off Jiangsu Province in the Yellow Sea.

Asia is disorienting for Americans because it is full of enormous, vital cities and provinces to which we seldom give much attention, even if we have heard of them, which isn’t often. I once spent some time as a Distinguished Visiting Professor at Lingnang University in the north of Hong Kong, only a 20 minute drive from Guangdong Province, where Chaozhou is located.

Chaozhou has a population inside city limits of roughly 2.5 million, making it similar to Houston or Chicago in the United States. So this would be like Houston putting in 45 gigs of new offshore wind power all by itself. While there are plans for such facilities in the Gulf of Mexico off Houston, they are presently far more modest.

Chaozhou is a major ceramics center, with 12,000 companies specialized in making this material. It not only makes and exports household ceramics but also ceramic wafers for electronics and optical communication ceramics. The city elders want to create 5 manufacturing hubs in the city to expand beyond this industry to “modern agriculture, coastal industries, cultural tourism and emergency response industry.”

This planned expansion of economic clusters will need a lot of energy, hence the investment in offshore wind.

The area of ocean in which the Chaozhou municipal officials plan to site the wind farms sees steady gusts, so that they estimate that the turbines will turn between 42% and 50% of the time, which is an extraordinary statistic.

They also believe that the electricity generated by this enormous offshore wind facility will be competitive with that generated by fossil fuels like coal.

Some 62% of Chinese electricity is coal-fired, though that statistic is way down from 85% two decades ago. China says it will reach zero carbon in 2060. That is late, but Chinese officials are afraid that moving more quickly to green the grid could cause a backlash from, e.g., coal miners and workers. My guess is that the Chinese Communist Party is underestimating how quickly the economy will be greened, since this process is not serial but exponential.

Guangdong Province has a population of over 126 million, so it is roughly as populous as Mexico or Japan. It has a gross domestic product of about $2 trillion per year, similar to that of Russia or Italy. Its capital is Guangzhou, which used to be known as Canton. If you say you prefer a Cantonese to a Sichuan restaurant (i.e. mild to spicy cuisine), you are voting for the recipes of Guangzhou.

Because it has an enormous coastline, Guangdong Province has long been a cosmopolitan part of China and a key international trading node. Known for agriculture and rice cultivation in the 19th century, in recent decades it industrialized and has moved from an initial concentration on light textiles to electronics. Some two-thirds of the population of Guangdong Province is urban.