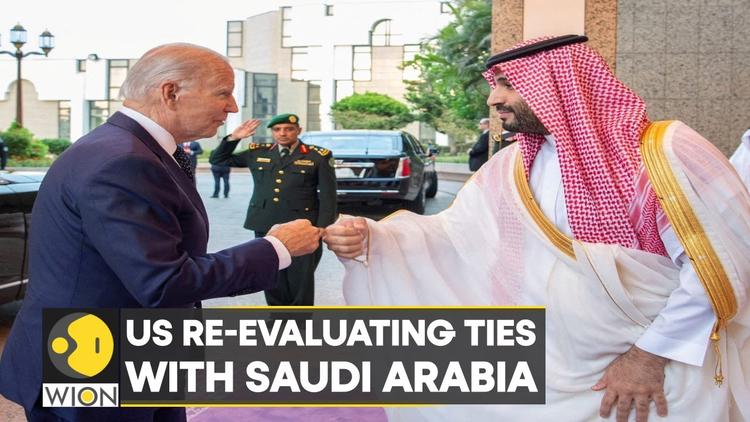 Ann Arbor (Informed Comment) – Reuters reports that the Biden White House is upset with Saudi Arabia over the recent OPEC+ decision to cut the output of the 21 nations grouped in the bloc by 2 million barrels a day. President Biden told CNN’s Jake Tapper in an interview Tuesday, “there will be consequences” for Saudi Arabia’s relationship with the U.S.

Sen. Bob Menendez (D-NJ) is also angry, and has said he will put a hold on weapons sales to Saudi Arabia in response. The OPEC+ cut guarantees higher gasoline prices going into the midterms, which hurts Democrats. It also helps Russia, an OPEC+ member, realize more earnings on every barrel of oil it manages to sell despite US and European Union sanctions, and so helps fund the war against Ukraine.

Although it would not be such a bad thing for fewer high-tech weapons to flood into the oil Gulf states, Menendez’s solution to the problem is not very satisfactory. Saudi Arabia has currency reserves plus a sovereign wealth fund that total all together $1.1 trillion, and that is apart from their regular annual oil income. So if Riyadh wants fancy weapons, it can buy them from France or the UK or Russia if the US won’t sell to the Saudis.

The correct way to take the Saudis down a notch is two-fold. One is to make a full court press to restore the 2015 Iran nuclear deal. With its current domestic problems, which derive in part from the US trade and financial blockade on Iran, the government in Tehran has reason to be more flexible. If the Democrats do well in the mid-terms, the same would be true of Biden. Bringing Iran in from the cold would put another two million barrels a day on the market in short order. Biden is also trying to take sanctions off Venezuelan production, but that country’s industry is degraded and Caracas will need time to ramp up production. Letting Iran sell its oil, as the US did before May, 2018, would completely make up for the OPEC+ cut, and maybe then some.

An Iran freely pumping oil would also hurt Russia, which would see clandestine markets dry up, and would put even more pressure on Putin to back down.

The other way to address Saudi bad pricing behavior is to push the electrification of transportation even harder. Electric cars are freedom-mobiles. Petroleum is mainly used for transportation,, and if US transportation quickly goes green, it will pull the rug out from under Riyadh and Moscow, depriving them of their ability to blackmail the world because of their energy resources. Electric cars have doubled to 6% of new car purchases in the US this year.

China and Europe are way ahead of us, which has implications for the future of the automobile industry. In China this year, battery electric vehicles were 19% of new car sales, and plug-in hybrids were another 5%, so almost a quarter of new cars were some sort of EV. In Europe, BEVs are 10% of new car purchases, and PHEVs are 9%, so nearly 20% of new cars registered in the European Economic Area are EVs.

Why did Saudi Arabia defy Biden? Global oil production is up by over 4 million barrels a day to about 100 million barrels a day this year compared to last. The extra production this summer had begun to bring down prices from a high of $120 a barrel last spring to $95 a barrel today. Before the cut was announced, prices had gone even softer, sometimes under $90 a barrel.

The Organization of Petroleum Exporting Countries was founded in 1960 by Iran, Iraq, Kuwait, Saudi Arabia and Venezuela. Its membership has fluctuated since, with some countries joining and others leaving, depending on their petroleum output and their sensitivity to prices. OPEC is a cartel, which conspires to influence prices. Its members do not control enough of the market to set prices, but they seek to smooth out the ups and downs. Primary commodity prices are a roller-coaster, which is inconvenient for producers who don’t want to be broke one year and rich as Croesus the next. How can you plan out building airports, roads and office buildings that way? Many primary commodity producers have attempted to establish such cartels at one time or another, as with tea.

OPEC+ for the past several years has grouped 11 OPEC members with 10 non-OPEC producers, including Russia, Malaysia and Mexico.

Last week OPEC+ agreed on a cut to their country quotas that would yield an over-all reduction of two million barrels a day. Given stable or rising demand, that cut in supply will cause prices to rise.

The Biden administration was all along unrealistic in hoping for a rise in Saudi or OPEC production. Analysts concluded earlier this year that the oil producing countries were already producing at their peak capacity, including Saudi Arabia, and the Saudis tried to tell the Americans that. Washington, however, chose to believe that they were just being fed a line and that there was more oil out there to be had. There wasn’t.

In the early twenty-first century, Saudi Arabia had a low-price policy, because it did not want to kick-start the electric vehicle revolution with high gasoline prices. But now, as the US, China and the EU are backing EVs strongly and the percentage of new car buys that are electric is rising quickly, that game is over. Saudi Arabia is now in a race to get as much money as possible for its petroleum before transportation is largely electrified. Crown Prince Mohammed Bin Salman wants to use the current value of petroleum to pay for a Saudi transition to a non-oil economy. He can’t do that by lowering the price of oil.

The US and Saudi Arabia are no longer on the same page about the future and how to get there. The US is going green because of the climate crisis. The Saudis are happy to wreck the planet to get the last penny of value from their stranded asset. We may as well recognize this fact and begin doing some offshore balancing by bringing Iran in from the cold.