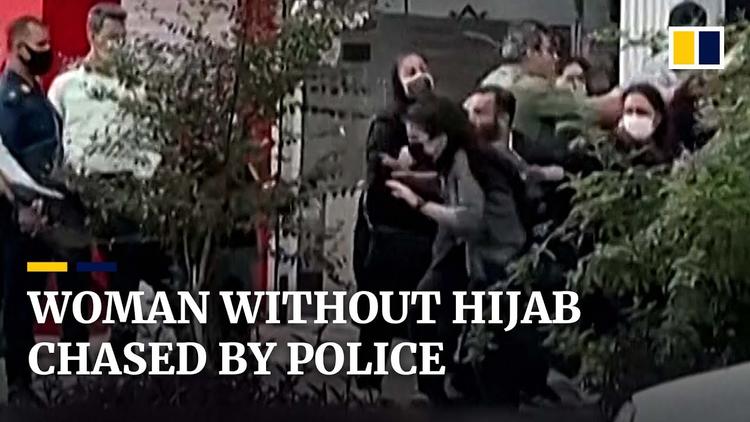 By Azin Mohajerin and Sussan Tahmasebi | –

( Globalvoices.org ) – The name Mahsa (Jina) Amini has become a rallying cry for millions of people across the world to protest the oppression of the Iranian government against its own citizens. The hashtag #MahsaAmini has broken records on social media for the number of times it has been shared, and Amini’s death has sparked a movement within Iran led by women and a young generation of Iranians raised on social media and the internet.

This protest is unique in that it is the first time that Iranians across the country, from different socio-economic backgrounds and ages, have taken to the streets around a primary demand of justice for a woman and a women’s rights issue. The protest slogan — “Woman, Life, Freedom!” — originally a Kurdish motto, which has been translated into Persian and repeated across Iran and the world — is a testament to the woman-centered and feminist nature of these protests.

Mahsa, a 22-year-old Kurdish Iranian woman visiting Tehran with her family, was hospitalized in a coma, after being arrested by “morality” police for “improper hijab.” Mahsa’s arrest and then her death on September 16 triggered widespread outrage in Iran, with many Iranian women identifying with her situation.

Niloofar Hamedi, an Iranian journalist, was one the first people to break the story. She published a picture of Mahsa in her hospital bed, tubes connecting her to life-saving machines, and a picture of her family hugging in the empty corridor of the hospital after hearing the news that she was in a coma. Both pictures went viral. Niloofar Hamedi has since been arrested and remains in custody.

Mahsa’s death especially resonated with Iranians, who shared similar experiences or fears of being arbitrarily arrested by the “morality” police. Mahsa was arrested as she exited the metro station in Tehran with her brother. According to reports, both Mahsa and her brother were beaten at the time of her arrest.

Mahsa kept pleading with the police not to arrest her because she was a stranger and didn’t know her way around the big city. This point too, and Mahsa’s innocence, has struck a chord with Iranians, especially those in the provinces, who can imagine themselves or loved ones in a similar and frightening situation. This sense of identification has contributed to the outpouring of anger at Mahsa’s killing with impunity by the “morality” police.

The protests over Mahsa’s death, and the refusal of officials to be held accountable and take responsibility for this senseless death have contributed to anger, the unleashing of grievances over the political status quo, and the demand for democracy.

Mahsa’s family resisted pressures by security forces to bury her quietly and at night. Instead, she was buried in her hometown of Saqez, Kurdistan province. The burial drew crowds, including women who removed their headscarves and chanted against the violence with which the mandatory hijab has been enforced. These scenes have since been reenacted across the country and have gone viral in Iran and around the world.

University students and women’s groups also issued calls for protests, which have persisted despite serious crackdowns and violence intent on repressing them. Women have confronted security forces without their hijabs and, in some cases, burned their headscarves. Protests have spread to at least 85 cities in the country, with women and youth at their forefront.

Repressive tactics from the regime’s playbook

Meanwhile, Iranian authorities have used their usual repressive tactics to respond to the countrywide protests. Videos on social media show security forces attacking protestors with live and pellet ammunition, tear gas, and batons. Human rights defenders, lawyers, journalists and student activists have all been arrested in large numbers. The number of rights defenders and student activists arrested is growing, making it difficult to document.

Given the women-centered nature of these protests, women human rights defenders, feminists, and student activists have especially been targeted. At least 50 women human rights defenders and over 25 female student activists have reportedly been arrested. As of October 12, nearly 200 people have been killed by the security forces since the outbreak of the most recent protests.

To prevent protesters from organizing and sharing videos of protests, internet access has been heavily disrupted and online platforms and applications, such as WhatsApp and Instagram, and even video games that involve online communications, have been blocked.

Protests have persisted despite brutal government repression. The protest slogan, the large numbers of women protesting on the street, and the protesters’ demands, which focus on bodily rights as well as political change and freedom, have garnered the world’s attention, especially that of women around the world who identify with the struggle of Iranian women against patriarchy and demand for bodily autonomy.

Women in Iran take the wheel in the fight against patriarchy

For decades, Iranian women have been advocating for gender equality, and they have used social media to ensure their acts of resistance are reflected to a broader audience. Vida Movahed stood on a utility box on Enghelab (Revolution) Street, tied her headscarf to a stick and waved it before a crowd in 2017. Her act of protest, which was captured on video and went viral on social media, became an inspiration for countless other women in the country to do the same. These women are known as “the Girls of Enghealb or Revolution Street.”

Sepiedeh Rashnoo was widely praised in July 2022 for bravely confronting a hijab enforcer on a bus. The footage of her being harassed on the bus went viral, and she was arrested soon after. State television then shamefully aired a video of her “confession,” in which her eyes appeared bruised.

Mahsa’s death is just the latest in a long line of abuses committed by the Islamic Republic against women. Of course, women’s groups have been organizing online for over a decade to raise awareness about discrimination against women and to prevent gender-based violence. Their reliance on the internet and social media, intent on building support and political momentum for gender equality in the country, has continually increased as the civic space has become increasingly restricted and closed.

Instagram, which was not blocked in the country prior to this round of protests, has long been a vital platform for feminist activists. It has been used to raise public awareness of sexual harassment and gender discrimination, as well as advocate for women’s sexual and reproductive health and rights.

Unsurprisingly, online activism is not tolerated by the Iranian government, which has worked tirelessly for decades to close and restrict all kinds of civic spaces. As a result, many human rights defenders using social media to advocate for their causes or express their ideas have faced repercussions.

At this current juncture, the Iranian government is attempting to silence the online and offline voices of women and all dissidents through a brutal and ongoing crackdown.

Much needed support from Big Tech

Fortunately, the global community can assist the Iranian people in their struggle for peaceful democratic change. First and foremost, they should call on technological companies to make their tools and services available to Iranians. These platforms and services have been blocked in recent years by U.S. sanctions, which have ironically abetted the Iranian government’s online censorship drive by pushing Iranians to use insecure domestic platforms.

However, a new license issued by the United States Treasury Department clarifying existing sanctions exemptions has put the ball in the court of companies such as Google, Meta and Apple, permitting them to provide their communications tools to Iranians.

The response from some tech companies has been slow. For example, Iranians with iPhones are still unable to download badly needed VPNs from Apple Store, which would allow them to access the internet during these critical times. While the government and the U.S. treasury are responsible for ensuring that tech companies understand the licenses that allow them to provide internet technology to Iranians, tech companies should also play a proactive role in this respect.

Freedom seekers from around the world should also let the Iranian people know they are not alone. Solidarity, whether in the form of statements from the UN or other international bodies and non-governmental organizations, would be greatly welcomed by activists facing repression from the Islamic Republic. Ultimately, change in Iran can only come from sustained grassroots-led movements, but the international community can help ensure that Iranian authorities are held to account for their actions and rights violations.