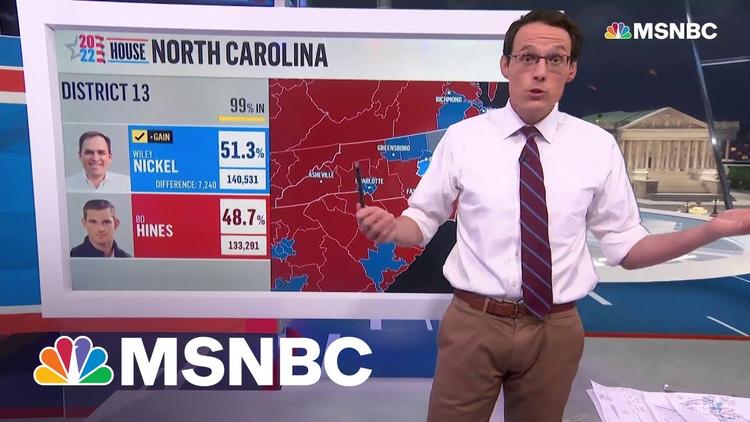 Ann Arbor (Informed Comment) – Over the past 40 years, midterm elections have typically been quiet affairs in which only 38% to 40% of voters show up at the polls, and those who vote skew toward the older, wealthier and whiter spectrum of the electorate. In contrast, in presidential election years, the turnout tends to be between 58% and 66% (in 2020).

The 2022 midterms, however, looked more like a presidential election, following on the unusual turnout in the 2018 midterms of 53%. Yesterday’s tally will rival that one and likely exceed it.

As of the early hours of Wednesday, control of the House of Representatives was considered too close to call by NBC news, which did admit a tilt toward Republican control. Steve Kornacki at NBC pointed out, however, that Democrats have picked up some seats, though not as many as Republicans had, and that the California tally could still allow the Democrats to keep the House. The control of the Senate was equally impossible to predict early Wednesday morning, with the win of John Fetterman in Pennsylvania keeping Dem hopes alive. That such a possibility still existed, if a little unlikely, at that advanced hour flew in the face of historical expectations. With President Joe Biden at a 44% approval rating and facing his first midterm, past trends would have predicted a huge Republican wave such as swamped Bill Clinton in 1994 or Barack Obama in 2010.

That did not happen. Biden is doing historically well in these midterms.

How to explain the rush to the polls and the respectable defense the Democrats put up in both houses of Congress, whatever the ultimate result?

The Jan. 6 Insurrection cast a long shadow over this midterm, with prominent Republicans taking a Trumpian position in favor of election denial. There is reason to believe that the public had a great deal of concern about the future of democracy were Trump’s Republican Party to dominate the outcome heavily.

It is also possible that the Dobbs Supreme Court decision striking down a woman’s right to full health care while pregnant impelled many women to vote, and to vote Democratic. This consideration was less prominent in a lot of pre-election polls and exit polls, but there are lots of possible explanations for the disparity. If asked their top concern, women may have said inflation and the economy, but there may not have been a follow-up question about their second biggest concern, which may have been Dobbs. In Michigan I think Tudor Dixon’s stance opposing abortion under any circumstances hurt her and allowed Governor Gretchen Whitmer to win a second term.

Stella Rouse and Shibley Telhami at the University of Maryland warned that their polling was picking up significant concern over abortion and the fate of democracy in addition to the economy.

One consideration is that favorable/unfavorable numbers for a president in polling do not now mean what they did 20 years ago. In 1996, 56% of voters said they viewed Bill Clinton favorably, but 53% viewed Bob Dole favorably, too. Those results would have been impossible unless at least some members of each party though well of the standard bearer of the other.

In 2022, Biden’s 44% favorability rating is ahead of Donald Trump’s 39.9% favorability rating. This result is an index of the severe polarization of the country. Members of each of the two major parties are simply unwilling to concede that there is anything good about the leader of the rival party. American politics have long been treated by most people here, including the press, like a sports competition. In the old days, perhaps it was mostly like a tennis match, where each of the two players can be respected, and the loser leaps over the net to shake hands with the victor — all very genteel. Now our politics is a hockey match, with a lot of dirty tactics and a full-throated hatred for the other team. A majority of hockey fans actually oppose a ban on fighting among the players.

So Biden would likely be just as popular as Clinton was in a less polarized electorate.

Just as the 2018 Blue Wave reflected public anxiety about the antics of the erratic and flawed Trump, so those anxieties still likely drove Democratic voters to the polls in record numbers in 2022.

Trump, moreover, lost these midterms decisively. With the exception of the shockingly bad author J.D. Vance in Ohio, Trump’s prominent personal picks did not appear to be faring very well on election day, and while things may change slightly, this conclusion is unlikely to be altered.