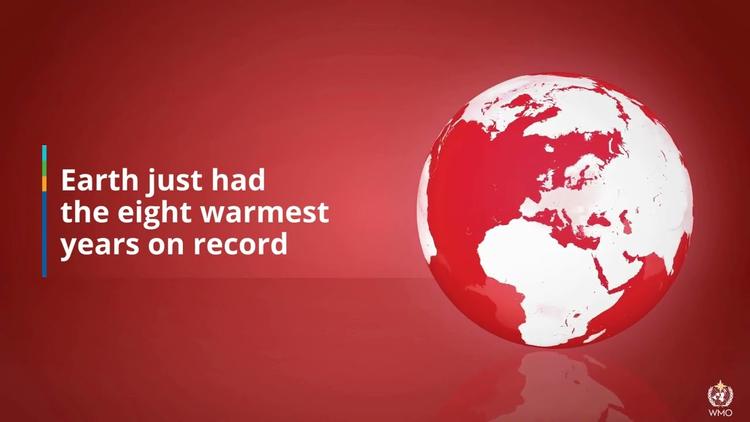 Ann Arbor (Informed Comment) – The past eight years have been the eight hottest on record, in further evidence that human-caused global heating is accelerating rapidly and dangerously. So reports the World Meteorological Organization in tandem with the COP27 Climate Summit in Sharm El Sheikh, Egypt.

The report argues that we can see rapid heating both in the climate disasters that have struck earth over the past year and in the statistics for ice lost, sea level rise, and the heating of the oceans’ surface water.

As for the climate disasters, Informed Comment has reported on some of them.

For instance, we had the massive rains in Pakistan in August and September that left a third of the country underwater and created a temporary new sea, 67 miles across, that won’t drain for six months. 33 million Pakistanis have been affected and nearly 8 million have been displaced. Severe heat in July had set up a low pressure zone in the Arabian Sea that produced water-heavy clouds that dumped their water on Pakistan. The economic losses are over $15 billion.

Both China and the American Southwest have been thrown into long-term droughts, leaving famous rivers frighteningly low.

WMO Secretary-General Petteri Taalas lamented that “We have such high levels of carbon dioxide in the atmosphere now that the lower 1.5°C of the Paris Agreement is barely within reach.”

This year, parts per million of carbon dioxide in the atmosphere reached 418, compared to the 260-270 that had been common in the Holocene, the era of the past 10,000 years. By burning coal, petroleum and fossil gas, human beings are rapidly changing the face of the earth in a way that only big asteroids and massive volcano eruptions did in the past. Professor Taalas is saying that there is so much carbon dioxide being put into the atmosphere annually still, with 36 billion tons having been spewed up there last year alone, that keeping extra heating above preindustrial norms to 1.5° C. (2.7° F.) is becoming less and less likely. Climate scientists are worried that if we heat the earth more than that, some weather systems will become chaotic and advanced technological civilization will be difficult to retain.

Consistent worldwide temperature records only go back to the nineteenth century, but ice cores and marine life skeletons indicate that the earth is not only hotter than at any time in the past century and a half, it is hotter than it has been in millions of years.

The WMO notes that the signs of the climate emergency are clearly visible. For instance, the rate of sea level rise, caused by the melting of ice on land and by the bloating of sea water caused by warmer water temperatures, has doubled just since 1993. Just since January 2020, the average global rise in sea level was 10 millimeters.

The Greenland ice sheet and glaciers in the Alps are melting with increasing rapidity. Greenland is warming up so much that it rained there in September rather than snowing. Both the Arctic and the Antarctic lost a million and a million-and-a-half square kilometers of sea-ice extent, respectively.

As for the Alps, their glaciers lost 3 to 4 yards of ice thickness so far in 2022, beating a record set in 2003. Just in one year, 2021, 6% of the glacier ice volume evaporated in Switzerland. This past summer no new snow lasted into the fall, meaning that there was no building up of fresh ice. Just in this century, the volume of glacier ice in Switzerland has shrunk from 77 to 49 cubed kilometers, so there is fully a third less ice than there was in 2020.

Turning to the oceans, over half of their surface suffered through at least one marine heatwave this year. Cold waves, in contrast, are declining, with only 22% of the oceans’ surface being affected by cold waves this year.