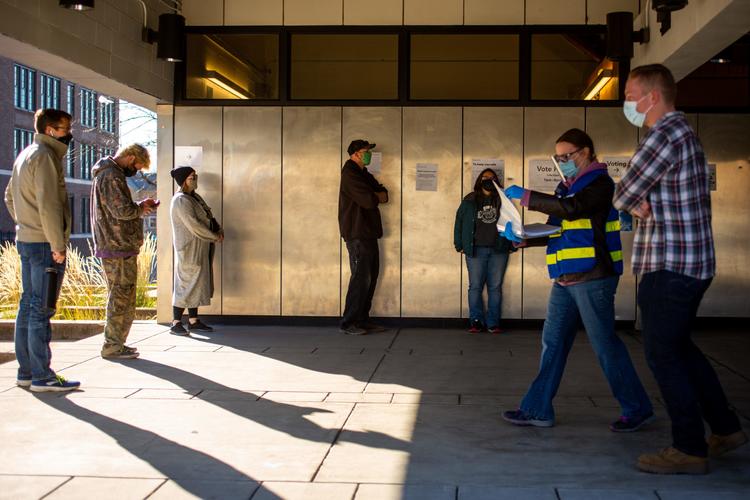 The Minnesota Reformer BUFFALO — A flag hanging from a telephone pole marked the turnoff to the Land of Promise.

It was unseasonably warm for late October, but three dozen Minnesotans chose to spend their Saturday here, at a church on the north side of Beebe Lake.

Inside a building, church mixed with politics. At the front of the room an American flag was draped over a pulpit, next to which the Rev. Dale Witherington led the day-long retreat, donning a black and white T-shirt that said “I am not one of the sheep.”

Witherington is leader of Restore Minnesota, a ministry that aims to “restore righteousness in Minnesota through spiritual and civic transformation based on the gospel of Jesus Christ.”

He was leading a workshop for “community action teams” that are committed to stamping out the voter fraud they are certain caused Republicans to lose the presidency in 2020, even if prominent Republicans like William Barr and a bevy of Republican-appointed judges don’t agree.

“Lord we know that for most of these folks — and especially right now coming up to election — for most of these folks it is geared on government and politics,” he said. “We know it’s so much more than that. But that’s at the heart of what’s going on in our nation. And if any part of our culture right now needs a fresh breath of God, it is our federal, state and local governments.”

Witherington is a state chaplain, leading Bible studies and providing “spiritual counsel” to lawmakers. He is also state director of the Minnesota Prayer Caucus, an affiliate of the Congressional Prayer Caucus Foundation, a nonprofit that defends Judeo-Christian faith and prayer in government. He did not respond to a request for comments.

He opposes abortion and LGBTQ rights and has said there’s no line between church and state. And he’s been working hand-in-hand with the state Republican Party. He and Lukas Severson, Minnesota “election integrity director” for the Republican National Committee, have held multiple trainings for election judges, which is what Minnesota calls party-nominated people who work at the polls. Witherington says they teach the poll workers “what to look for” during the election.

He’s also on a weekly call with a national group led by Cleta Mitchell, a Republican election lawyer who tried to help former President Donald Trump flip the Georgia election results in 2020.

Republicans have long relied on the religious right as foot soldiers, and now conservative Christians have been put to work on the GOP’s latest political push — scrutinizing election administration and putting more of their own in polling places on Election Day. They say they’re merely restoring trust in elections. Democrats and experts in election administration say that dangerously flirts with intimidation of election judges and volunteers who make up the massive, decentralized system of American elections.

Polls show white evangelical Christians have been Trump’s staunchest supporters after he helped deliver their long-sought reversal of Roe v. Wade and seemed to relish in culture war fights with the nation’s coastal elites. Many believe him when he says the election was stolen — contrary to all evidence. And they’re willing to step forward and do whatever it takes to make sure that doesn’t happen again.

‘Going into the heart of the beast’ — Minneapolis

In an Oct. 24 Zoom training obtained by the Reformer, Severson of the RNC said his focus was recruiting “poll challengers” — commonly called poll watchers in other states — to monitor polling sites on Election Day and report fraud or suspicious activities.

The Republican Party wasn’t allowed to use poll watchers for decades after a lawsuit and consent decree following intimidating tactics in the 1981 New Jersey governor’s race — such as stationing off-duty cops at polling places in minority neighborhoods. The consent decree was lifted in 2017, and the party is now rebuilding its poll watching operation, focusing on key states, Severson said on the call.

The RNC built “one of the largest, well-trained election integrity operations” in its history to restore faith in elections after 2020, he said.

Severson told participants he’s focused on getting poll challengers in the 1st and 2nd congressional districts — the state’s most competitive, in southern Minnesota and the east and south metro, respectively.

Election judges are nominated by the political parties, but in heavily Democratic or Republican areas, parties struggle to get enough poll workers, so Severson wants to get poll challengers in those places.

He referred questions from the Reformer to a GOP spokeswoman, who did not answer them.

Republican strategist Jonathan Aanestad told people on the Zoom to report any problems to the party rather than arguing with election workers, because election workers might call the police if anyone is disruptive, and “We don’t want a black eye in the press.”

Aanestad founded Minnesota Election Integrity Solutions, a nonprofit that he says has recruited and trained numerous election judges. He said on the Zoom they’ve been recruiting election judges since the spring of 2021, and are “well covered” except in the 4th and 5th congressional districts (St. Paul and Minneapolis, respectively).

Aanestad said research by Rick Weible — whom he said is “head of our forensics team” — keeps leading back to the Twin Cities.

“We think that’s where the problems are,” Aanestad said.

Weible is the former mayor of St. Bonifacius who has been traveling the state, posting YouTube videos falsely claiming election fraud and pushing for changes to election procedures, hardware and software.

(In a Friday interview, Aanestad distanced himself from Weible, saying now he only consults for his group.)

Witherington, the minister, mentioned that he would be working as a poll worker in Minneapolis.

“You’re going into the heart of the beast huh Dale?” Aanestad said.

“I’m ready to do that,” Witherington replied.

Aanestad said in the interview that he was being flippant about Witherington arming himself but said it’s been difficult to get election judges to staff Minneapolis precincts because of perceptions of crime.

Aanestad boasted on the Zoom about convincing numerous county boards to scuttle ballot drop boxes after lobbying in 25 counties.

Then he said drop boxes will be “all over Minneapolis,” despite their best efforts.

(Minneapolis has never had unstaffed ballot drop boxes, only staffed dropoff sites. Drop boxes are one of many bogeymen among election conspiracy theorists, and eliminating them is part of a nationwide push to make it harder to vote.)

In an interview, Aanestad said he was referring to ballot dropoff sites.

He said his group’s work is separate from the RNC push, noting his is a 501(c)(3) organization. That type of nonprofit risks losing its tax-exempt status if it engages in political activity or endorses candidates.

While he’s worked with the Republicans on the Zoom call, he said, “We don’t align with any of them.”

‘We are not just a bunch of Christians doing political stuff’

In addition to training people to work the polls, Witherington has been rubbing shoulders with Republican candidates.

Witherington appeared with GOP nominee for governor Scott Jensen after a teacher licensing hearing, and with secretary of state nominee Kim Crockett at a mid-October “freedom rally” sponsored by the “Minnesota Election Protection Team.”

At the request of Severson, Witherington recently was recently recruiting 15 to 20 volunteers to work in the GOP “war room” on Election Day, to receive “incident report” calls from election judges across the state.

Witherington said while serving as state chaplain — in which he’s supposed to be nonpartisan — on the last night of the 2013 legislative session, three bills caught his attention — they dealt with same-sex marriage, a tax increase and unionizing in-home child care, he said on a podcast in August.

“They were attacks against the family,” he said.

While he prefaced his podcast comments by saying, “I don’t come here as Republican or Democrat,” he went on to say the Democratic Party has been “the socialist party,” called the teachers’ union “evil,” and said Democrats “don’t care about the constitution.”

And he intends to help flip it.

At the Buffalo retreat, Witherington said he first had a “vision” in 2013, but it wasn’t until the riots over George Floyd’s Minneapolis police killing that his vision began to come to fruition in Brainerd, with a group of “Christian, constitutional conservatives.”

He found fertile ground: Right-wing activists have been hounding Crow Wing County officials for about a year with voter fraud claims, echoing Trump and his allies’ false claims that election fraud is rampant — even though Trump won the county by 30 points in 2020.

The Brainerd meeting grew into 11 “community action teams,” with a goal of eventually having one in all 87 counties, and perhaps expanding it nationwide, Witherington told the group. He said they had an event that week with right-wing celebrity Charlie Kirk, who founded the youth organization Turning Point USA and has gained notoriety for spreading false claims about the COVID-19 pandemic, climate change and voter fraud.

Restore Minnesota is “primarily an educational ministry,” he said.

“We are not just a bunch of Christians doing political stuff and throwing the name Christian on the site just so we make it look good,” Witherington said. “We are being driven to change our culture by the gospel of Jesus Christ, and that includes every sphere of our culture, including governors.”

He has little to fear in making such statements.

In one of the rare cases in which the IRS audited a church — a Minnesota church that supported former U.S. Rep. Michele Bachmann — a federal judge ended up dismissing the case, ProPublica recently reported. After that, the IRS suspended investigations into churches’ political activity for five years.

Deena Winter has covered local and state government in four states over the past three decades, with stints at the Bismarck Tribune in North Dakota, as a correspondent for the Denver Post, city hall reporter in Lincoln, Nebraska, and regional editor for Southwest News in the western Minneapolis suburbs. Before joining the staff of the Reformer in 2021 she was a contributor to the Wall Street Journal and the New York Times. She and her husband have a daughter, son, and very grand child. In her spare time, she likes to play tennis, jog, garden and attempt to check out all the best restaurants in the metro area.

Via The Minnesota Reformer