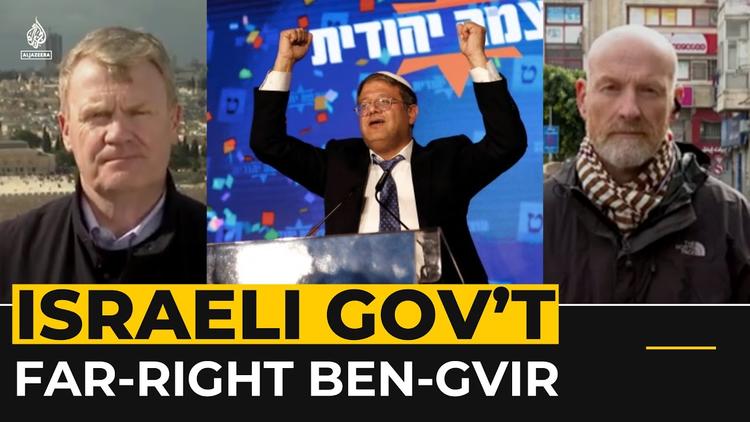 Ann Arbor (Informed Comment) – The Israeli newspaper Arab 48 reports that the Likud Party of Prime Minister Binyamin Netanyahu signed a deal on Friday with what the paper calls the “fascist” Jewish Power party of Itamar Ben-Gvir giving the latter the post of minister of national security. Jewish Power will also get the ministry of heritage, which oversees religious sites, including, potentially, Palestinian ones or those shared with Palestinians. It was also given the ministry of the Negev and Galilee, which, according to BBC Monitoring, “regulates settlement expansion” in the West Bank.

There had previously been a minister of public security overseeing the police, but the post will now be expanded. Arab 48 says that the agreement gives Ben-Gvir and his party centralized control of several law enforcement agencies that had previously been distributed among several ministries. It also creates a new “national guard” force with a wide mandate, which sounds pretty ominous. Ben-Gvir will have authority over Israeli border police, including those in the Palestinian West Bank. He had earlier called for relaxed rules of engagement under which Israeli security forces could use lethal force against Palestinians without let or hindrance.

The paper quotes an Israeli official in law enforcement as saying in response, “This matter will turn the border patrol in the West Bank into Ben-Gvir’s private police force in the (Occupied) Territories.”

The Palestinian West Bank, under the Israeli jackboot, is already a seething cauldron and is experiencing a low-intensity civil war. Some Palestinians among youth in Jenin have turned to guerrilla violence, while Israeli squatters on Palestinian land are launching increasing numbers of attacks on Palestinians, as the Israeli army either looks on or actively helps. This situation will worsen considerably under Ben-Gvir.

The Ministry of the Negev and Galilee will, moreover, gain control of wells in the Palestinian West Bank. Palestinians’ wells often go dry because Israeli squatters dig deep and lower the level of the aquifer.

This step is surreal, since the antecedents of Jewish Power have at times been on the US State Department list of terrorist organizations. Ben-Gvir has been convicted of hate speech and incitement to violence. It is as though Trump had appointed a Grand Wizard of the Ku Klux Klan as the head of Homeland Security or of Customs and Border Protection.

Secretary of State Antony Blinken lobbied the new government intensively not to give the Israeli ultra-far right security ministries that would make US security cooperation with Israel more difficult.

Arab 48 suggests that Netanyahu handed out a handful of ministries to Jewish Power as a way of pressuring Bezalel Smotrich’s Religious Zionist Party also to make deals for ministries quickly, lest it lose out on the desirable ones.

Ben-Gvir called for “all right-wing blocs to form a completely right-wing government as quickly as possible.” Otherwise, he warned, Yair Lapid and Benny Gantz may rule Israel again. Lapid and Gantz headed a center-right government that fell in July, and which Ben-Gvir characterizes as “left-wing.” There isn’t really much of what you might call, you know, “left-wing” politics left in Israel.

Ben-Gvir added, “We have this evening taken an important step toward forming a completely right-wing government.”

He said security would be returned to the streets, to the Negev and Galilee (both of which have large populations of Palestinian-Israelis). “I am gladdened,” he added, “that the agreement on the ministries that Jewish Power will garner will allow us to implement the undertakings we made during the election on security, and strengthening Negev and the Galilee, and areas outside central Israel.”

Both Ben-Gvir and Smotrich have advocated changing Israeli law so that sitting members of parliament cannot be tried. This step would be a way of protecting Netanyahu, who is on trial for corruption, from prosecution. Netanyahu is the one who got them to run on the same ticket so that they could get enough votes to pass the 5% threshold and be seated in parliament. Netanyahu is the enabler of fascism in its Israeli guise.