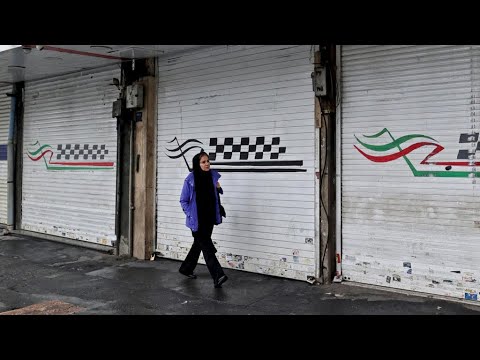 Ann Arbor (Informed Comment) – Protesters in Iran, including political prisoners had called for three days of national strikes beginning Sunday, and if reports and videos posted to social media can be believed, there was substantial buy-in to the strike, as shopkeepers closed their establishments and workers in key industries stayed home. So report Patrick Wintour and Maryam Foumani at The Guardian.

BBC Monitoring concluded after reviewing the relevant postings and videos that strikes were launched in 23 of Iran’s 31 provinces. Monday also saw a string of small demonstrations in various parts of Tehran and some 14 cities around the country.

Although major Persian cities saw strikes and rallies, the strike seems to have been especially effective in Iranian Kurdistan, where Hengaw reported that 29 cities in four Kurdish provinces were on strike. Mahsa “Zhina” Amini, the young woman whose death in the custody of the morals police provoked this fall’s demonstrations, was a Kurdish Iranian.

BBC Monitoring notes that in Isfahan, the country’s third most populous city and an important trade and industrial center, the workers at the Diziche Cement Co. staged a walk-out and gathered in the street, according to video posted at Telegram.

Likewise, Atena Daemi tweeted, “Today, Azar 14, in addition to the strike of marketers and businessmen in more than 40 cities, the contract workers of the Mahshahr Petrochemical Terminals and Tanks Company are also on strike for the second day.”

Mahshahr is a Gulf port city in the southern Khuzistan Province. It was the site of a regime massacre of protesters against high fuel costs in 2019.

This is not the first time we’ve see workers in the hydrocarbon industries strike in sympathy with the wave of protests led by young women this fall, but it is always significant in a country like Iran, where those industries are central to funding the state, when they do strike.

BBC Monitoring also notes that truck drivers, who had begun a ten-day strike, were still out on a work stoppage on Sunday and Monday, which overlapped with days 9 and 10 of their ongoing strike.

Truck driver strikes are particularly damaging to an economy, and have been used effectively by French workers, for instance, to obstruct any Neoliberal move toward cutting benefits or salaries for workers. They are likely to be just as effective in Iran, and alongside petrochemical workers, the truck drivers are probably among the best allies the demonstrators could have.

If it is true, moreover, that large numbers of shopkeepers joined in, that is another reason for the Iranian government to fear the staying power of these protests.

The announcement by Iran’s attorney general that the country would abolish the morals police may have been a trial balloon to see whether this step would help tamp down the protests. There is no evidence of the morals police having actually been decommissioned.