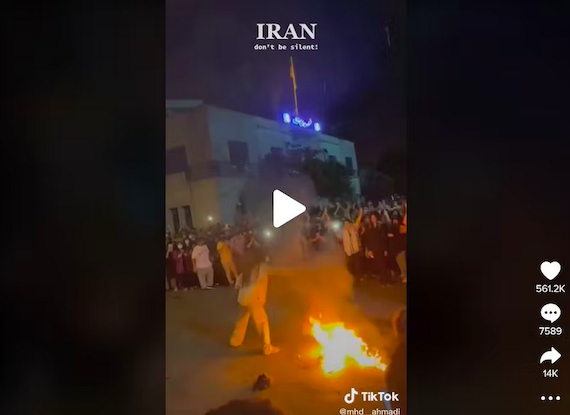 By Whitney Shylee May, The University of Texas at Austin College of Liberal Arts | –

Images of the protests that followed the death of 22-year-old Mahsa Zhina Amini on Sept. 16, 2022, in Iran and reports of the government’s brutal crackdown have circulated widely on social media. This flow of information comes despite efforts by the Iranian regime to throttle internet access and censor information leaving the country.

One effective method the protesters have hit on has been to use TikTok, the video-sharing app better known for young people posting clips of themselves singing and dancing. The way video clips are shared on the social media platform and the protesters’ clever use of labeling have helped activists circumvent the information blockade of Iran’s tech-savvy security services and reach a wide audience.

As a researcher who studies young people and participatory culture – art and information produced by nonspecialists, including fan fiction and citizen journalism – I believe that TikTok is proving to be an effective tool of political activism in the face of severe repression.

Key to its effectiveness is how TikTok works. Each TikTok video recorded by the user is typically 60 seconds or shorter and loops when finished. Other users can edit or “stitch” someone else’s TikTok video into their own. Users can also create a split screen or “duet” TikTok video, with the original video on one side of the screen and their own on the other.

To use TikTok, a protester in Iran typically uses multihop virtual private networks, meaning VPNs that send internet traffic through multiple servers, to route around government internet blackouts just long enough to post a video to TikTok. There, TikTok users who support the protester “like” the video thousands of times, stitch it into other videos, and duet it to then be liked, stitched and duetted again and again.

In the process, identifying information about the original poster is obscured. Within minutes the protester becomes anonymous even as the message spreads. Even if the video is flagged for violating TikTok’s community guidelines, its sharers like and incorporate its duets too quickly for TikTok to remove the original content from the platform completely.

In one video that has received over 620,000 views, Iranian-American attorney Elica Le Bon urges viewers to share all Iranian content to make sure the world keeps paying attention. In another, TikTok user @gal_lynette directs her 35,000 followers to instantly duet videos made by Iranian women as a form of citizen journalism to “keep their reporting – their story … alive.”

Gaming TikTok’s algorithm helps ensure that the people most likely to share this content can find it. For example, Iranian-American TikTokker Yeganeh Mafaher tapped a recent celebrity scandal’s virality by titling a video “Adam Levine Also DMd Me,” only to announce “Okay, now that I have your attention, the internet is going to be cut off in Ir@n.”

By removing the word “Iran” but leaving Levine’s name searchable, Yeganeh was gaming the algorithm to help her retain her viewers who were seeking Iranian content while also “hashbaiting” additional users who were following the celebrity scandal. Up to that point, Yeganeh’s most-viewed revolution-related video was a history of hijab laws that garnered nearly 341,000 views. The Levine video exceeded 1.6 million.

Yeganeh’s account had previously recorded her experiences as an Iranian-American citizen and attracted followers interested in Iranian culture. After Amini’s death, she credited her followers with boosting her account to the point that she was interviewed by cable news host Chris Cuomo on NewsNation to discuss the uprising.

Song of a movement

A key element of a TikTok video is its audio track or “sound,” often a song that provides a thematic thread across stitched and duetted videos. The sound of many of the videos depicting the events in Iran, with more than 11.7 million views, is the song “Baraye” by Iranian singer-songwriter Shervin Hajipour.

The song’s lyrics are derived from a string of Farsi tweets that detail Iranians’ reasons for revolution. Hajipour was detained because of the song but was later released. “Baraye” has since become a global protest ballad.

Worried for Hajipour’s safety, TikTokkers supporting the uprising united in an effort to shield him from backlash by posting thousands of videos directing users to nominate “Baraye” for the Grammy’s newest special merits award, best song for social change. In October, the song had received 83% of the 115,000 nominations, which has increased international attention on Hajipour and the song.

“Baraye” and related hashtags are shared resources that help make TikTok a platform for participatory politics. As the world watches Iran, TikTokkers game the platform’s algorithms to amplify Iranians’ videos beyond the reach of the Iranian government.

There are active TikTok campaigns for everything from Grammy nominations to scripting emails to local representatives and global leaders. Videos teach laypeople to discreetly host Iranian web traffic and direct users to local protests. They share petitions for G-7 leaders to expel Iran’s diplomats and the U.N. to hold the Iranian government accountable for its crimes against international law. As state executions of protesters have begun in Iran, the #StopExecutionsInIran campaign has clocked over 100 million views on TikTok.

These interactive tools and the platform’s algorithm for promoting content are what transformed TikTok from teen dance app to powerful global platform for protest and political action. While much is uncertain as Iranians fight for change and their supporters worldwide flood an unlikely platform to boost their voices, one thing seems likely: The revolution may not be televised, but it will be liked, stitched and duetted.

Whitney Shylee May, Ph.D. candidate in American Studies, The University of Texas at Austin College of Liberal Arts