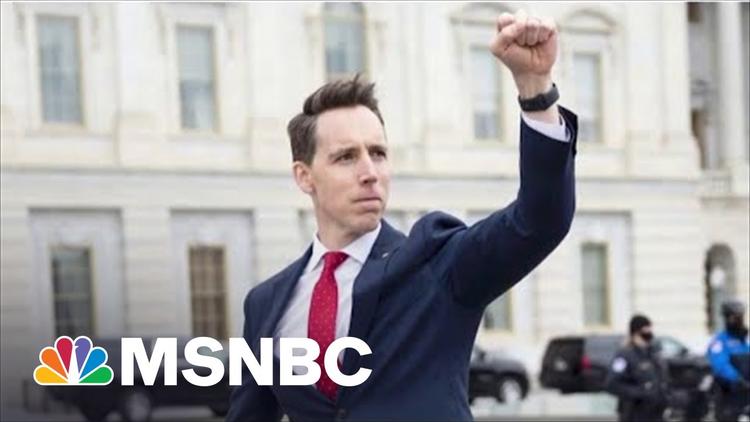 Reprinted in commemoration of Brian Sicknick and other victims of the Jan. 6 Capitol insurrection.

Ann Arbor (Informed Comment) – The damning Jan. 6 public hearings revealed a plethora of historical detail, but they also shed light on character. Some of these revelations were profiles in pusillanimity.

Sen. Josh Hawley (R-MO), one of the slimiest creatures ever to crawl into the halls of America’s legislature, gloried in a raised fist toward the assembled fascist hordes of the far right summoned by the lunatic-in-chief. A member of the DC police told the committee that she found the gesture deeply offensive, more especially since Hawley thought himself safe in the halls of Congress after having riled up a crowd she had to face (and which gave Officer Brian Sicknick two fatal strokes after nearly crushing him to death in a doorway to the Capitol– while injuring 146 other policemen).

When the crowd he had helped instigate invaded his supposedly safe space, did Hawley greet them with another raised fist? Did he join them in their mission?

He lit out like a craven poltroon, whose frantic flight is impossible to watch without a melancholy hilarity. The mirth wells up from the Warner Brothers cartoon-like reversal that led to his frenzied retreat, the melancholy from watching a benighted fool to whom the misguided people of Missouri had unwisely entrusted their fates.

I propose that we alter the American idiom “to haul ass” from now on, substituting “to hawley ass.”

Trump himself, having lit the fuse, allowed himself to be squirreled away back at the Fox News situation room in the White House, rather than leading the crowd, as he had promised to do. One does not lead from a vehicle, and Trump knew his Secret Service agents would never let him be driven into the midst of a mob, so whatever drama he staged was a mere matter of protesting too much. He could have gone to the Capitol if he had really wanted too. He was still the most powerful man in the world. He chose to let his useful idiots take the heat, and has not gone to visit any of them in jail after they were quite rightly convicted of every crime from seditious conspiracy to trespassing.

There were the Republican members of Congress, who, having been spirited away into tunnels and undisclosed locations, fleeing with all the alacrity of a panic-stricken hawleyism from the QAnon Shaman and other assorted gun nuts, turned around and voted to overthrow the US government by refusing to certify Joe Biden’s win, and ever after suffered the vapors, wrist to pasty forehead, at the very thought of censuring the Apricot Adolf.

Then, take Steve Bannon– please! Here is a blowhard who urged on Trump and the insurrectionists and blew off a subpoena from the Jan. 6 committee. When he was indicted and faced a courtroom, he thundered, as Jose Paglieri points out at the Daily Beast, that he would make the trial “the misdemeanor of hell.” In the event, he did did not take the stand to denounce the perfidious proceedings for his three-sheets-to the-wind geriatric YouTube audience. He did not have his attorneys even put on a defense, and skipped attending himself, too bashful to withstand the stern gaze of the judge. T.S. Eliot in The Hollow Men, observed, “This is the way the world ends, not with a bang but a whimper.” Eliot was haunted by the figure of Kurtz in Joseph Conrad’s novel of the European colonial rape of the Congo, The Heart of Darkness. The Hollow Men of the black shirt Trump insurgency have also dwindled from a roar at their predation upon the nation to the mewling of broken clowns hawking snake oil at a brigade of gullible washouts. The horror, the horror, indeed.

The gallery of the yellow-bellied goes on, including Mitch McConnell and Kevin McCarthy, who briefly found their cojones somehow with a flashlight under the covers after four years of suffering from cryptorchidism, and managed to at least protest that Trump had nearly succeeded in having them lynched. After this momentary brush with manhood, they quickly turned choirboy in the church of Trump, praising him and seeking his approval, for all the world as though the Munich city elders had sucked up to Hitler after the failed beer-hall putsch.

Most Republican senators refused even to meet with Brian Sicknick’s mother Gladys when she lobbied them to form a commission to investigate Jan. 6. Even the dozen, out of 50, GOP senators who did meet with her voted against the commission. If it hadn’t been for the courage of Liz Cheney and Adam Kinzinger, with whom I likely agree on very little else, in joining Nancy Pelosi’s Jan. 6 Special Committee, the entire exercise could have been dismissed as Democrat (that’s what they call them) partisanship.

Much of the Republican Party has been reduced to quivering protoplasm, whimpering under the lash of Trump’s whiny invective, alternating between morbid algolagnia and contemptible dastardliness.