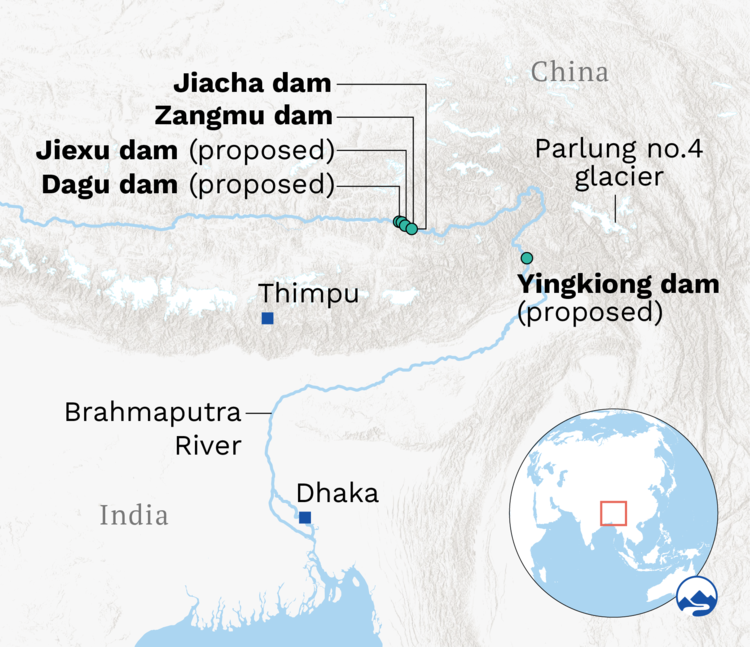 ( Third Pole ) – As glaciers shrink and monsoon rainfall becomes more unpredictable due to climate change, uncertainty around the viability of hydropower projects in the Hindu Kush Himalayas is increasing. A recent study on the state of a glacier on the southeastern Tibetan Plateau raises questions about the region’s long-term water supply and the risk of flooding from more meltwater run-off, with implications for the many dams planned in the Yarlung Tsangpo-Brahmaputra river basin.

The worsening condition of the Parlung No. 4 glacier is causing concern over water supply, flood risk and the viability of hydropower, a key part of both countries’ plans to become carbon neutral.

The Hindu Kush Himalayan region is warming at almost double the global average rate: 0.32 degrees Celsius per decade versus 0.16C. The study, published in September, found that in the past 20 years this warming has intensified at the Parlung No. 4 glacier, a medium-sized glacier that can be used as a benchmark to track changes in snow and rainfall patterns, and the subsequent shrinking of glaciers, in the area.

Temperatures at Parlung No. 4 have shot up by 0.39C per decade since 1990. “It’s snowing less and raining more instead here,” says Achille Jouberton, one of the lead authors of the study, which was conducted by a team of European and Chinese researchers.

Jouberton tells The Third Pole that between 1975 and 2019, the glacier’s snout, or terminus, retreated by about half a kilometre. On average, the glacier shrank by 0.32 metres water equivalent a year over this period, the researchers found. Since 2000, snowfall during the monsoon at the glacier has declined by 26%.

Glacier mass balance is the change in the mass of a glacier or body of ice, over a period of time. It is the total sum of everything that is accumulated in snow, ice and freezing rain, and lost from melting and sublimation.

The mass balance of a glacier is measured in metres water equivalent. This represents the volume of water from melting all the glacier’s snow and ice, and is calculated by dividing the glacier’s volume by its surface area.

“The study uses data from the glacier’s surface that is more accurate than the satellite data sets used by many studies. Surface data explains the phenomenon that is shrinking these glaciers and its most likely impact on the Yarlung Tsangpo River in China and Brahmaputra in India,” Jouberton says.

Rivers originating from Hindu Kush Himalayan glaciers are a significant source of water and energy in 10 countries, including China, India, Pakistan and Nepal. Hydropower generated from these rivers is an important part of many countries’ ambitions to become carbon neutral.

The Tibetan Plateau’s glaciers feed a major, 2,880km, river system. The Yarlung Tsangpo, which originates here, runs from this high elevation, with a heavy load of fertile soil, through India as the Brahmaputra and then into Bangladesh as the Jamuna.

China and India are the largest hydropower producers in Asia, but the former dwarfs the latter. In 2021, China generated around 1,300 terawatt hours of electricity from hydropower and India one-tenth of that.

When it comes to hydropower projects, a lot needs to change in High Mountain Asia

Both countries plan to become carbon neutral – China by 2060 and India by 2070. Even though hydropower’s low-carbon credentials have been called into question, it is still a substantial component of both countries’ renewable energy mixes.

According to a model developed by China’s National Development and Reform Commission, to achieve carbon neutrality the country’s electricity production will double to 14,800 terawatt hours by 2050, of which 14% will be generated from hydropower. India, meanwhile, has the largest hydropower pipeline in the world. By 2032, it plans to grow its current 52 gigawatts of hydropower capacity by nearly 200% with the addition of projects with a combined capacity of 91GW.

Thus, for both countries, harnessing the energy of the Yarlung Tsangpo-Brahmaputra is very important. This started to ramp up in 2010, with the construction of the 7.9 billion yuan (USD 1.2 billion), 510 MW Zangmu hydroelectric power station, which became operational in 2015. 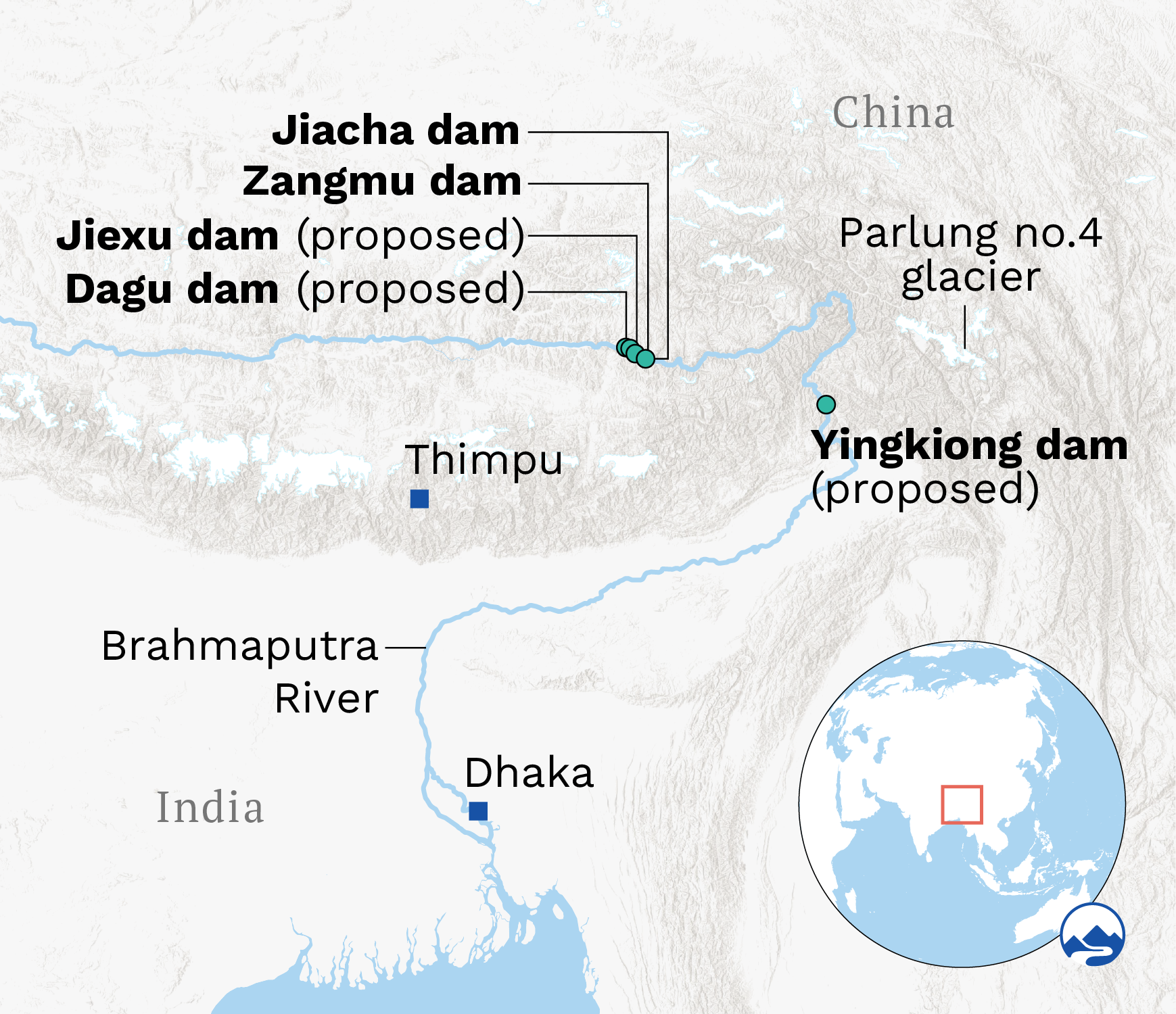 China damming the upper reaches of the Yarlung Tsangpo has triggered a response in downstream India. India fears that water availability could be affected in its northeastern states; Zangmu, one of the world’s highest hydropower stations, will be dwarfed once the construction of Dagu is complete.

In May, India announced plans to build the country’s second-largest dam with a storage capacity of 10 billion cubic metres of water at Yingkiong. Water minister Gajendra Singh Shekhawat said the proposed dam aims to regulate possible water shortages in the dry season and flooding in the monsoon months.

This dam is one of 170 proposed or under construction on the Brahmaputra River and its tributaries for irrigation and hydropower projects. In Arunachal Pradesh alone, hydropower projects with a capacity of 1,115 MW are in operation, with projects of 2,000 MW capacity under construction as of October 2021. One of these proposed dams, Etalin, will be the largest in India if built; campaigners have urged the government to reject clearance for the project, pointing out it will be built in an ecologically fragile and seismically active region.

India and China have both stated that, as run-of-the-river schemes, water flow would not be affected downstream.

This type of hydropower diverts the flow of a river to run past turbines and then discharges the water back into the river on the other side of the power station. It differs from traditional hydropower in that it uses no or limited storage (in the form of ponds), rather than huge reservoirs that affect the downstream flow of the river.

However, the definition of what constitutes a run-of-the-river project differs and such a project could still end up damming a large amount of water. Diversion of the river through a tunnel also almost dries up the original riverbed for a distance of up to 10 km, which means fish and other aquatic animals can no longer move along the river.

The rapid construction of dams continues despite researchers sounding warnings over melting glaciers on the Tibetan Plateau triggering earthquakes, avalanches, landslides and floods.

Climate change has already wreaked havoc on people’s lives and hydropower plants in the Hindu Kush Himalayan region, points out Li Dongfeng, one of the lead authors of a study published in June on the vulnerability of hydropower projects here.

The paper cites devastating floods in India’s northern Uttarakhand state in 2013 that killed over 6,000 people and damaged at least 10 hydropower projects. In 2021, an avalanche caused a flood in Chamoli district of the same state, damaging two hydropower projects and resulting in more than 200 dead or missing persons.

“When it comes to hydropower projects, a lot needs to change in High Mountain Asia to deal with the catastrophic disasters caused by the rising temperatures,” Li says. He recommends changing the design of hydropower projects so they can deal with the extremes of cloudbursts and droughts, as well as preserving forests and grasslands which act as natural buffers. Cooperation between countries is also vital, Li says.

However, collaboration between India and China on the Brahmaputra remains limited. Hydrological data sharing from China only covers the monsoon period from May to October, and it stopped in 2017 reportedly due to problems with the hydrological station. Data sharing only resumed in 2018, weeks before a meeting between Indian Prime Minister Narendra Modi and Chinese President Xi Jinping.

The mistrust between the two countries over the river can be gauged from an incident in 2017, when the Brahmaputra turned black and many fish and aquatic animals died. The incident prompted Indian politicians to blame Chinese infrastructure projects upstream for causing pollution.

Using a series of satellite images, analysis by Chintan Sheth, a research fellow at the National Centre for Biological Sciences, and Anirban Datta-Roy, a doctoral student at the time, now a senior programme manager at the Foundation for Ecological Security, both in India, found that earthquakes on the Tibetan Plateau had led to landslides that filled the river with sediment, which flowed downstream and blackened the water.

“Incidents like these expose the lack of data, study and cooperation on the transboundary Brahmaputra River,” says Anamika Barua, a professor at the Indian Institute of Technology, Guwahati, in India’s Assam state.

“It also underlines the dichotomy that exists between researchers and policymakers of both countries,” she says.

A substantial body of research by leading Chinese and Indian researchers constantly warns about the consequences of melting glaciers on the Tibetan Plateau, “but there are not enough studies about melting glaciers’ long- and short-term impact on the Brahmaputra River”, says Barua.

While diplomatic negotiations between the two countries are trying to break the stalemate, Barua says Brahmaputra Dialogue is another option – a multilateral initiative between India, China, Bangladesh and Bhutan that ran from 2013 to 2019, bringing bureaucrats, scientists, communities and non-profit organisations together. 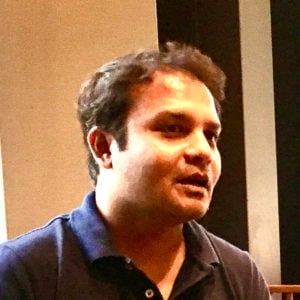 Alok Gupta is a freelance journalist who has reported from Hong Kong, India and China. Follow him on Twitter @alok227