The word “jihad” is often glossed as “holy war.” People, especially those who dislike Islam, think that it means aggression and that the conception is intrinsic to the religion of Islam.

In fact, the Prophet Muhammad never preached “jihad” in this sense of “holy war,” as I argue in my new book:

In the Muslim scripture, the Qur’an, the word “jihad” does not mean “to fight” but to engage in pious and ethical struggle (the same is true for other words from the same Arabic root). It has been suggested* that it is similar to the Greek agōn or struggle, conflict, challenge. Ancient Greek culture was highly competitive, and agōn was everywhere– in debate, athletic contests, etc. The Olympic Games were an agōn. The English word “agony” derives from this root, in the sense of an ordeal, but in Greek the word just means contest, and not necessarily an excruciating one.

Agōn also used in a spiritual sense in the New Testament.

12 Fight the good fight of the faith; take hold of the eternal life, to which you were called and for which you made the good confession in the presence of many witnesses.

in 1 Thessalonians 2:2, the apostle Paul uses the word agōn for the great “opposition” to his preaching there and at Philippi:

2 but though we had already suffered and been shamefully mistreated at Philippi, as you know, we had courage in our God to declare to you the gospel of God in spite of great opposition. 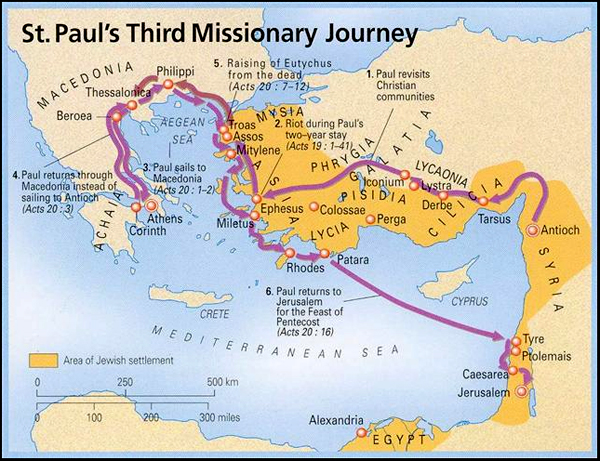 With regard to church fathers such as Basil of Caesarea (d. 379), Silouan Fontineas writes,

“In Basil’s letters, ascetic discipline and the struggle (ἀγῶνα [agōna]) associated with a life of purification, implied that the edification of a person’s faith came as direct consequence of
serving the other.”

Both of these senses, of spiritual struggle and of social conflict also characterize the Arabic jihad in the Qur’an, and my own suspicion is that jihad is an Arabic loanshift from the Greek agōn, i.e. that the Arabic conception was formed with regard to the Greek word. Certainly it is worthwhile systematically comparing the two concepts, and reading the word in the Qur’an with fresh eyes untainted by later medieval feudal notions.

You who believe: Bow down and prostrate yourselves, and worship your Lord, and do good, so that perhaps you will thrive. Strive steadfastly [jahidu] for the sake of God, mounting a struggle [jihad] for him as is befitting. He chose you, and imposed on you no hardship in religion, which is the Logos of your ancestor Abraham. And he named you monotheists [muslims] aforetime, something to which the Messenger will bear witness in your regard, and to which you will be witnesses to the people. So pray regularly, and give charity to the poor, and take refuge with God. He is your Patron, and the best of patrons, and the best of helpers.

This verse is clearly speaking of a purely spiritual struggle to be a good person and to honor God. The parallels in the verse for jihad are doing good, performing prayers, helping deserving people with charity (zakat), and taking refuge with God.

The way the Qur’an uses the term, when you give charity to the poor at the holidays, that is jihad. (Remember, above, that St. Basil used agōn/struggle to speak of the challenge of “serving others”). When you lose yourself in prayer or meditation, that is jihad.

The noun jihad only occurs four times in the Qur’an. All the passages are like this one. They don’t mention anything about fighting or warfare.

The verb, which also occurs above, also does not imply violence. One verse (The Criterion/ al-Furqan 25:52) talks about refusing to bow down to the militant pagans who opposed Muhammad’s teachings, and instructs him to engage in a major struggle with them “thereby,” i.e. a verbal struggle using the Qur’an. This is like the conflict or agōn St. Paul faced in Thessalonica and Philippi in Macedonia. This nonviolent sense of the verb here is fully admitted by the later Muslim commentary tradition (which, however, sometimes in other instances militarizes verses that bear no obvious such connotation).

The chapter of The Chambers (al-Hujurat) 49:15 instructs (Arberry),

“The believers are those who believe in God and His Messenger, then have not doubted, and have struggled in the way of God with their possessions and their selves; those — they are the truthful ones.”

The verses that come immediately before this one have nothing to do with conflict, and this verse forms one in a series of pastoral comments. It makes it clear that giving money to the cause and giving of yourself to the cause are both types of jihad.

This verse seems to me very similar to Paul’s letter to the Philippians (the new Christians among them, as we saw above, were facing severe opposition), 1:27:

“Only, live your life in a manner worthy of the gospel of Christ, so that, whether I come and see you or am absent and hear about you, I will know that you are standing firm in one spirit, striving side by side with one mind for the faith of the gospel.”

Here, the Greek verb used for to strive side by side with your “minds” or “selves” (Greek psyche, Arabic nafs), which is parallel to the Qur’an’s “struggled in the way of God with their possessions and their selves”, is συναθλέω (synathleō), which is from “syn”, i.e. together, and athleō— to compete or strive. It is of course the origin of our English word, ‘athletics.’ This verb in Greek does exactly the same work as the Arabic jihad. In fact, a word from the same Arabic root, juhd or effort, is used at the FIFA Arabic site to describe teams struggling to win the soccer World Cup. The root in Arabic has to do with struggle and effort, not with violence.

The Qur’an in the Mecca period, 610-622, advises believers who are harassed by pagans to simply “withdraw graciously” and to be “patient.” 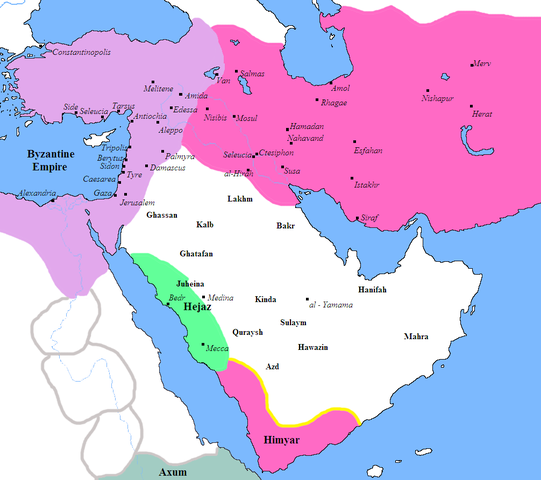 Of course, when Muhammad and his followers were expelled in 622 from Mecca in the Hejaz to Medina, and when the truculent pagans of Mecca repeatedly launched wars on them in hopes of massacring them and taking their city, the Qur’an permitted them to defend themselves militarily. 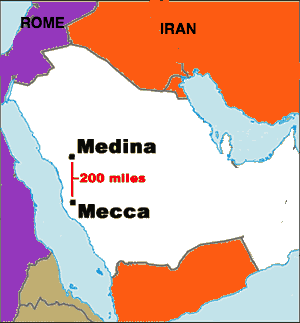 That wasn’t, however, an aggressive holy war but rather a just war of defense as understood by e.g. St. Augustine and St. Ambrose in late antique Christianity just before the time of Muhammad. Just war is not “terrorism” inasmuch as it is fought on a battlefield against peers. The Qur’an tells the believers to “fight those who fight you.”

There is no verse in the Qur’an where jihad is explicitly associated with physical, bellicose struggle. The word the Qur’an uses for fighting to protect the nascent Muslim community from the militant pagan invading armies is a secular one, qital.. There is no theory of holy war in the Qur’an, an idea likely developed by the Christian Byzantine Empire in its wars with Sasanian Iran, and which some Muslims later adopted from the Byzantines on the frontier as they fought them, in later centuries.

As far as I can see, Muslims in the generations after the Prophet’s death in 632 engaged in a series of linguistic shifts such that they endowed Qur’anic vocabulary with new meanings not originally present. Thus, the Qur’an says Solomon and the disciples of Jesus were muslims, which I translate as “monotheists.” It wasn’t the word for followers of Muhammad in particular– all the Abrahamians who followed the Word (Aramaic melta, Greek Logos, Arabic millah) of the one God were muslim. But later Muslims appropriated the term solely for the people of Muhammad and the Qur’an.

Likewise, in the Qur’an, fighting is qital (and it was always in self-defense in the Prophet’s lifetime), but, as Michael Bonner has argued, later generations appropriated the term jihad for that activity. Muslims in later eras also attributed a lot of sayings to the Prophet Muhammad. My own rule is that they are not reliable unless they clearly parallel a Qur’anic verse or value. Any saying or hadith that uses “jihad” to mean “holy war” is clearly much later than the Qur’an itself (though it may contain an earlier kernel).

My theory is that the Arabs who lived under the Eastern Roman Empire 106 AD to the late 500s had developed new words and had inflected old ones with Greek and Aramaic conceptions, which would have been important for those, like Philip the Arab, who rose high in the Roman state (he rose all the way to emperor) or those who studied philosophy or converted to Christianity. There were 400 years of linguistic interaction in northern and eastern Syria, the Transjordan, Palestine, and the northern Hejaz, for which we have no literary evidence before the Qur’an, though some rock inscriptions are now being found. There are even Bedouin bilingual Greek and Arabic rock inscriptions. Also important here is the theory of Fergus Millar that Near Eastern cities in the eastern Roman Empire used Greek as their urban standard rather than Aramaic. This situation would be consistent with the Petra papyri of the 500s and the Nessana documents, where Greek is used for letters and records by people who are clearly Arabs, and Arabic words and names are transliterated into Greek letters.

Roman Near East in time of Muhammad, Creative Commons via Getoryk.

I also think Arabic had an independent, direct relationship to Greek words and ideas not necessarily mediated by Aramaic or Syriac. For instance, in the Aramaic Peshitta New Testament, agōn is translated by k*t*sh, “to fight” in 1 Timothy 6:12, while in 1 Thessalonians 2:2 the Greek agon is just taken in as a loan, as ‘gown.

Another Greek parallel to jihad could be spoudaios, as used by Plotinus and his followers. Neoplatonists like Damascius were still active in Damascus and Bostra in the generation before Muhammad, and he is said frequently to have traveled up to those cities, for month-long trade fairs and it is possible that he resided up there some of the year. If, as seems likely, in Petra, Bostra and Damascus, Greek was the urban standard in the sixth century, then Muhammad would have often functioned in it there.

*Irfan A. Omar, “Jihad and Nonviolence in the Islamic Tradition,” in Peacemaking and the Challenge of Violence in World Religions, ed. Irfan A. Omar and Michael K. Duffey (Chichester, West Sussex: John Wiley & Sons, 2015), 9–41, this point on p. 37.

Return to Qur’an in Context: Commentary by Juan Cole