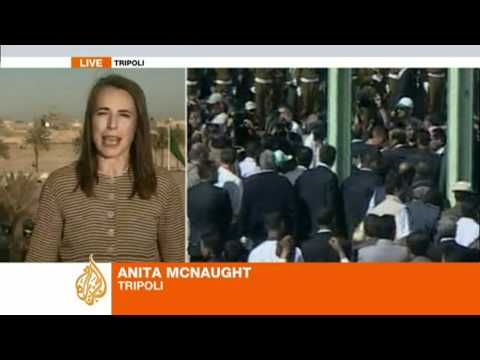 NATO finally seemed to get its act together on Sunday, striking multiple Qaddafi tanks at Misrata and Ajdabiya and allowing the rebels to hang on in each place.

At Twitter we read, “@feb17voices: LPC #Misrata: No casualties from intense attack by Gaddafi forces but extensive damage to steel factory area, gas storage tanks. #Libya”. I think a lot of people did not know that there is a steel factory in Misrata, nor that a lot of the
‘rebels’ against Qaddafi in that city are workers. And now the regime is spitefully destroying their livelihood and bombarding their families. (@feb17voices is an innovative technology that lets Libyans with telephone access phone in their tweets, run by John Scott-Railton, who did the same thing for Egyptians when the regime cut off their internet.)

At the same time, three leaders from the African Union arrived for talks in Tripoli, and Qaddafi said at least that he accepted their proposals. The AU team will now go on to Benghazi for talks with the Transitional Governing Council, which has in the past rejected any plan that leaves Qaddafi or his sons in power.

The problem with having the AU mediate is that the leaders chosen are not viewed by the rebels as honest brokers.

While the world has not been paying attention, Qaddafi has been using his oil wealth (and I do mean ‘his’) to peddle influence in Africa, to gain the loyalty of it leaders, and to intervene militarily.

It is so ironic that critics of the UN intervention in Libya keep asking why there was no such humanitarian mission in Darfur in the Sudan, where separatists among the black African Fur people have been massacred by Arabic-speaking black Africans loyal to Khartoum. But it was Qaddafi’s disastrous interventions in Chad and the Sudan that initiated that bloodbath. The contemporary Darfur problem started in 1987 when some Arabic-speaking militiamen from Chad, who had been armed by Qaddafi, established a base over the border in Darfur. They were the precursors of the Janjawid. Qaddafi, ever the regional imperialist and spoiler, had used his oil billions to fill the continent with armed mercenaries and guerrillas, whom he used to widen his control. He spent fruitless years trying to take over his southern neighbor, Chad, the northern part of which his troops brutally occupied for years.

Far away from his own territory, Qaddafi spread terror through his terrorist training camp, the World Revolutionary Center. Out of it came a cadre of coup- and war-makers hungry for blood diamonds, including Charles Taylor of Liberia and Foday Sankoh of Sierra Leone. Qaddafi and Taylor intervened in the Sierra Leone war. Hundreds of thousands were killed in these conflicts provoked in part by Qaddafi’s ambitious attempt to foster a generation of authoritarian, reactionary revolutionaries in his own mold, who would be his clients. Having billions in oil money allowed him to undermine security and to play favorites in West African politics.

Qaddafi pays 15% of the expenses of the African Union and essentially has many African leaders on retainer.

Qaddafi came out strongly against the revolution against Zine El Abedine Ben Ali in Tunisia. It seems certain that if he could get back into power and regain his riches, Qaddafi would try to undermine the outbreak of unwelcome democracy and a rule of law in Tunisia, his neighbor, and he has fingers into Egypt, as well. The terminally naive supporters of this billionaire serial murderer and his billionaire playboy sons who are firing indiscriminately on civilians said that no, Qaddafi would never do anything like that. What do they think he has been up to in Africa for the past 30 years? If he can be gotten out of power and the Benghazi government can establish a parliamentary system, not only Libya but all Africa will have achieved a great step forward.

The headlines are that Qaddafi has accepted the AU offer of a ceasefire and peacekeeping forces. It would be all to the good if he recalled his tanks and artillery and stopped hitting out indiscriminately at civilians in his cities. It is easier to get to peace from a ceasefire than from active war. Qaddafi’s bloodstained past and many murders require that UN allies in NATO and Arab League exercise the utmost vigilance that he is not just using the diplomacy as a cover to expand his territory and kill more people.

PS Aljazeera English reports on the stormy reception of the AU leaders in Benghazi on Monday: