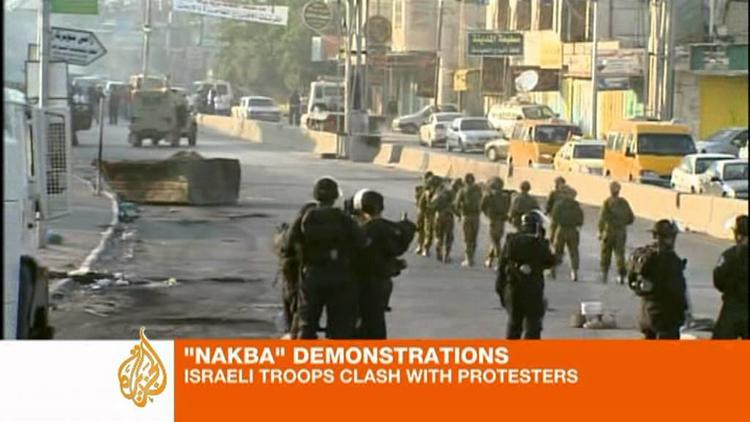 Contrary to the line taken by the Israeli leadership, the Palestinian protests on May 15, Nakba Day, were not an Iranian or Syrian plot but rather the grassroots protests of a dispossessed and displaced people that refuses to accept its fate as flotsam of the earth, deprived of their identity and dignity by the great Israeli Expulsion of 1948.

The Lebanese newspaper al-Akhbar reports that the Palestinians in the south of that country wanted to commemorate the Great Defeat (Nakba) of May 15, 1948, but rather than commemorating it they had to relive it. Thousands left their refugee camps all over Lebanon early in the morning Sunday and joined a lively procession they called “Parade of the Return to Palestine.” When they reached the southern Lebanese village of Ra’s Maroun, a few hundred were able to get past the Lebanese army line and to get near the barbed wire that marks the Israeli border, beyond which their parents or grandparents homes had been. The Lebanese army had tried to prevent them from reaching the barbed wire fence, firing shots over their heads. The Palestinians, undeterred, began throwing stones into the Israeli side, and waving Palestinian flags, and putting posters on the barbed wire. Israeli army troops were just a few yards away from all this.

For reasons that are not clear, the Israeli troops abruptly opened fire at the crowds along the barbed wire, killing 10 persons and wounding 112, some of them severely– according to a communique of the Lebanese army. The Guardian reports only 2 killed and does not mention the wounded. An Israeli general is quoted as saying the Palestinians were “vandalizing” the barbed wire fence, thus attracting the fire, and denied knowledge of Palestinian casualties. The Palestinians seem to have been convinced that the gunfire came in retalitation for the rock-throwing. For Israeli soldiers to fire over the border into Lebanon and kill Palestinians on Lebanese soil was felt by the Lebanese as a violation of their sovereignty.

In the Israeli-occupied Golan Heights, which belongs to Syria, a crowd of some 200 Palestinians from Syria got past Israeli barbed wire to come into the village of Majdal al-Shams, where they were fired on by Israeli troops, who killed 2-4 or more and wounded others. Likely it was the weakness of the Syrian state that allowed this small Return of Palestinians, not the machinations of Damascus.

Palestinian protesters in Gaza came toward the Israeli border (Palestinians are excluded from about 1/4 of Gaza that is near Israel), and were fired on.

Thousands of Egyptian protesters gathered outside the Israeli embassy in Cairo demanding the expulsion of the Israeli ambassador. When some tried to invade the embassy grounds, Egyptian troops used tear gas and live ammunition to disperse the demonstrators. One was critically wounded and many were sickened by the tear gas. The protesters complained that excessive force was used against a peaceful crowd.

What was driving the Palestinian protests is desperation and a state of statelessness, of being in limbo, of having no rights, no property, no prospects, living within sight of their former home, gazing at it from foreign countries that happen also to speak Arabic but which treat them as aliens or (as in Jordan) second-class citizens.

In 1948, European Jewish settlers in British Mandate Palestine ethnically cleansed some 700,000 Palestinians, depriving them of the country promised them by the League of Nations in 1920 when it recognized Palestine as a Class A Mandate and charged Britain with bringing the new country into existence. (Syria and Iraq were also Class A Mandates, i.e. former Ottoman territories now thought candidates for independent nationhood). Instead, Israel came into existence, born in a revolt against the British and a civil war with the Palestinians who formed over two-thirds of the population of Palestine.. Palestinians who had lived in what became Israel were forced by the Zionist military north to Lebanon, east to the West Bank, Syria and Jordan, and south into the Gaza Strip and Egypt. Most of those expelled from their homes were civilian non-combatants and some had informal peace agreements with inhabitants of neighboring Jewish settlements. There are now some 12 million Palestinians, given natural increase. About 1.5 million live in Israel and have a precarious citizenship, being only 20% of the population of an avowedly Jewish state. There are about 3.6 million in Jordan who have citizenship and another 140,000 or so (mainly from Gaza) who do not. The some 400,000 in Lebanon do not have citizenship, nor do the 450,000 in Syria. There are about 4 million in Gaza and the West Bank under Israeli military occupation who lack citizenship in a state.

Palestinians thus became a scattered, largely refugee people, lacking a state that would guarantee them basic rights and human dignity. In Lebanon, where I have done interviewing with them, they cannot own property, mostly cannot work, cannot get permission to travel to Syria or Jordan. Their camps have poor security and sometimes, as with Nahr al-Bared, come to host tiny outlaw groups that cause the whole camp to be attacked and destroyed. I talked to an old man in his 80s in Nahr al-Bared, living in UN temporary dwellings because the small city had been reduced to rubble in an attempt to destroy some 50 fighters of Fatah al-Islam. He recalled how in 1948 he was living with his mother in an apartment in Haifa when Zionists came and took it from them. They fled to the Lebanese border where they lived as refugees for a year. Then the UN workers put them on a train and took them up to Lebanon’s Tripoli in the north, settling them in a refugee camp. He had been there ever since. He could not own property. He had never been able to have a job. He took me by the hand and led me to a small room where there were two sick old ladies. “Look at them,” he said. “Is this any way to live?”

Israeli suggestions that Lebanon give them citizenship are an attempt to evade responsibility for the ethnic cleansing; Lebanon did not dispossess them, Israel did. Lebanon has a delicate balance of minorities, and giving hundreds of thousands of mostly Sunni Arab Palestinians citizenship would altogether upset it (it is only a country of 4 million anyway). But mainly, why should they? Why should not Israel have to clean up its own mess?

Since the Palestinians’ lack of a state is what allows them to be treated like dirt, to be further dispossessed at will, to be blockaded from basic staples, to be put in a condition of “food insecurity,” it follows that what they need above all is a state. I asked the twice-over refugees of Nahr al-Bared what they would do if President Obama succeeded in securing a two-state solution. They almost shouted. We’d be in Jericho tomorrow, they said. They’d go to the West Bank, where their citizenship would be recognized. They’d finally have a passport. They could get a job, own property, be proper human beings, escape the great Palestinian-Jail that the world community had placed them in for the sake of Israel. Mind you, they were from Haifa and the Galilee. They wouldn’t be going home. But they would be going to their nation-state and that was better than the nothing they now have.

The current Israeli government continues to steal land from the Palestinians and to attempt to blockade those in Gaza. It continues to deny responsibility for the millions in exile. It has never paid a dime in reparations for all the property it usurped from them. As long as Israeli policy looks like this, Israel will remain an insecure bunker on the fringes of the Middle East, a Middle East that has itself become fluid and subject to popular tsunamis.

I like Israel and Israelis, and I’d like to see them have normal, anxiety-free lives. But the policy of the present government toward the Palestinians is self-defeating. Self-defeating is one of those dead phrases that we don’t think about when we hear them. I mean really, self-defeating.