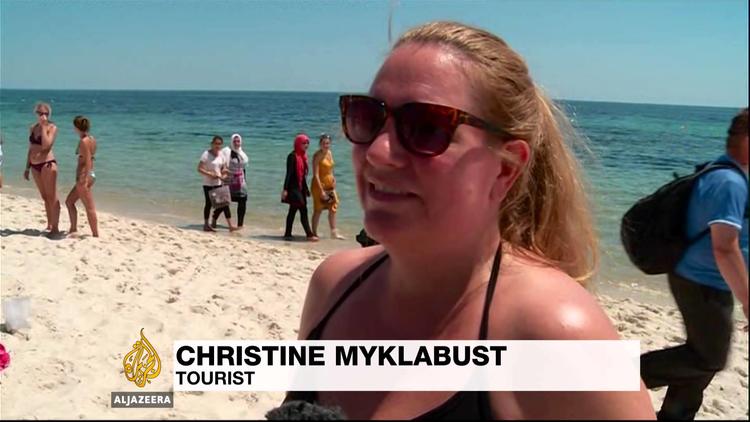 In an interview with Swedish radio I was asked if there is any support for these radical Islamist ideals among people in Tunisia, and I could honestly respond with a blank no. Tunisians are in all possible ways defying the terrorist attack on Friday, which killed 39 people.

More and more stories reveal how Tunisians tried to stop the killer by creating human shields on the beach and how a builder threw tiles from a roof top screaming “You terrorist, you dog.” And a footage circulating online shows a woman beating one of the suspects whilst he is escorted away by police.

Tunisians are resilient. Human rights activist Lina Ben Mhenni said shortly after the attack in an interview: “Where there is breath there is hope. As long as there are people who believe in fighting for real change for this country, we have to stand together. We are not giving up.” The rights activist later participated in an anti-terrorism demonstration held in Sousse on the eve of the event. Since then two other demonstrations have been held, in Tunis and Sousse.

But despite the determination and resilience there is another feeling that is arising as the shock of the country’s bloodiest attack begins to dwindle. Anger. Questions arise, like, how could this happen, again?

The security forces are now facing criticism. The signs were there. After the Bardo attack IS pledged online that they too would come to Tunisia this summer as a counter reaction to the social media campaign by tourists promising to visit the country despite the terrorist threats. There were also promises from IS to intensify its attacks during Ramadan, and it was Friday, the holiest day of the week, prayer day. After the Bardo attack the government promised tightening security measures. Now analysts ask, where were they? The tourist hotspots of Sousse and Hammamet were clear targets. Mazen Cherif, security analyst for the Tunisian Centre for Global Security Studies told Tunisia Live: “Here in Tunisia we still haven’t learned our lesson since the Bardo attacks.”

Whilst the Bardo attack was considered a one-time event, Friday’s tragedy shows that this new type of terrorism, targeting tourists and foreigners, is here to stay. The Tunisian democratic success story has become a target to radical Islamist groups such as IS. The tourism sector symbolises not only “the Western world” but also the country’s economy as it makes up for about 15 percent of the country’s GDP and is believed to employ about 1 million people.

As after Bardo, the government promised a security clampdown. Prime Minister Habib Essid presented a twelve point counter-terrorism plan shortly after the attack including the closing of 80 mosques believed to incite violence and army reservists would be deployed to tourist sites.

But where are the measures attacking the root of the problem? In a school in Sidi Bouzid, a place central to the revolution, as well as one of the cities with the highest number of jihadists leaving for Syria, two teachers told me, earlier this year, that they were not allowed to speak about the jihadist phenomenon in the class rooms. It is considered politics, they explained. However, they both agreed that a more open debate would be beneficial.

We need a commission dealing with radicalisation, a proper investigation into this phenomenon, declared Ennahda Parliament member Sayida Ounissi when we met earlier this year. Last time we spoke, two days before the attack she also called for a more comprehensive strategy. The anti-terrorism law that needs reform was made priority after the Bardo attack, yet Ounissi suspects it will take until the end of the year before it is approved. Even though the law in itself will not do magic, she says, it is an important step that should be given priority.

At the same time President Beji Caid Essebsi emphasised that Tunisia is part of a global threat and that the country needs all the help it can get. Tunisia has proven to be incapable of dealing with that threat alone. Essebsi has declared that this is an administration of reform, and now is the time to show the country’s comprehensive counter-terrorism commitment. In the meantime, as the small Mediterranean country is entering what possibly is its most challenging post-revolutionary period, we better not abandon Tunisia.

Christine Petré – @christinepetre – is an editor at Your Middle East. You can follow her work at www.christinepetre.com.

Aljazeera English: “Tunisia holds vigils for those killed on beach”