News trickled out of a Paris hospital on the evening of 4 July that Iranian cinematic auteur Abbas Kiarostami lost his battle against cancer at the age of 76.

Kiarostami had been admitted to Tehran's Arad Hospital in mid-June, where he had undergone an operation to remedy his severe gastrointestinal cancer. On 27 June his family decided he should seek further medical treatment in Paris, and he was flown out through an air ambulance by his associated production company.

The tributes and mourning that followed word of his death went well beyond Iran's borders, as the filmmaker was a legend both within his own country and abroad for his artistry. 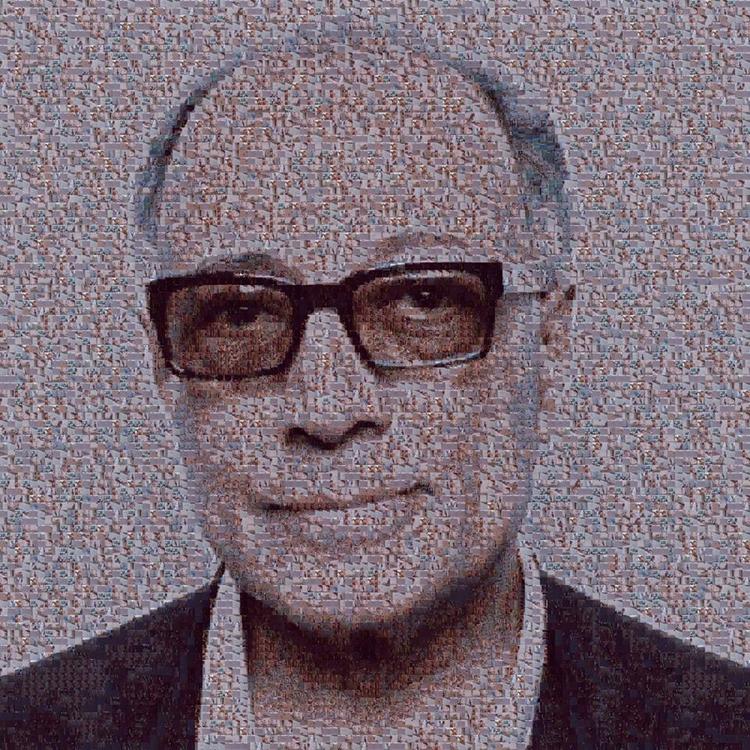 A photo of Abbas Kiarostami shared by Hossein Setareh on Facebook made out of 1,000 frames from the 1987 Kiarostami film “Where is the Friend's Home?.” Image republished with permission.

On social media, members of Iranian cinema such as the actress Taraneh Alidoosti viewed Kiarostami's passing as a loss for the industry and the country as a whole:

What a dark moment for Iran, and his many enthusiasts around the globe; we all lost a great man today. #Kiarostami

French-Swiss director Jean-Luc Godard once canonized Kiarostami's role in cinema by stating, “Films begins with DW Griffith and ends with Abbas Kiarostami.” Martin Scorsese would go on to say, “Kiarostami represents the highest level of artistry in cinema.”

Kiarostami himself reacted to this praise (which we can now read with tragic hindsight), saying, “This admiration is perhaps more appropriate after I am dead.”

Kiarostami was the first and only Iranian to win the prestigious Palme d'Or, the highest prize awarded at the Cannes Film Festival, for 1997's “Taste of Cherry,” in addition to a host of other (primarily European) honours and awards.

In Iran, his films were often received with unease and censorship by authorities. Prior to the Islamic Revolution of 1979, he was censored for displaying images of women in hijab; after the revolution, it was his films that displayed women without the hijab that prevented them from national distribution. Despite the limitations, and unlike a number of his peers, Kiarostami was one of the few artists and filmmakers who did not leave Iran following the revolution.

In a 2005 interview with the Guardian, Kiarostami would explain:

The government has decided not to show any of my films for the past 10 years. I think they don't understand my films and so prevent them being shown just in case there is a message they don't want to get out. They tend to support films that are stylistically very different from mine – melodramas.

Despite these differences, Kiarostami still maintained much respect and admiration amongst officials. Iran's Minister of Health, Hassan Ghazizadeh Hashemi was amongst the last visitors to tend to Kiarostami's bedside while in the hospital in Tehran.

We talked to some Kiarostami fans and asked them to share some of their favourite scenes and moments from the filmmaker's canon of work.

Sahand Sahebdivani, an Iranian-Dutch storyteller, chose a scene from the 1990 docufiction, “Close-Up.” He explained why the scene touches him so:

This scene is when a man who might not be completely mentally sound meets a famous director. The director asks him what he's done and he says “on the outside seems I've defrauded a family,” to which Kiarostami asks, “but what about the inside?” He responds “the inside (inner truth) is that I was simply a fan of cinema.” In our prison system [in Iran] we need “party bazi” (or some kind of nepotism), so someone who can help us to get a more lenient sentence. But when the director asks this man what he can do for him, he never asks “tell the judge not to be harsh”. He simply (or absurdly) asks the director to make a film about his suffering. While all the time the camera man locks on his intense gaze. Everything tells us this man is unstable, but he's us. We're trapped in a system we can't get out of, and instead of asking our filmmakers (currently deemed higher than our poets and writers) to release us we tell them simply to show our suffering and show the difference between the inner and outer reality. Heartbreaking really.

Sadaf, an Iranian Kiarostami fan in Tehran, shared her favourite scene from “Taste of Cherry,” and explained:

Apart from my favourites, I can share something else with you. I met him three years ago in a small gathering. He said, “I want people to relate to my movies, that's why my camera lens is usually at eye level. I want you to experience the characters. Feel them and feel as though you are having a dialogue and conversation with them.” And that is what you feel, truly, when you watch his movies. You relate. The stories are real. Some of them we deal with on a daily basis. I will always have much respect for him and his work because he was real.

Arash Azizi, an Iranian journalist based in Berlin, highlighted the opening credits of the French-Japanese drama “Like Someone in Love“:

At the height of his mastery, the poet-filmmaker of the villages of Gilan moonlighted in Tokyo and told us a story backgrounded by the magical jazz of Ella Fitzgerald. For me, it was realisation of a dream I didn't know I had — and this is why I fell in love with Kia's “Like Someone In Love”. He proved that his poetic vision transversed its Persian roots and it could give life to stories beyond. Alas it was to be his last feature.

I hadn’t watched any of his movies till a couple of years ago. At that time I was working for an independent cinema production company and a colleague brought a DVD to the office: it was Taste of Cherry, plus some interviews and a couple of his early short movies in black and white. When I think of that film, I am still moved by the enormity of the talent behind it: storytelling with a universal message in such a minimalistic way is a gift only geniuses have. Kiarostami transformed a movie on suicide into a hymn on life just by telling us to enjoy the beauty of the smallest things. As if a man who enjoys these things, regardless where they live and what they have been through, would have to live till he could enjoy them again.

Thomas Erdbrink, a Dutch journalist living in Iran, shared his admiration for the scenes of the 2008 film “Shirin“:

One of my favourites is ‘Shirin’ where actresses from before and after the revolution listen to the famous Iranian love story of Farhad and Shirin. Kiarostami shows us their reactions. Lovely film.

My favourite scene is from Close Up where Sabzian meets the family he defrauded by pretending to be a famous film director. Kiarostami recreates the true story of the fraud using all the actual people involved but this time as actors, playing themselves. In this scene, Sabzian's true identity has been exposed to the family but they forgive and welcome him to their home. Kiarostami's masterpiece is a true intervention in reality, showing the therapeutic and unifying power of cinema.

On a scene between a mother and son from the 2002 docufiction, “Ten,” Sarvenaz, an Iranian-American fan explained:

The ability to bring out such raw and real emotion between a mother and son. One of my favorite scenes. Rest in peace.

An Italian photo-journalist who has spent time photographing Iran, Nicola Zolin explained the inspiration he received from the 1997 award-winning “Taste of Cherry“:

What inspires me most was especially his movie “Taste of Cherry” which expressed the way Kiarostami was able to give voice to the voiceless I would say, or those parts of society which are never really heard from. This movie with the character who is driving who wants to kill himself, driving to the south of Tehran and meeting the most random people, and the depth of the dialogue drives you completely inside the sense of existence, and that to me is what Kiarostami was able to do, how to show the sense of existence through the peculiarity of the Iranian people, their dreams, preoccupations and their visions of the world, and this for me was also very inspiring to get to know this culture [Iranian] that I've been exploring and studying, which I admired, and he was the first vehicle for me to get to know it, and learn to love it and get to know the depth of it.