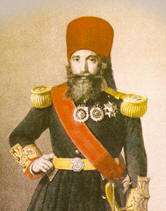 Some observers imply that in 1861, most people in the world believed in slavery and so you can’t blame the American South for retaining it. This premise is not true. For one thing, a majority of American states had abolished slavery. Ohio did in 1802, and by 1804 all the northern states had. Haiti made a revolution to abolish it in 1804. Chile abolished it in 1823, Mexico and Central America in 1824 (Anglo-Texans resisted this measure, what with being enlightened northern Europeans and all and in 1836 they made it legal again in Texas). Spain banned slavery in its European territory in 1837. The argument that most people believed in slavery at that time so you can’t judge American plantation owners is false. The Southern states were outliers in the New World along with Brazil, and Anglos actively rebelled against an enlightened Mexico over the issue.

In 1846, the Bey of Ottoman Tunis, Ahmad, issued a decree banning slavery in his realm. He had himself been a slave and was convinced by the British consul to take this step. (See Ismael M. Montana, The Abolition of Slavery in Ottoman Tunisia (U of Florida 2013).

Since the Qur’an, the Muslim scripture permits but discourages slavery, Ahmad Bey actually engaged in modernist jurisprudence to interpret the text as being in accord with his decree. Many clerics and Tunisian slaveholders disagreed. Ahmad Bey’s immediate successor in the 1850s was unenthusiastic about the decree and may not have enforced it, but he did *not* repeal it and it was in force under Muhammad III in the 1860s.

The need for a modernist theology was universal, since American Christians at the time faced the difficulty that the Old Testament clearly authorized slavery and the NT even advised returning a runaway to his master. Eugene Genovese once told me he thought that Evangelical literalism is probably rooted in part in a need for pro-slavery Christians to interpret the Bible literally so as to uphold slavery. That is why there are to this day vanishingly few African-Americans in the Southern Baptist Convention.

Precious Rasheeda Muhammad wrote a fine survey for MPAC of Muslim American history and brought the following to my attention.

Sen. Charles Sumner gave a speech in Congress in 1860, the first since he was viciously beaten by a South Carolina representative, in which he praised the Qur’an’s emphasis on manumission as a good deed and on human treatment of slaves!

In the 1860s, during the Civil War, Tunis authorities pressed the US to go through with abolition. Consul Amos Perry wrote to Secretary Seward on Dec. 7, 1864, explaining that Ahmad Bey had abolished slavery in 1846 and adding: “that the actual Bey entertains similar sentiments I have ample proof.”

He encloses a letter to the US from Gen. Hussein, the president of the municipal council of the city of Tunis. Hussein wrote to Perry that he understood that the latter,

“coming from a country where liberty and slavery for a long time existed and flourished side by side, and where they are at present involved in a death struggle for supremacy, you find main facts in the history of Tunis calculated to throw light on the legitimate influence of those two antagonistic principles.”

Gen. Hussein allowed that the Qur’an permitted slavery, as did Judaism and Christianity, but said that it forbade mistreatment of the slave and made it a grounds for obligatory manumission.

“O inhabitants of America . . . since God has permitted you to enjoy full personal liberty and to manage your civil and political affairs yourselves, while many other people are deprived of such distinguished privileges and blessings, it would not tarnish the lustre of your crown to grant to your slaves, as an act of gratitude for the favors God has bestowed on you, such civil rights as are not denied to the humblest and meanest of your citizens. . . Humanity invites you to eradicate from your Constitution all that can give countenance to the principle of slavery . . . In concluding this letter, Monsieur . . . permit me to express my profoundest regrets for the war that afflicts and saddens your land, and my tenderest sympathies for the slaves there doomed to suffer.” (Via FRUS .

There is more warmth, more humanity and more principle in this one paragraph from a mid-nineteenth-century Muslim in Tunis than in all the utterances ever voiced by some contemporary American pundits.

So no, historical relativism can’t help here. If the Tunisian government was willing 170 years ago to reinterpret the Qur’an itself so as to abolish slavery in the northern tip of Africa, there was no excuse for Robert E. Lee to capture escaped slaves and sell them back into slavery. There aren’t two legitimate sides to this issue.