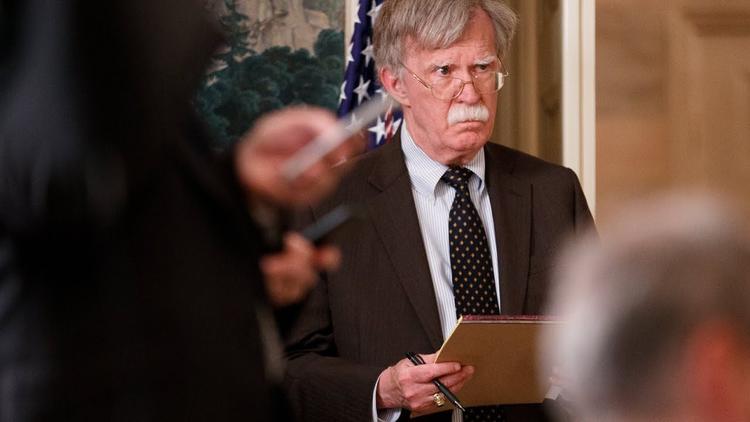 For a man with a reputation for venting spleen and flying off the handle, John Bolton bided his time before finally rising to the position of power he now occupies.

The former U.S. ambassador to the UN spent much of the last decade consolidating his political base through stints at right-wing institutes like the American Enterprise Institute, media appearances on Fox, and the occasional reckless op-ed. He considered running for president in 2012 and 2016 but chose not to take the risk. Instead, he raised large amounts of money for extreme right-wing Republican candidates like Senator Tom Cotton (R-AR).

When Donald Trump appeared on the political scene, Bolton eagerly endorsed the candidate in the presidential race and offered himself up as a potential secretary of state. Trump won, but Bolton didn’t get the call. A similarity in temperament and a difference in ideology seemed to doom his appointment. The White House, after all, couldn’t possibly accommodate two filterless hotheads.

Moreover, Bolton’s continued support for the Iraq War and a more interventionist U.S. foreign policy seemed to put him forever at odds with the new president. “Bolton’s lambasting of global aristocrats aside, there isn’t much in the man’s worldview that rings consonant with President Trump’s ‘America First’ foreign policy,” wrote Daniel DePetris in The American Conservative.

That was then. Now John Bolton is Trump’s national security advisor.

After a steady diet of levelheaded corporate execs and restrained military men, Trump clearly wanted a little more hot sauce in the Oval Office. As for the differences in ideology, those were largely fictitious. Trump has no ideology, and Bolton is smart enough to tailor his message to his audience.

Trump is a very powerful boat with no rudder. Unfortunately, Bolton is now his rudder. Which effectively means, when it comes to foreign policy, that it’s Bolton’s administration now.

National security advisor is the perfect position for Bolton. He didn’t have to go through any messy confirmation hearings. He doesn’t have to perform any of the ceremonial tasks of a secretary of state.

He can instead focus on what he does best: steering government policy far to the right. Only a few weeks into his job, he can already put one notch in his gun for helping to steer the United States out of the Iran nuclear deal.

This should have been an easy task, since Trump had already made clear his distaste for the agreement. But there was still significant disagreement within the administration. Bolton, it appears, tilted the balance away from those, like Defense Secretary Jim Mattis, who preferred to remain within the agreement. Writes Mark Langler in The New York Times:

Even if Mr. Mattis had wanted to fight for the deal, it is not clear how much he would have been heard. Mr. Bolton, officials said, never convened a high-level meeting of the National Security Council to air the debate. He advised Mr. Trump in smaller sessions, otherwise keeping the door to his West Wing office closed. Mr. Bolton has forged a comfortable relationship with the president, several people said, channeling his “America First” vocabulary.

Now that he has this comfortable relationship, Bolton will move on to more challenging assignments. “By working in the West Wing, the national security adviser spends more time with the president than the secretaries of State or Defense, and so can always get the last word,” writes Jonathan Swan in Axios. “But Bolton is signaling restraint until Trump makes a decision.”

So, for instance, with the Iran deal decision made, Bolton

Meanwhile, as the president’s enforcer, it’s Bolton’s job to play the bad cop. He’s already done so with Europe, raising the possibility of sanctioning European businesses that continue to work with Iran. Bolton must love the opportunity to kill two multilateral birds with one unilateral stone.

However, the test of Bolton’s impact shouldn’t be Iran, where his views intersect with Trump’s. The real challenge will be on issues where Bolton’s stated preferences are diametrically opposed to current policy.

From Regime Change to Rapprochement?

John Bolton has never concealed his desire to see the collapse of the current government in North Korea. In February, even after the two Koreas had cooperated in the Winter Olympics, Bolton continued to argue in the Wall Street Journal that the United States should launch a preemptive military attack on Pyongyang and its nuclear facilities.

The Journal piece featured a bizarre, legalistic argument based on his interpretation of a British attack on a Canadian steamboat in U.S. territory in 1837. (No, I’m not making this up). Bolton didn’t bother to devote any space to the likely consequences of a preemptive attack on North Korea that, unlike the British example, could escalate to an exchange of nuclear weapons and involve the deaths of more than a million people.

It was pure Bolton: a legal intellect plus an instinct for bombast — and minus any acknowledgement of real-world consequences.

Now, as national security advisor, Bolton must wrap his mind around the reality of the potential summit between his boss and Kim Jong Un, scheduled for June 12 in Singapore. This might seem to put Bolton in a bind, forcing him to make arguments that run counter to his long-held preferences.

But remember: Bolton knows how to bide his time. He knows that the track record of U.S.-North Korean negotiations isn’t very good. He knows that a failed summit could easily push Donald Trump to the other side of the spectrum — or perhaps, given North Korea’s reaction to the recent U.S.-South Korean military exercises, the summit might not happen at all. A Trump scorned will likely find regime-change arguments more compelling.

In the meantime, Bolton is doing what he can to subtly undermine the upcoming summit. He’s ratcheted down expectations by saying that the Trump administration isn’t “starry-eyed” about the meeting. He’s loaded the summit agenda by adding “their ballistic missile programs, their biological and chemical weapons programs, their keeping of American hostages, the abduction of innocent Japanese and South Korean citizens over the years.” It would be hard enough to negotiate a nuclear agreement even without adding these other elements (though North Korea has already released the “American hostages”).

But perhaps the most sinister tactic Bolton has deployed involves his references to Libya. In interviews, he has said that Libya’s denuclearization in the 2000s can serve as a model for the North Korea talks.

Libya? The country that gave up its nuclear weapons program and then, within a few years, experienced civil war, foreign intervention, and regime collapse? Is that really the kind of model you want to highlight with a country like North Korea, which is worried about precisely such a scenario?

An anonymous source in the Trump administration told Abigail Tracy of Vanity Fair that Bolton is sending his own message to the North Koreans: “I mean, there is only one reason you would ever bring up Libya to the North Koreans, and that is to tell them, ‘Warning: don’t go any further because we are going to screw you’… So yeah, I completely agree that that is a dog whistle to the North Koreans, telling them, ‘don’t trust us.’”

Of course, Bolton’s mere presence in the administration, even if he just stands quietly in the corner and scowls, sends the message that this government is not to be trusted. Perhaps that’s the real reason for North Korea’s sudden summit skepticism.

War at the Top?

Thomas Wright, in Politico, argues that Bolton and Pompeo are cruising for a mutual bruising. He argues that it’s not hawks versus doves in the Trump administration, but “litigators versus planners.”

The litigators, led by Trump and deputized to Bolton, see national security policy as a way of settling scores with enemies, foreign and domestic, and closing the file. They will torpedo multilateral deals, pull out of international commitments and demonstrate American power before moving on to the next target.

Planners, on the other hand, are worried about the day after — for instance, how the United States addresses Chinese economic power in the wake of a pullout from the Trans Pacific Partnership trade deal.

It’s not yet clear whether Pompeo is a litigator or a planner, and thus whether he’ll team up with Bolton or side with the quintessential planner, Jim Mattis, to challenge the national security advisor’s blow-‘em-all-up philosophy. Wright expects a showdown.

I’m not sure. I expect tactical alliances between Bolton and Pompeo (on Iran) and tactical disagreements (on China). Where they disagree, Bolton probably will gain the upper hand, if not immediately then eventually, because he knows better how to manipulate the levers of power.

But on the general direction of Trump’s foreign policy, Bolton and Pompeo are in agreement. The faux-isolationism of Trump during his presidential campaign fooled a number of neoconservatives into voicing their opposition. But it didn’t fool either Bolton or Pompeo.

Let’s be clear: There is no American “retreat” from the world. Under the rubric of “America First,” the Trump administration has created a new kind of multilateral engagement — aligned with the hard right in Israel and Mohammed bin Salman in Saudi Arabia, allied with authoritarian and far-right leaders like Recep Tayyip Erdogan in Turkey, Vladimir Putin in Russia, and Viktor Orban in Hungary, and in support of a range of plutocratic interests over and above the wellbeing of the majority and the planet as a whole. (I long for Angela Merkel to just come out and say it: “Gott im Himmel, we must oppose this new Axis of Autocracy!)

So, not a retreat from the world but a retort to the world: Move this way, not that. As the Washington Examiner recently editorialized, “Trump’s foreign policy record is one of America continuing its role as global leader — even if we’re leading in a direction that displeases John Kerry.”

But please, let’s not talk about Trump’s “foreign policy record.” This is not the world of Donald Trump. The world of Trump is Mar-a-Lago, Fox News, and his Twitter account. His worldview is limited by his over-inflated ego and bank account.

No, this is the world of John Bolton. And, for a limited time before he blows it up, we’re just living in it.