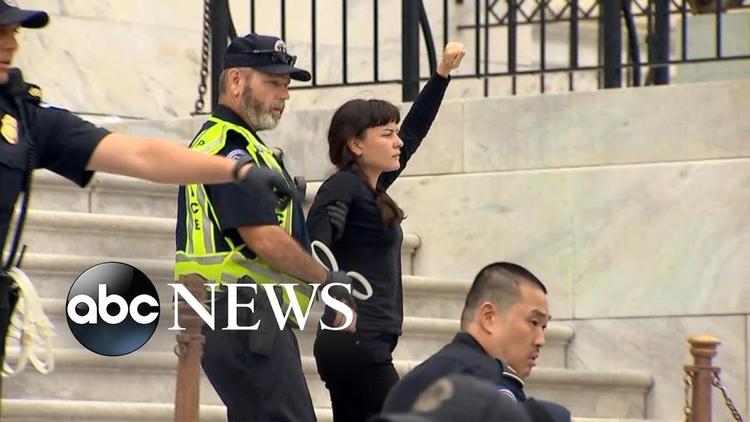 Despite the considerable cloud over his head, Brett Kavanaugh was put on the Supreme Court on Saturday, in what may best be described as a plutocratic coup by the ruling-but-minority Republican Party. Since Kavanaugh succeeds Justice Anthony Kennedy, who often served as a swing vote on those occasions when a decision veered to the left, we can expect the Court to veer to the far right. Given that we have a racist, authoritarian demagogue in the White House, the gutting of the Supreme Court comes at the most perilous possible time for what’s left of our democracy.

1. The Muslim Ban. The Supreme Court upheld by a 5-4 majority Trump’s visa ban on five Muslim-majority countries (along with a few cosmetic restrictions on Venezuela and N. Korea in a pathetic attempt to camouflage the flagrant racism of the executive order). Chief Justice John Roberts argued for an almost absolute right for the president to decide on immigration issues, despite the language in the law forbidding discrimination.

In Trump v. Hawaii, one of the two dissents was penned by Sonia Sotomayor and began this way:

“The Court’s decision today fails to safeguard that fundamental principle. It leaves undisturbed a policy first advertised openly and unequivocally as a “total and complete shutdown of Mus­lims entering the United States” because the policy now masquerades behind a façade of national-security con­ cerns. But this repackaging does little to cleanse Presi­dential Proclamation No. 9645 of the appearance of dis­crimination that the President’s words have created. Based on the evidence in the record, a reasonable observer would conclude that the Proclamation was motivated by anti-Muslim animus. That alone suffices to show that plaintiffs are likely to succeed on the merits of their Estab­lishment Clause claim. The majority holds otherwise by ignoring the facts, misconstruing our legal precedent, and turning a blind eye to the pain and suffering the Procla­mation inflicts upon countless families and individuals, many of whom are United States citizens. Because that troubling result runs contrary to the Constitution and our precedent, I dissent.”

A 5-4 decision is fragile and open to being reversed, despite the Court’s dislike of overruling its own precedents (stare decesis). Typically a 5-4 decision is later effectively overruled in a case that is larger than the original one in its implications. There was always hope that support for Trump’s arbitrary and discriminatory Muslim ban would eventually collapse. Kavanaugh, however, would certainly have voted with the majority, and his confirmation shores up that majority into the distant future.

The really dangerous thing is that Trump may not be done excluding Muslims, and the Kavanaugh court will let him do pretty much anything he wants to those applying for immigration

2. Gay Marriage.. Kavanaugh is most dangerous where he turns out to be more conservative than Kennedy, whom he is succeeding. For instance, Obergefell v. Hodges (2015), which granted the right of gay marriage, was a 5-4 decision in which Kennedy’s was the swing vote. Kavanaugh refused to answer Kamala Harris’s question about the gay marriage decision, as to whether it was correctly decided. Over time he could well undermine this right for the LGBTQ community.

3. Torture. Trump has pledged to torture people, and to torture them with great brutality. The Supreme Court declined to hear a lawsuit brought against US officials on grounds that they had ordered the inmates tortured, letting stand a lower court ruling that gave the officials immunity on the grounds that they were just doing their jobs (the Nuremburg Defense!). Given the inclination of Trump to torture, more such cases may come before the court. Kavanaugh was a White House lawyer in the Bush administration and although he denies he ever was involved in torture debates back then, it remains to be see if he is eager (as Scalia was) to see people tortured by the US government.

4. A Woman’s right to Choose. Kennedy had been the swing vote in Planned Parenthood of Southeastern Pennsylvania v. Casey (1992), which held that states could not impose an undue burden on a woman’s right to have an abortion. States whose politics are dominated by Evangelicals have been quietly making abortion unavailable by imposing Draconian regulations on abortion clinics that cause them to shut down. Many women have been de facto deprived of the right to decide whether to have a child by the unavailability of abortion facilities, which the states have connived at. (Many women don’t have the money to travel hundreds of miles and stay at a hotel for the procedure). Some more egregious such attempts have, however, been struck down by the Supreme Court, as in Texas a couple of years ago, pointing to the precedent of Casey. Kavanaugh would almost certainly overturn Casey if he gets the chance.

5. Big Money Dominating Politics. Citizens United (2010) and other recent Supreme Court cases allowing the super-rich to saturate the airwaves with advertising for the candidate they back, with full knowledge that they thereby ingratiate themselves with the candidate and can expect to call in favors– all this has made money king in the American electoral system. It isn’t that most Congressmen are personally bribed. It is their campaigns that receive the money. But a big war chest is job security for congressmen and senators.

Richard L. Hasen explains that “Justice Anthony Kennedy, writing for the Supreme Court in 2010 in Citizens United v. Federal Election Commission,” rejected the idea that it is corruption for large donors to the campaign of a politician is corruption. Rather, the donor receives only “Ingratiation and access” which is permissible. In a case decided in 2014, McCutcheon v. Federal Election Commission, Chief Justice John Roberts went even further, celebrating the idea of politicians responding to the wishes of big donors and spenders. Not only are “ingratiation and access” afforded those making large campaign contributions not corruption, Roberts explained. Donors “embody a central feature of democracy — that constituents support candidates who share their beliefs and interests, and candidates who are elected can be expected to be responsive to those concerns.” In a democracy, Roberts tells us, we should want politicians to be responsive to big donors.

Citizens United was another fragile 5-4 decision that could have been weakened or ultimately overturned. Now, the 5-4 majority for it has been reinforced and likely become set in stone to the vast detriment of our democracy.

. Social scientists have found that the rapid march of the United States toward being a highly unequal society and a plutocracy has been enabled in part by the corporations’ gutting of the union movement. The right to form unions and to pursue collective bargaining and to go on strike have been seriously degraded, so of course employers do to workers whatever they can get away with, including grossly underpaying them. Kavanaugh’s rulings have made unions very afraid. In fact, Kavanaugh’s own senate hearing was the best argument for not enabling privileged wealth in the US. But now, workers are well and truly screwed, and so are we as a nation.