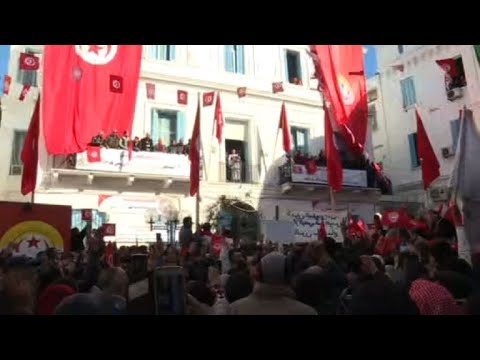 (Informed Comment) – In North Africa, leftovers of “Arab Spring” protests have entered their ninth year. In Morocco, the last few years have been marked by a wave of anti-government protests throughout the country since the “Arab Spring”: the Rif hirak (movement) in the north decrying economic and social injustice; Zagora’s “thirst protests” in the south denouncing potable water shortages caused by massive irrigation investments in watermelon production; Jerada’s protests in the east condemning the lack of an alternative development model to the closures of its mines in 1998; and Imider’s tenacious protests in the southeast since 1996 railing against a silver mine over land, water, and unemployment.

Human rights activists, protestors, and progressive journalists continue to face repression, cruelty, intimidation and harassment; scores of protestors have been arrested and several activists and journalists were sentenced to heavy prison terms. While much of the reporting on these protests has focused on economic marginalization driving people into the streets, real or virtual, my contention is that these protests are not exclusively triggered by economic issues but have also been shaped by the continuing state of contempt and humiliation, or what North Africans call al-hogra.

The word al-hogra comes from the Arabic ihtiqaar, meaning contempt, humiliation, and degradation. In North Africa, al-hogra is a loaded term used in colloquial Arabic (al-darija) to express feelings of injustice, indignation and resentment related to one’s helplessness in the face of the absence of the rule of law, a state of powerlessness, and a set of individualistic and collective behaviors or practices rooted in a repertoire of political, economic, legal, and administrative domination.

Al-hogra means many things to different people in different places and life stations, and at its simplest meaning refers to contempt and to the arrogant elitist and discriminatory attitudes that condone abuse of power, exploitation, humiliation, injustice, violence, and sometimes murder against the vulnerable and the powerless of society. In short, it is a judgment of others as inferior human beings and as unworthy of humane interactions.

Although the use of the concept of al-hogra is common in everyday conversations, it was only in 2001 that the concept rose to national prominence when the Algerian Democratic Movement deployed it to denounce the corruption of the Algerian state (Bennis 2016). Since then it has gained widespread acceptance in framing public discontent and anger which sparked the uprisings of the February 20 Movement (Morocco’s version of the “Arab Spring”) in 2011, and the ongoing protests in the country. Today, the term has been broadened to include a wide range of feelings of deprivation and resentment which are rooted not only in everyday interactions among Moroccans but also in the ways in which the post-colonial government has conducted its political, social, and economic development programs.

Al-hogra occurs when some individuals feel that they or the group they belong to are deprived or disempowered vis-à-vis other groups, individuals, elites, or other institutions. Because al-hogra has dynamic properties and is context specific, its manifestation cannot always be anchored in absolute materialism. It also stands for dissatisfaction and frustration with the status quo and is used as a vehicle for social mobilization around overlapping rights such as the right to work, to education, to health, to housing, to justice, to equality, to ethnic and linguistic diversity, to religious freedom, to potable water and electricity, to dignity and respect and so on.

Because of its capacity to sum up people’s multidimensional struggles and grievances and its pervasive deployment in oppositional local and national politics, one can safely make the claim that it embodies Mauss’ (1966) “total social phenomena,” that is, “an activity that has implications throughout society, in the economic, legal, political and religious spheres” (Edgar and Sedgwick 2008, 76).

Mohamed Bouazizi, the Tunisian street fruit vendor who set himself on fire on December 17, 2010, in response to the confiscation of his goods and the humiliation that he said he was subject to by Tunisian police and municipal authorities, embodies al-hogra and what it looks like in practice. Bouazizi’s self-immolation against al-hogra ignited the pro-democracy uprisings of the “Arab Spring”, which shook the foundations of authoritarian rule and are still unleashing a vibrant process of social and political change in the region and beyond. In Morocco, starting in October 2016, the Berbers (Imazighen) of the Rif, a region on the Mediterranean coast, have been carrying out one of the lengthiest demonstrations of public discontent and rage against al-hogra since the Arab Spring in 2011.

Reminiscent of Bouazizi’s precarious tragic end, the Rif’s protests were triggered by the horrific death of 31-year-old fish seller, Mohcine Fikri, in October 2016, who protested the impounding and destruction of his swordfish merchandise. While Fikri tried to reclaim his merchandise from the trash compactor where it had been dumped by the police, he was crushed to death by the compactor. Mobile phone videos of the incident showing a crushed Fikri quickly went viral on social media, igniting a wave of public outrage and disgust inside and outside Morocco. The “grinding” of Fikri, framed by protestors as an act of martyrdom of al-hogra (shaheed al-hogra in Arabic), has produced a steady pace of unrest in the Rif and throughout Morocco, sustained by discontent and anger over corruption, human rights abuses, contempt, and social exclusion.

As such, the concept of al-hogra allows us to better understand struggles of the powerless and underprivileged in North Africa not along isolated parts of social reality but rather through intersectionality (Crenshaw 1989) where various social, economic, legal, political, ethnic, and religious relationships overlap. Al-hogra structures power relations between the ruling political and economic elites and the vulnerable and neglected populations and it is grounded in daily micro-practices of indignation and injustice visited upon those bereft of power and social capital.

For the vulnerable population, while al-hogra sums up and expresses the composite aspects of frustration with the personal and collective consequences of botched economic development and corrupt institutions, it also provides a vehicle for framing issues and feelings of unworthiness and inferiority, making them comprehensible and visible to the individual and the group, and providing a path with specific courses of social mobilization, action, and inclusion.

Hsain Ilahiane is Professor & Head, Department of Anthropology and Middle Eastern Cultures at Mississippi State University. As an applied socio-cultural anthropologist, his research endeavors deal with an array of themes from small-scale oasis farming through international migration and resource management to information and communication technologies for development. He has carried out his research in Northern and Sub-Saharan Africa, specifically in Morocco, Uganda, Kenya and South Africa, and his areas of theoretical interest are globalization, development and information and communication technologies, and political ecology.