As a social historian, the answer to this puzzle seems to me perfectly clear. African-Americans are more vulnerable to the coronavirus because they have been kept disproportionately poor by systematic American racism and classism. That slogan about $15 an hour for a minimum wage? That would vastly increase the annual income of African-Americans.

And, of the 10 million new unemployed since the coronavirus lockdown, most of them just lost their health insurance because it was tied to their job. And what you want to bet that the 10 million are disproportionately minorities.

Then there is that problem of poverty. African-American unemployment rates are historically twice those of whites. And unemployment only measures those between jobs for a year or so, not those that long since gave up looking, a group among whom African-Americans are disproportionately present.

Sociologists have recently shown that “‘Job applicants with white names needed to send about 10 resumes to get one callback; those with African-American names needed to send around 15 resumes to get one callback.’ A job applicant with a name that sounds like it might belong to an African-American – say, Lakisha Washington or Jamal Jones – can find it harder to get a job.” A white candidate with a better resume got 30% more callbacks. For people with clearly African-American names, the better resume did not matter nearly as much. And that’s just a 33% difference in callbacks. Imagine the difference in hiring rates.

African-Americans also suffer from high rates of imprisonment, and a prison record hurts employment chances. African-American men are six times as likely to be jailed as whites. They are often jailed for offenses that would not get a white person incarcerated, as the Ferguson investigation demonstrated.

So African-Americans are disproportionately poor, and are clearly being kept that way by the US system. Poor people don’t have the luxury of social distancing because they have no savings and can’t miss work if they are to eat. (Imagine the cheek of a coddled wealthy actor like Ronald Reagan alleging that the poor are mainly welfare cheats, when mostly they are the hardest working people in the country). And, they don’t have money for an automobile, so they ride the bus. They also don’t have cable TV and don’t have much of a stake in the information system set up for wealthy Americans. They aren’t necessarily getting health alerts. They aren’t highly educated, what with not having the money to go to college (see below).

Then, they are disproportionately urban, and urban populations are dense and depend on mass transit. Hence the massive toll on New York, where until recently people were actually riding the metro.

African-Americans, being poor and urban, also have a lot of health problems of the sort that make people vulnerable to Covid-19. We burn coal for electricity and run our buses and automobiles on petroleum, both of them dirty fossil fuels that cause asthma and lung and heart disease– the conditions that are implicated in coronavirus deaths. That’s right, the same burning of fossil fuels that is wrecking planet earth has all along been wrecking the health of the American public, and especially urban African-Americans. Fossil fuel pollution is typically much greater in urban areas. In Detroit, fossil fuel companies actually conspired to store highly polluting “pet coke” along the Detroit River.

It is depressing to note that where an African-American head of household has a college degree, its median net worth is still far lower than that of a household headed by a white person with just high school.

About a 33% of Americans over-all have a Bachelor’s degree. Only 13% of African-Americans do, according to Blackdemographics.com. 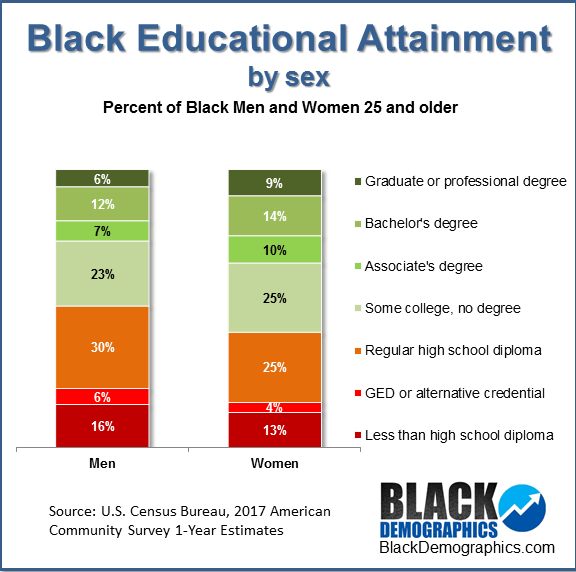 It has been argued that one source of this inequality is that African-Americans are on average younger than whites, and old people generally have much more money than the young.But if we just take those people born in the 1980s, there is still a big racial wealth gap, and one that will increase as these millennials age: 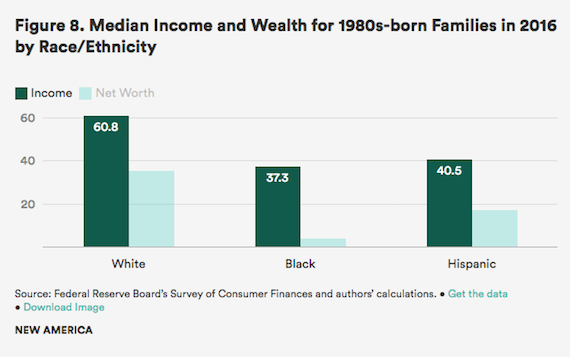 The problem has been getting worse.

The big Trump tax cut for the super-wealthy in 2017 handed hundreds of billions of dollars over the next decade to that class, which is almost entirely white.