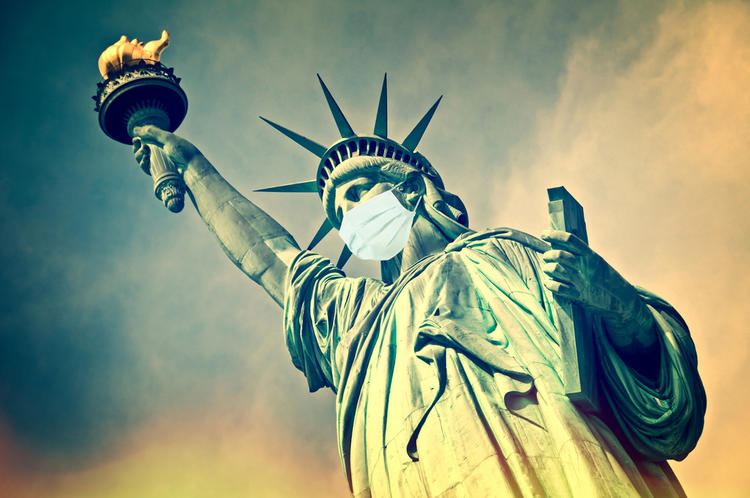 While Europe and Asia track down three-digit infection spikes at worst, the U.S. is dealing with over 40,000 a day.

(Foreign Policy in Focus) – If the United States had quick-thinking and efficient leadership, the pandemic would have infected about 100,000 people and killed only a couple thousand. That’s the experience of South Korea, times seven to account for the difference in population.

If the United States had overwhelmed but reasonably sensible leadership, the coronavirus pandemic would have racked up somewhere near a million infections at this point and killed about 36,000 people. That’s what would have happened here if we’d had a German-style response.

Instead, as of the beginning of July, the infection rate in the United States is a world-leading 2.6 million and the death toll has topped 126,000. There are countries with worse death rates per million people, but with a couple exceptions they’re either small (like Belgium) or presided over by leaders (like Boris Johnson in the UK) as idiotic as ours.

That is tragic enough. But now comes Act Two.

If the United States had practically any administrative team other than the Trump-Pence clown show, it would have at least flattened the curve at this point, no matter how many infections and deaths had occurred during the first wave of the outbreak. Americans would then be cautiously enjoying their summers, bracing for a second wave of infections that most epidemiologists have predicted for the fall.

Instead, while Europe and much of Asia are tracking down and containing small pockets of infection that reach at most into three digits, the United States is dealing with its highest daily number of infections yet — over 40,000 a day.

Remember those early statistics about how many more tests South Korea was conducting per day compared to what the United States was doing in a week? We are currently suffering the consequences of that disparity. Every day, the United States is now adding three times the number of infections that South Korea has had during its entire outbreak.

The Trump administration’s response to the threat of a second wave is: why wait?

Donald Trump doesn’t like masks. He has refused to wear them. He has ignored the advice of health officials, members of his administration, and his congressional enablers. Trump is such an outlier on the mask issue that even Dick Cheney has consented to being photographed wearing facial protection.

Astonishingly, the president said, in an interview with The Wall Street Journal, that some people are wearing masks “to signal disapproval of him.” To the extent that people associate Trump with Death itself or are wearing masks so that they can live long enough to vote the Grim Reaper out of office, the president is right. The pandemic in America has indeed become all about Trump: his appalling ineptitude and sociopathic cruelty.

Masks are just the tip of the iceberg toward which the president is steering Titanic America. Trump was warned multiple times that an indoor campaign rally in the middle of a pandemic was not a good idea. A group of Tulsa citizens and businesses launched a legal effort to stop the event from happening on the grounds that it would only contribute to the ongoing spike in infections. The Oklahoma Supreme Court put the kibosh on the legal challenge.

Trump not only went ahead with the rally last month, he seemed to do everything possible to ensure that it would be a public health hazard. His advance team had eight people who tested positive with the disease. His organizers removed stickers from seats that were designed to maintain a modicum of distance between audience members. In the end, the 6,000 people who showed up were all crowded together like sardine superspreaders. Most followed their leader by not wearing masks.

Tulsa subsequently experienced a new uptick in COVID-19 cases, though it’s not clear how many can be traced back to the rally. That’s because Oklahoma has an inadequate contact tracing system.

Not content to help boost the numbers for the coronavirus in Oklahoma, Trump then went on to Arizona, where he stopped at a megachurch for a rally with student supporters. Such churches have been the epicenters of new outbreaks in Oregon, West Virginia, and Texas. At the Arizona event, neither Trump nor many of his young worshippers wore masks. Trump told them several times that the United States was “at the end of the pandemic.”

Trump has done just about everything to distract Americans from the second wave of infections engulfing us. He has deployed racism (“kung flu”) to defect responsibility. He has studiously avoided the topic of the pandemic. He has claimed that the numbers are up because of more testing (wrong).

Even the Trump administration doesn’t have Trump’s back on this one. The vice president now wears a mask and urges others to do so as well. The health and human services secretary, Alex Azar, is not reassuring in the least: “The window is closing, we have to act, and people as individuals have to act responsibility,” he said recently. “We need to social distance, we need to wear our face coverings where we can’t social distance, particularly in these hot zones.”

Meanwhile, many governors are demonstrating that idiocy is not the monopoly of the president.

Florida’s Republican governor, Ron DeSantis, refuses to mandate the use of masks. Houston’s spike in COVID-19 hospitalizations has maxed out the capacity of the intensive care units at city hospitals. Republican Governor Greg Abbott’s response? He told the hospitals to stop reporting that particular statistic because it was generating negative headlines. Peekaboo: if we close our eyes, the pandemic will magically be over.

Of course, if people didn’t listen to Trump or their death-defying governors and simply stayed home, they could collectively flatten the curve. But no, many Americans have flocked to beaches, bars, churches, and dance clubs. They’ve been egged on by cheerleaders for a fast economic recovery who are either genuinely concerned about unemployment and widespread bankruptcies or fear that Trump can’t win reelection without a rapid rebound.

In some cases, the cheerleaders themselves have become victims of their own heedlessness. The head of Reopen Maryland, Tim Walters, came down with the coronavirus last week. It was not, alas, a Saul-on-the-way-to-Damascus moment: he hasn’t changed his views on reopening, wearing masks, or sharing contact information with government tracers.

Instead of getting the message, too many people are going after the messengers. The Washington Post reports that attacks on public health officials who counsel safe behavior have been particularly intense in Ohio, California, Georgia, and Pennsylvania. In Colorado, according to the executive director of the Colrado Association of Local Public Health Officials, “80 percent of members had reported being threatened and more than that were at risk of termination or lost funding.”

It is any wonder that the European Union, when contemplating the opening of borders to travelers and tourists, decided to continue to ban Americans?

This week, Europe will welcome visitors from around the world. With a few exceptions, those will not be American visitors. Who gets in instead? Rwandans, Tunisians, Uruguayans, Serbians, Moroccans, Japanese, South Koreans. Oh, and just in case you think there’s a North American bias, Canadians are welcome as well. And if China lifts its ban on European visitors, then Chinese will soon be taking their summer holidays in Paris and Rome.

If America manages to get this second wave of infections under control, Europe will reconsider. But why should Europe reconsider?

I’m reminded of those pictures of people you see posted at convenience stores — shoplifters, scam artists, stolen credit card users. Those photos are a reminder to the scofflaws not to return to the scene of the crime. Europe has posted an American flag at the passport control booths at its airports. Americans are the world’s scofflaws.

Too many Americans have proven themselves to be entirely irresponsible when it comes to the health of the community. That goes for too many public officials as well, from mayors to governors to the president himself.

So, it makes sense for the world to keep its distance, not just six feet but an entire ocean if possible. The entire country should be quarantined until we stop electing public health risks to office and, as a citizenry, start acting like adults instead of kindergartners who feel compelled to eat every marshmallow in sight rather than postpone gratification until it’s safe to indulge.

It’s not just America, of course. The virus continues to rage in Brazil, India, and South Africa. The head of the World Health Organization, Tedros Adhanom Ghebreyesus, points out that “although many countries have made some progress, globally, the pandemic is actually speeding up. We all want this to be over. We all want to get on with our lives, but the hard reality is that this is not even close to being over.”

In the good old days, like four years ago, the United States for all its flaws would have been at the forefront of addressing this public health emergency.

Let’s face it: we are now the public health emergency.