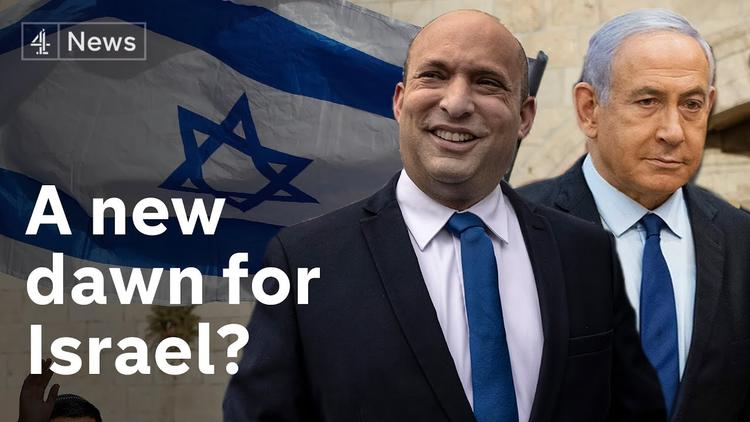 Oakland, Ca. (Special to Informed Comment) – Israeli PM Benjamin Netanyahu and former President Donald Trump have both steered their countries, parties and political ships to the far-far right; in pursuit of greater power; fueled by hate, intolerance and corruption. But now some of Bibi’s allies are jumping ship to form a new government. Republicans meanwhile, refuse to abandon Trump, and chose to remake their party in his fascist image. Facing charges of breach of trust, bribery and corruption, Bibi managed to delay his trial by the convenience of the Covid pandemic, and arguing that attempts to oust him are a politically motivated witch hunt. As Trump makes the same argument, he and Bibi have become a two-headed monster that feeds off fear, ignorance and a devotion to manufactured grievances.

The Likud Party has dominated under Bibi’s leadership for 12 years, and shifted even farther to the right when empowered by Trump, his sycophant Ambassador David Friedman, and the dark prince Jared Kushner. By granting Bibi and Likud their entire wish-list, including the disingenuous Abraham Accords, these men paved the way to the explosion of the recent 11-Day conflict. In Bibi and Trump’s fantasy world, the Palestinian cause didn’t matter, so they marginalized it out of the discussion, along with the two-state solution. With Bibi waning, right-wing parties are finding strange bedfellows on the left, with which to form a government, and retain a vestige of power. They know Bibi’s ship is sinking fast and are bailing for their own political lives, ideological purity be damned.

Bibi’s political dominance has paralyzed Israel through four inconclusive elections in the past two years. The likely successor, Naftali Bennett is an ideological podmate of Bibi, who gained power pressing all the buttons on right-wing wedge issues including opposition to the two-state solution and expansion of illegal settlements. (They have a gift for inspiring mixed metaphors.) Under the power-sharing agreement, he will serve as PM for two years, followed by MK Yair Lapid for the remaining two, IF the government holds that long. This unusual power-sharing agreement includes Raam, an independent Arab party in the governing coalition for the first time in history. But its fragility may be offset by the recognition that Bibi’s agenda has been destructive for Israel and the worldwide Jewish community. (Anti-Zionism has morphed into Anti-Semitism for many ill-informed people.) Should the coalition collapse, Lapid would be the more likely political survivor poised to form a new government.

Not all devout Jews are also devout Zionists, though AIPAC has brainwashed much of the American Jewish community into believing that Zionism MUST be a central tenant of modern Judaism. That one is a religion and the other is an ideology, born at the end of the 19th Century through centuries of deep-seated anti-Semitism, and forged by the Holocaust; is lost on many Jews. And as more American and European Jews recognize the brutal hypocrisy Zionism has become; they are questioning, objecting and withholding financial support. This has led Likud to more readily embrace Evangelical Christians, whose “love” for Israel is a perverse dynamic, considering it is motivated by an apocalyptic vision of a world without Jews. But their perverse “love” for Israel is welcomed by right-wing leaders, despite the underlying “hate” for Judaism, as a matter of political survival. What could be more counterintuitive than a Jewish state favoring Evangelical Christians over Jews?

Bennett now recognizes that Bibi has become an existential threat to Israeli society and the independent judiciary. His remaining in power could light a fuse for World War III, so Bennett is jumping ship to avoid enabling the collapse of Israel and a truly apocalyptic conflagration. While some Christians look forward to the Apocalypse as a spiritual goal, most are more interested in prolonging their lives on this earth and avoiding hellfire and brimstone for themselves and their children. Jews holding to Messianic visions also have a sense of mortal preservation, and Bibi’s agenda threatens them too.

Though the proposed government reflects the diversity of Israeli society, it may be unworkable because of the conflicting agendas of its members. Naftali is unlikely to change his devotion to expanding the settlements, or get on-board with police reform and other issues favored by the left. Raam’s participation is motivated by the hope for more resources and greater rights for its citizens, and hoping to repeal discriminatory housing and land-use laws.

The fly in the ointment is Knesset Speaker and Bibi loyalist Yariv Levin, who has the power to delay a confidence vote on the new coalition until June 14. This gives Bibi and Likud time to persuade some coalition members to abandon the proposed government, and Bibi one last chance to benefit from the resulting chaos. He would remain as a “caretaker” PM should that unfold. With Trump’s help, Bibi killed the peace process and ignited the May war with Hamas. Re-igniting conflict would benefit him politically. As with Trump, Bibi has demonstrated a willingness to sacrifice Israeli lives for his selfish political ambition. He has also attacked the judges in his trial and the functional obligations of the Israeli judicial system, as did Trump in losing numerous court challenges to the 2020 Election. The prospect of a total collapse of Israel’s judicial system and economy is what brought Bennett to finally oppose him.

Time and again, Bibi has undermined American political and economic interests, along with Palestinian rights and a viable two-state solution. Some of this has taken the form of brazen violations of American and International Law. Bibi’s interference with the Iran nuclear deal is an example of his selfish destruction, as was his effort to show up President Obama on a state visit in 2019. He also sabotaged the Oslo accords, George Mitchell’s diplomatic efforts at the beginning of President Obama’s first term, John Kerry’s efforts in 2014, and openly campaigned for Trump. No other president or prime minister has dared interfere with American electoral politics, except of course Vladimir Putin. And that is the most revealing reflection of Benjamin Netanyahu, his willingness to play Putin at the expense of democracy in Israel and America.

Channel 4 News: “Israel in “political chaos” as Netanyahu’s time as leader runs out”