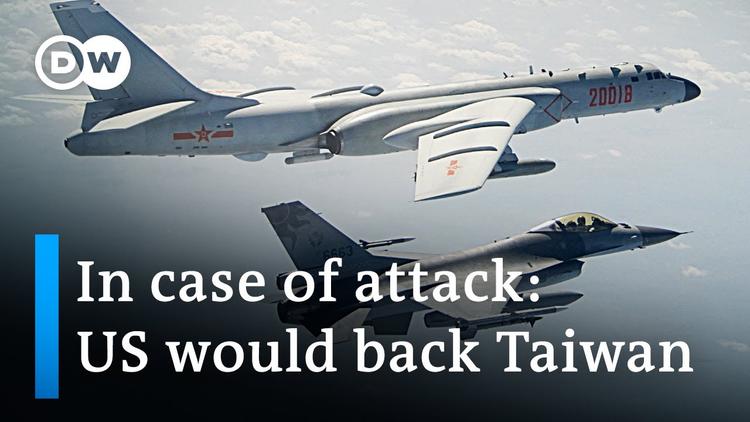 ( Foreign Policy in Focus) – When he was running for office in 2008, Barack Obama wanted to put an end to the war in Iraq in order to focus U.S. troops and resources on the conflict in Afghanistan. This August, the Biden administration finally withdrew the remaining U.S. troops from Afghanistan. It’s hard not to get the sense that it has done so in order to perform a similar military pivot—this time toward China.

After all, U.S. policy toward China remains as provocative today as it was under Trump. Tariffs and economic sanctions against Beijing remain largely intact. Little has been done to resolve disputes on trade, security, and human rights. The Pentagon is cutting back on the kinds of weapons it was using in the Middle East in favor of munitions more suited to the Pacific theater. There hasn’t been much in the way of cooperation on the major global problems of pandemic and climate change. Biden and Chinese leader Xi Jinping have barely talked with one another, though there are plans for a virtual meeting by the end of the year.

All of that would suggest merely a continuation of the cold war that has settled on U.S.-China relations since the tail end of the Obama administration.

But recent events point to the possibility of the cold war turning hot.

In early October, China sent 150 jets into Taiwanese air space. Although Beijing periodically tests Taipei’s air defenses, this was a record number of incursions. And the flights came after military exercises the month before that looked suspiciously like a dry run of an invasion of the island with China launching missiles into the sea south of Taiwan and conducting an amphibious assault on a beach in southern China. It was enough to prompt Taiwanese Foreign Minister Joseph Wu to announce that his country was preparing for a war that “we will fight to the end.”

For those primed to expect the worst from China, it looks as though Xi Jinping has cracked down on the Uyghurs in the far east and consolidated control over Hong Kong all so that he can now focus his attention on the central prize of speeding the “reunification” of Taiwan with the mainland. China’s more strident nationalism and more robust military capabilities under Xi are not the first steps of a new Chinese imperialism. But the People’s Republic of China (PRC) has never viewed Taiwan as a foreign country to be conquered so much as a rebellious province to be subdued.

The problem lies not just with China. The United States has been subtly altering its longstanding policy of “strategic ambiguity” as it relates to the triangular relationship connecting Washington, Beijing, and Taipei. The United States has recognized the PRC as the “one China” and kept its relationship with Taiwan strictly unofficial. As part of this policy, Washington hasn’t extended diplomatic recognition to Taiwan but nevertheless sends heaps of military hardware in that direction.

The Trump administration, however, began to elevate relations with Taiwan. Trump himself set the stage as president-elect by accepting a congratulatory phone call from Taiwanese President Tsai Ing-wen, the first direct communication between U.S. and Taiwanese leaders in nearly four decades. In 2020, Health and Human Services Secretary Alex Azar and Undersecretary of State Keith Krach were the highest-ranking officials to visit Taiwan since 1979. Also in 2020, the administration announced more than $5 billion in arms sales to the island. And in 2021, as one of his last acts as secretary of state, Mike Pompeo abolished prohibitions against meetings between U.S. and Taiwanese diplomats.

Although Biden was careful not to take any congratulatory calls from Taiwan, his administration did not roll back Pompeo’s decree. In fact, U.S. and Taiwanese diplomats met for lunch in France in early May, prompting a stern rebuke from Beijing. The U.S. ambassador to Palau also visited Taiwan last spring. Meanwhile, the administration authorized its first military sale to Taiwan in August: $750 million worth of howitzers and similar artillery. It sent warships through the Taiwan Strait eight times in the first eight months of 2021, and American troops have been conducting training sessions with Taiwanese forces for the better part of a year.

Influential voices outside the administration have been urging the United States to put an end to strategic ambiguity and more vigorously support Taiwan. Richard Haass, the head of the Council on Foreign Relations, made this case in a September 2020 issue of Foreign Affairs: “Ambiguity is unlikely to deter an increasingly assertive China with growing military capabilities.”

Some members of Congress want to act accordingly. At a recent Politico event, both Thom Tillis (R-NC) and Ami Bera (D-CA) supported the abandonment of “strategic ambiguity.” And Elaine Luria (D-VA) recently joined her Republican colleagues in calling for legislation that authorizes the president to use military force to defend Taiwan.

And The Washington Post has called for—ugh, not this again!—an increased Pentagon budget to push back against China.

Even as it encourages more effort from Taiwan, Japan and others in the region, the United States itself needs to invest more heavily in the hard-power assets — especially naval forces — required to back up its commitments in East Asia. The president, however, proposed a defense budget that barely kept up with inflation, albeit with $5.5 billion earmarked for deterrence in the Pacific. On a bipartisan basis, the House has approved a bigger spending plan, with money for 13 new ships. That might impress China more than even the sternest words.

Some of this posturing reflects an understandable frustration that the United States has done so little to stand up for the beleaguered Uyghurs and the besieged residents of Hong Kong. Analysts and lawmakers want to draw a more clearly visible red line through the Taiwan Strait. Unlike Xinjiang and Hong Kong, Taiwan is not legally part of the mainland. Surely the United States would stand up to aggression against a prosperous, democratic state even if it’s not a member of the United Nations and is only recognized by 14 countries (plus the Vatican).

The question is not whether the United States should or should not go to war with China over Taiwan. The question is: how can we best avoid such a war?

The usual argument against any imminent Chinese attack on Taiwan is that Beijing knows that it would suffer a tremendous economic blow if it were to do so—on top of the military casualties it would incur. The problem with this argument, of course, is that Beijing experienced just such an economic shock in 1989 in the wake of the crackdown on the Tiananmen Square protests—and survived the few years it spent in the time-out corner. Since that time, China has both become more economically powerful and developed institutions independent of the IMF and World Bank that can function, in effect, as a global economy of its own. China, in other words, is better prepared than in 1989 to weather the West’s disapproval.

China’s calculation would not, however, be purely economic. China might decide that it doesn’t have a choice but to launch a war across the strait—not so much to force the issue of reunification with Taiwan but to avoid being fully encircled.

Consider the big movie hit in China today: The Battle at Lake Changjin. Much has been made about the propaganda value of Chinese moviegoers cheering the spectacle of Chinese soldiers beating back American GIs during this key Korean War battle.

The film, though, is about the Chinese not only prevailing over the U.S.-led UN forces in North Korea at the battle of Chosin Reservoir in 1950 but the People’s Liberation Army helping to break through the encirclement of enemy forces and preventing the collapse of North Korea. If China attacks Taiwan, it may similarly view the campaign as a defensive maneuver to push through the encircling forces of the United States and its allies.

Tightening the military containment of China, then, is precisely the opposite of what the United States should do if it wants to avoid a war in the region. Beijing will not so much be deterred by such displays of strength as incited by them.

What, then, is the alternative?

The first step is to bring together a broad coalition of analysts and policymakers who believe it’s a terrible idea to dispense with strategic ambiguity. The participants in this coalition could have a range of opinions about economic relations with China. They could be rightly concerned about events in Xinjiang and Hong Kong. They could be strong advocates of Taiwanese independence. What draws them together is one thing: the importance of avoiding a war with China.

In the last five years, the right has successfully pushed the political debate in Washington in a distinctly anti-Chinese direction. It’s time to push back by brokering an anti-war coalition that draws from the broadest possible range of opinion leaders.

The second step is to identify a concrete agenda of U.S.-Chinese cooperation. The two countries have no choice but to cooperate on reducing carbon emissions, strengthening pandemic response, and curbing nuclear proliferation. The United States and the Soviet Union found ways to cooperate during the worst years of the Cold War. Washington and Beijing have far stronger economic ties and shared global responsibilities. Despite differences on a host of issues, China and the United States can work together for mutual benefit.

Ending the two-decade war in Afghanistan will eventually redound to Biden’s benefit—but not if he starts an even costlier conflict with China. Obama discovered soon enough the disadvantages of jumping out of the Iraqi frying pan and into the Afghan fire. A war with China would be no mere fire. It would be a world-altering catastrophe.

Biden says US would defend Taiwan against China | DW News